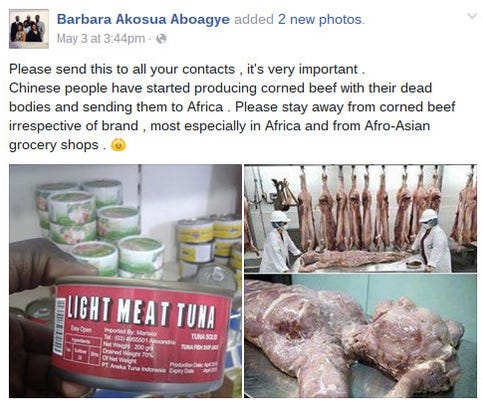 (Source) — China has been forced to deny claims that it is marinating dead bodies, canning them and selling them as a meat product in Africa, after a bizarre Facebook hoax went viral. Rumours of the alleged trade in human meat first began circulating on social media thanks to a series of photographs of what appeared to be skinned people in a meat factory. Zambian press was accused of encouraging the rumours, after publishing articles that quoted alleged sources from inside the Chinese meat factories. According to the alleged sources, the idea to use human meat came when China ran out of space to dispose of its dead. Others claimed Beijing preferred to save its ‘good meat’ for richer, more powerful countries. But China’s ambassador to Zambia has issued a furious denial of the allegations. Today a local tabloid newspaper is openly spreading a rumour, claiming that the Chinese use human meat to make corned beef and sell it to Africa,’ said Yang Youming, according to China’s Xinhua news agency. ‘This is completely a malicious slandering and vilification which is absolutely unacceptable to us. We hereby express our utmost anger and the strongest condemnation over such an act.’

Everyone involved with this story needs to chill the fuck out. The people freaking out that the Chinese might be marinating human meat for corned beef? Get off your high horses. The moment you decide to order Chinese food you give yourself to God. I don’t care if it’s Chinese food purchased in an African supermarket or ordered in a 15 minute, surprisingly tense telephone call: if you’re buying Chinese meat, you’re signing an agreement that you won’t ask questions about what you’re putting in your mouth. That’s why you never bite half of a General Tso’s chicken, you put that whole nugget in your mouth and swallow. You don’t want to see the inside of it. You just chew and don’t think about the cat/dog/leftover Chinese dead body you might be consuming. Best case scenario is you hate yourself in 30 minutes as you look over a desolate wasteland of half full containers, worst case scenario is you just became a cannibal, that’s the Chinese food contract we all agree to.

And you, the Chinese ambassador to Zambia, you need to relax too. Take it easy with the “furious denials” and “completely a malicious slandering and vilification” quotes. This thing went viral for a reason, ok? It went viral because it wouldn’t be all that shocking if it was true, so save your outage. It’s like when someone accuses me of doing something extraordinarily stupid at 2 AM on a Saturday, I don’t come out guns blazing and condemn them to hell because I’ve done extraordinarily stupid things before. You just need to tell the world “Hah! Nah, that wasn’t me. Would’ve been ridiculous though,” over Sunday brunch and carry on with your day. These fervent denials just make you seem more suspicious.