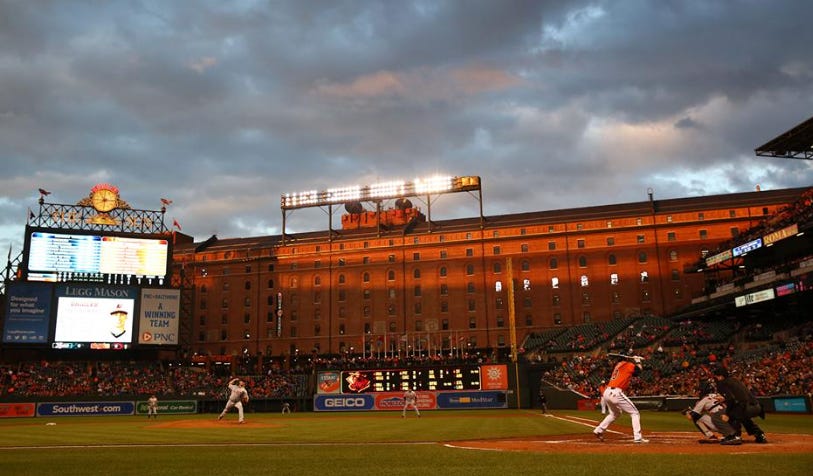 Seems like just yesterday I was slugging brews at Camden on Opening Day, now we’re 1/4th of the way done, oh how time flies. As an Orioles fan, you have to be happy with where the team is, percentage points in front of Boston for first place, how many people besides me would have predicted that? They sit in first place with a record of 24-15, including an MLB best 17-8 at home.

To get to 90 wins they only need to go 66-57, that’s not out of the question with how well they play at home. Everyone is still talking about the Red Sox and their red hot offense….but look at the standings, and who is in first, even with their “mediocre pitching”. Despite the Orioles latest series loss to the Mariners, a very good team this season, they’re in good position, lets look at some bright spots, and what needs to improve after the first quarter. 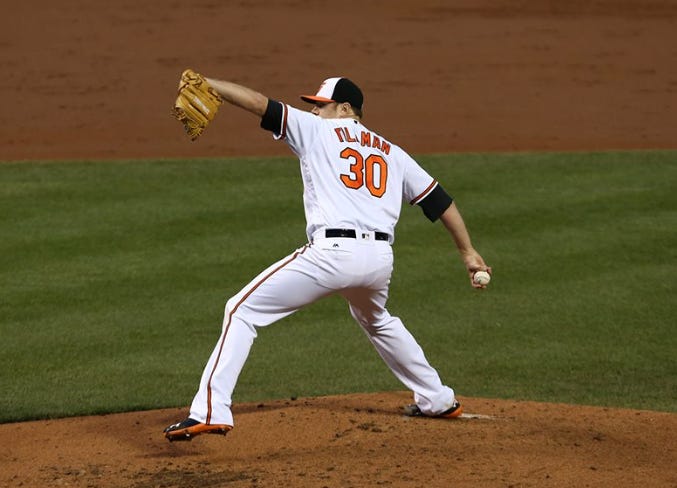 Some bright spots have come out of this middle of the pack rotation, those being Chris Tillman, and Kevin Gausman. We knew Tillman had the stuff to be an All Star, we saw it in 2014, he seems to be back at that level. He’s 6-1 with a 2.61 ERA, tied for 2nd in wins, and 8th in ERA. He is shutting down both righties and lefties, and most importantly, he is keeping the ball in the ballpark. He’s only given up 2 homers this season, after giving up 20 last season. It’s nice to have 2014 Tilly back, hopefully he maintains this throughout the season.

The other impressive pitcher has been the guy we were all waiting for. Gausman will be the next great O’s pitcher, it is just a matter of when. He looks like a totally different guy on the mound compared to last year, his pitches look better too. His start on Saturday (5.0 IP, 10 H, 4 ER) was his worst start of the season, and other than that he has been money. 0-1 on the season with a 3.00 ERA with 24 Ks, and a WHIP of 1.07. If he had any run support at all, he’s have some wins. It is a bit concerning that righties are batting .288 off of him. Gausman will continue to show us why he if the future ace of the O’s. 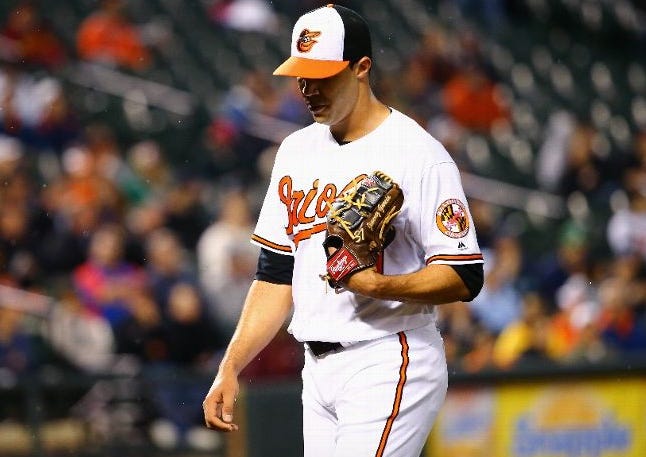 The guys who have underperformed in the rotation, pretty much everyone else. I talked about it last week, Ubaldo Jimenez (2-4 5.60 ERA) has been so up-and-down, it’s so frustrating to watch him pitch, you can tell by his first pitch which Ubaldo we are getting. Tyler Wilson and Mike Wright have both shown flashes, but then they seem to hit a speed bump, and are brought back down to earth. Yovani Gallardo has been hurt, but seems to be coming back soon, have to wonder if Buck inserts Gallardo into Ubaldo’s spot and gets Ubaldo out of the rotation and into the pen. Overall the starters have been a pleasant surprise, some people said this would be the worst rotation in baseball, but they are 16th in the MLB with an ERA of 4.43. 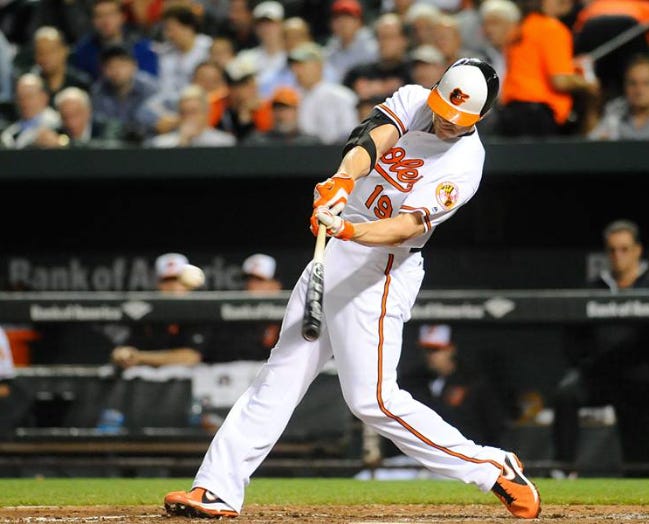 It’s been exactly what we thought it would be. Very home run heavy, disappears at times, but has the ability to break out of a slump and hang 6+ runs in an inning. They’re 14th in runs, 12th in hits, 2nd in HR, surprisingly only 24th in Ks, 7th in Avg, and 9th in OBP. Overall, those aren’t bad numbers, good enough for first place. This is what we thought they would do, minus the low strikeout numbers. I expect the offense to keep this pace, hitting balls out of the park, going cold for a few games, but being one of the better offenses in the league.

Individually, each guy has had to carry the team for a bit. Manny started out hot, and is looking like the frontrunner for the A.L. MVP Award (51 hits, 16 doubles, 11 HR, 25 RBI, .319). Then it was the Mark Trumbo show, he’s currently putting up 47 hits, 5 doubles, 12 bombs, 29 driven in, and batting .309. A great addition to the heart of the lineup, and the guy who makes it so you have to pitch to Machado, Davis and Jones. Speaking of Adam, he hasn’t been his normal self this season, but showed signs of life last week, bringing his numbers up to .244 with 5 bombs, and 11 driven in. 4 of the homers have come this month, and he’s batting 60 points higher than April. Glad to see him getting back on track. Jonathan Schoop has also been hitting well after a slow start. Schoop has shown that he will be one of the best overall second basemen in the game, it’s just a matter of time. 7 home runs and 23 RBI for Schoop, to go along with his .255 average.

Some of the guys who haven’t produced like we thought they would, have to think Hyun-Soo Kim jumps to mind. After the offseason pickup, everyone (including myself) expected him to bat .270+ with 20+ homers. Then came the terrible spring training, and his refusal to be demoted to AAA. He is now holding a roster spot hostage, and has only played sparingly. 30 at bats in the 39 games, but has has gone 11-29 (.379, .455 OBP). He has shown little to no power, and doesn’t look good in the field. Ryan Flaherty and Caleb Joseph, after combining for 80 RBI last year, have the same amount as I do this season. I know it’s tough to contribute when you aren’t getting consistent at-bats, but give the club something. J.J. Hardy looked good before he got hurt, but still wasn’t producing like we thought he would. Wieters has looked better as of late, driving the ball to all fields last game, but has to be more consistent. Joey Rickard was the talk of the town in April, he’s sort of turned into a pumpkin now. And Pedro Alvarez has shown that he was hurt by signing so late and getting to camp late, he’s had some hard hit balls recently, but it would be nice to see the old Pedro and his power.

The most consistent part of the team, except for Brian Matusz, has been this shut down pen. O’Day had a hiccup last week when he gave up the back-to-back homers on consecutive pitches, but you won’t see that happen the rest of his career, fluke plays. He’s been his normal self with his 3.00 ERA, and 20 Ks in 15 innings. Zach Britton continues to shine in the closer role, even getting a 5 out save a few nights back. One of the most dominating closers in baseball, and no one talks about him. Same with Brad Brach. 3-0 with a 1.29 ERA and 24 ks in 21 innings. Michael Givens has returned to his old self, and just look at his Ks to IP, 25 in 16 innings.

Dylan Bundy has been good in his time out there, and continues to show that he has a place on this team, especially since he is essentially a rule 5 pick. An unsung hero out of the pen, and the guy who has saved the bullpen from a few long outings is Vance Worley. Worley has come in sone bad spots, and shut the other teams out. Nice to get that production from a guy who doesn’t really have a role on the team.

Brian Matusz can kick rocks, get this clown off of the team. I have been waiting to find out if he knows that Buck has bodies buried somewhere. I can not think of one logical reason he is still on the team. GTFO.

Two teams the O’s need to beat up on and take some wins from. Carry on the success from the first quarter, and keep it going Birds.