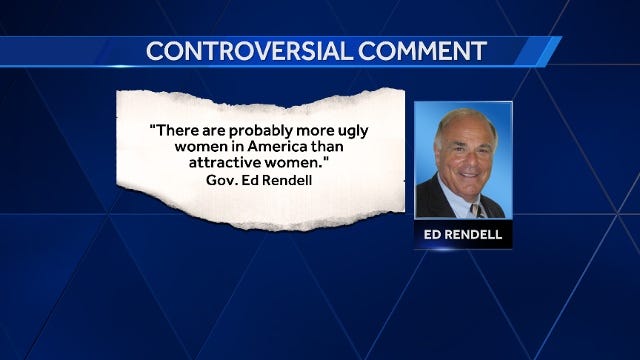 NYDN – Former Democratic National Chairman and ex-Pennsylvania Gov. Ed Rendell, a Hillary Clinton backer, did his best Donald Trump impersonation Wednesday, saying the GOP front-runner’s condescending comments about women will backfire because there are “probably more ugly women in America than attractive women.” In an eye-opening interview with The Washington Post, Rendell, 72, was discussing Trump’s electoral prospects in the suburbs of Philadelphia, the city where Rendell was mayor from 1992 to 2000, when his comments suddenly began to resemble the mogul’s. “Will he have some appeal to working-class Dems in Levittown or Bristol? Sure. For every one he’ll lose one and a half, two Republican women. Trump’s comments like ‘You can’t be a 10 if you’re flat-chested,’ that’ll come back to haunt him,” Rendell said. “There are probably more ugly women in America than attractive women. People take that stuff personally,” said Rendell, who is a superdelegate in the Democratic race backing Clinton’s presidential bid.

The Gov’ from the top rope! Nothing like a 72-year-old aging potato making general stereotypes based on looks. See, he’s both right and wrong here. He’s incorrect that people aren’t going to vote for Trump just because they fell off the ugly tree and hit every branch down. Have you been to a bus station in rural West Virginia or backwoods Mississippi? Me neither. But I’d venture to say a fair amount of Trump die-hards in those spots look like they have way too much chlorine in their gene pools. It doesn’t matter. Red States are gonna Red even if Hitler himself was on the ticket. But Rendell is spot on about there being more ugly women than attractive broads in this great nation of ours. Just the way it is. Jerry was right, 95% of the population is UNDATEABLE. My Lego included. Thank God for alcohol.

PS – I respect the man, but can we please get Ed Rendell the FUCK off Post Game Live of Eagles games? We’re going to have enough time with this team without his fanboy reactions that provide zero insight. Just have Ray Diddy talk sweet nothings into my ear for an hour and call it a show.