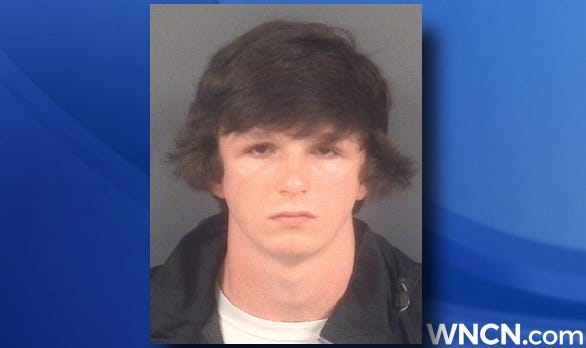 WNCN - An 18-year-old Hope Mills man has been charged after he was caught on camera defecating on a Cumberland County elementary school’s playground, officials said. Rockfish Elementary School staff reported cleaning up human feces from the children’s playground over the past few weeks.

Bruce Morrison, Rockfish’s safe schools coordinator, installed cameras around the playground to catch the culprit in action. A suspect was captured on video soon after the cameras were installed. That footage was shared with the Cumberland County Sheriff’s Office.

Robert Christopher Elliott, 18, of Hope Mills and his juvenile brother were identified as being the suspects caught on camera. Deputies said not only did they defecate on the playground but they also took photos of it.

Real talk- is it really that hard not to be a fuck boy? What ever happened to smoking weed on the back porch then watching Super Troopers and playing video games? Is that not a thing anymore? We live in a time where we hold the world in the palms of our hands. Video games are basically virtually reality. Girls have replaced the “I like you, do you like me?” note with nudes on Snapchat. And this guy has to take a poop on a playground? And with a bad haircut to boot? Get the fuck out. We tolerate a lot of bullshit, but serial playground dumpers does not and should not be one. Can you imagine being this little kid, full of life and optimism, world is your oyster, and then you go down the slide and get a fist full of poop? You’d be scarred for life. You’d never trust again. Years and years of therapy wouldn’t erase that memory. All because this kid Robert Christopher Elliott and his little brother wanted to drop logs and take pictures. I hope they throw the book at him. I hope he gets one of those “creative judges” and is forced to shovel horse poop on a farm for the next 15 years. Don’t fuck with little kids just trying to go down a slide, it’s not that hard of a rule to follow.