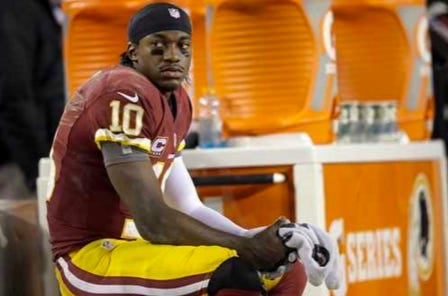 I’ve been putting off this blog all day because J Reid writing about RG3 is like the sun coming up, it happens every day and it’s never anything new. But now that he’s over at “The Undefeated”, a new ESPN blog focused on race and sports (oh fun!), he wrote 8 billion more words rehashing every old story about Griffin and his time in DC. It’s become the biggest story in sports today, because of course it is. Today’s article focuses mostly on his relationship with Shanahan and Snyder, as we’ve read about for the last 3 years, and how weird it was.

So why is this a story today? Well for 1, because the Undefeated launched yesterday, J Reid is a swinging dick over there who had to make a splash, and RG3= clicks. So Reid got to his typewriter and summarized the last 3 years of football in DC…but he had to make it about race too.

Hooray, a new twist on a tired story! The thing is, the majority of the article isn’t about race, it just tries so hard to be. Race isn’t why he couldn’t complete passes or go through his progressions. Race isn’t why he became bff’s with Dan Snyder.

The part of the article that is making the most waves is this part, which I’ll share without comment: 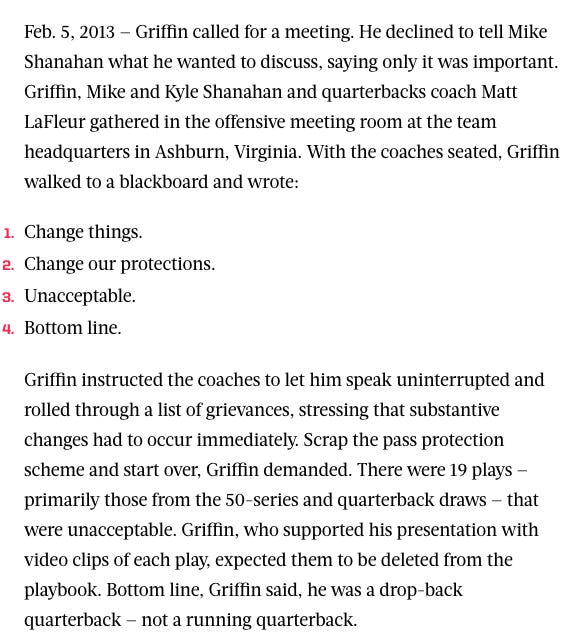 At first that seems rather weird. But the more I thought about it, the more I kinda don’t see the big deal about it at all. If Peyton Manning wanted to change the playbook, would anyone care? If Tom Brady wanted to do the same, would it be a big deal? RG3, coming off a Pro Bowl and Rookie of the Year campaign, just shredded his knee into a zillion pieces and didn’t want to run 19 plays. I wouldn’t be the least bit surprised if things like this happened in every NFL QB’s career.

But at the same time, an owner and a young QB can’t be best friends. An owner can’t put his one player before the team and the coaches. And that’s what Dan Snyder did with Griffin. See how things aren’t just black and white, but you can see things from all angles and sides? The result, of course, is a complete clusterfuck which led to his demise in Washington.

So I guess Reid has gotten what he wanted- he’s all over the blogs and ESPN and the like today because of this article. He’s made a living on RG3 articles, so this isn’t surprising. I was taken so off guard by it this morning, we knew basically 90% of that article already. But the Undefeated had to come out swinging and gain them clicks, and they did just that.