And that’s how it began. An innocent enough Tweet, right? A 49ers columnist who has a working relationship with Jed York and the 49ers offering to buy them lunch if a new stadium was built. Well, here’s a lesson for the kids- don’t make bets you don’t want to pay off.

Sporting News - He lost the bet, and was willing to pay up, but didn’t expect to pay up quite as much as he did. A few weeks ago on his podcast, Kawakami told the story (for the first time) about what ended up happening with the bet. Kawakami, a few reporters, York and York’s wife were all going to meet up for the meal. The initial tweet was to eat lunch at a local restaurant, but York changed it into dinner at French Laundry, which is a very (very) fancy restaurant.

York said he would pay for his wife’s meal, but when the bill came “he doesn’t move, he doesn’t budge.” The reporters paid for their parts of the bill, but Kawakami got stuck with three-fifths of the bill, which ended up being $2,100. He also tried to get York, a billionaire owner, to pitch in a little on the tip, but to no avail.

“If I thought Jed was sticking it to me, I’d almost be OK with it,” he said. “I don’t even think he knew. I don’t think he knew what $2,100 means to a sportswriter who didn’t inherit a billion-dollar team.” Kawakami said he was “stunned” by the fact York stuck him with the bill and that this story is a perfect explainer into the owner’s mind. 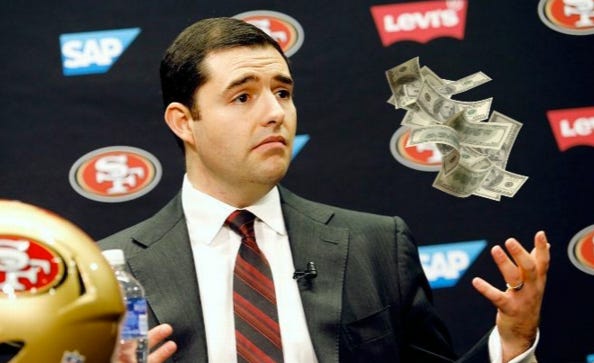 When you lose a lunch bet to a billionaire, you better be ready to pay up. It’s not exactly shocking that a billionaire has no concept of the value of money. He never has to worry about how much it costs to get a caesar salad instead of the mixed greens. He never has to take out his phone and figure out how much to tip. Billionaires just float through life, owning football teams, and having $2,100 lunches without a care in the world. Can’t hate them for that at all, but when you make a bet with one, you better realize that’s what you’re getting into. I’ve been in a similar situation- I was in Vegas with rich poker friends when I had about $1,000 to my name (great decision to go to Vegas with no money, Nate!). We went out to dinner and 4 of us played credit card roulette for the meal. Hey, 75% chance I don’t pay for my food, why the fuck not! Welp, ever get stuck with a $200+ check with $1,000 in your bank account. Zero. Fun. Sir. But that’s the price you pay for making the bet to begin with. You can’t try to weasel your way out of it. You can’t try to claim it’s not fair. Kawakami thought him and Jed York were going to have lunch at Panera Bread? For sure not. I just don’t get why he was so “stunned” he was stuck with the check. That was the bet! He’s acting like the kid who turns off Madden when he’s losing. Don’t be that kid. Now that this is a big story York will probably reimburse him, but he shouldn’t have to. A bet is a bet is a bet, and it should have ended right there at the table.