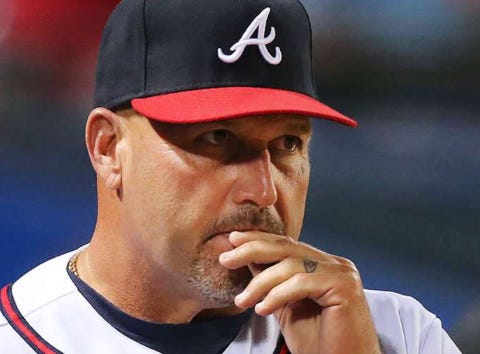 PITTSBURGH — Finding out you’ve been fired is never easy, but imagine finding out the way that Braves manager Fredi Gonzalez did late Monday.

An hour or so after the Braves’ 8-5 series-opening loss to the Pirates, a person familiar with the situation said Gonzalez received an email notifying him of his scheduled flight to Atlanta on Tuesday afternoon.That was a bad sign, since the four-game series in Pittsburgh runs through Thursday.

Gonzalez and general manager John Coppolella have been addressing rumors about Gonzalez’s job status for weeks, since the Braves were losing their first nine games of the season on the way to a 9-28 record through Monday. So when he got the email, it had to be a bad sign for Gonzalez.

The Braves had made the decision to fire him and booked his commercial flight home Tuesday, but didn’t plan to tell him he’d been fired until Tuesday morning, after president of baseball operations John Hart flew to Pittsburgh to join general manager John Coppolella.

Later Monday night after getting the email, Gonzalez eventually had confirmed by Braves top officials what he already was certain about by then: He was fired.

When Gonzalez spoke to the AJC on Tuesday after leaving Pittsburgh, he declined to discuss details of when and how he found out he’d been fired, though he did talk about the decision that many around baseball had thought was inevitable after the franchise-worst 18-loss April.

Can’t even imagine the feeling of seeing that “You can now check in for your Flight” email pop up when you didn’t even know you booked one. That’s your boss telling you he needs to see you in his office but on steroids. Fired by an annoying auto-alert from fucking Delta. Absolutely ruthless. The biggest take away here is not the firing and the manner of which it went down, it’s that the Braves have officially passed from horrible to dysfunctional. That’s not a place you want to be. It’s like the Trestman Bears, you could handle the losing, you could handle the ineptitude, but when they stopped giving a fuck and leaks in the locker room occurred and people were snitching on each other left and right, that’s when it became a dysfunctional mess that you wanted no part of. It’s one thing to have your Coach fired by an email, it’s another to have that story get out and be 100% true. That’s when you know the ship isn’t sinking, it’s officially sunk. Poor Fredi, spinzone for you my friend, you could have been Ricky Renteria getting fired 2 seconds before the Cubs actually got good again, at least the Braves are still in the deepest part of the rebuild right? You were getting fired no matter what this year, just didn’t know it would be by a check in email from an airline.