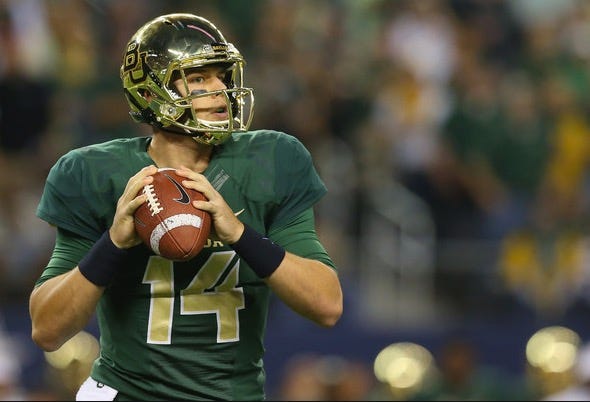 NORTH CALDWELL — Former Baylor star Bryce Petty knows he has some critical practices coming up this spring and summer, as he tries to show the organization he is worth retaining.

And as he approaches those practices, Petty believes he is much more advanced than he was last year, when the Jets drafted him in the fourth round. One way Petty notices his significant progress — by playing the Madden video game.

Last year, he was a developmental quarterback facing a steep learning curve. Now, he understands the nuances of playing in the NFL much better (like recognizing defensive tendencies), after he watched and learned last season, while not playing at all.

“For me, where I was when they drafted me last year to where I am now, it’s night-and-day difference,” Petty told NJ Advance Media on Monday at Jets linebacker David Harris’ charity golf event, which benefits the Give the Kids Hope Foundation. “For me, it’s a process. Just watching film, I’m seeing things.

“I played Madden the other day, and it’s not just picking run plays anymore. It’s like, ‘Oh, they’ve got an under front [on defense].’ You start picking up things differently. That’s exciting for me.”

Absolutely no clue why everyone is giving Bryce Petty a hard time for this comment. Only thing I can think of is that none of these people have played Madden lately? That they’re still picturing like Madden ’95 where you had 4 plays to choose from and ran “sweep” or “pass” every time with these 2-bit polygon players? Pick up the sticks and a copy of the new Madden when you get a chance. Boot up your Xbox One or PS100 or whatever is out now. That shit is as close as you can get to a real football game without actually putting cleats and a helmet on.

I mean you can’t even play a fucking game in Franchise mode until you do like 80 hours of Practice Mode. Practice on a video game! Running plays on air. And you need it too, to have any chance. You can’t just throw a pass, you gotta add the direction of the pass, the amount of touch on the pass, then control the receiver to catch it high in the air, on the run, down low. It’s bananas.

And that’s not even mentioning the coverages, which is what Bryce is talking about here. Play in All-Madden mode – you have to read every sort of coverage from a legitimate NFL playbook, and if your pass isn’t perfect it’s a guaranteed interception. And have you seen half of these NFL coaches? You’re telling me computer software running analytics and algorithms isn’t smarter than a lot of them?

Listen if Bryce Petty is sitting in his basement eating XL bags of Cheetos with a headset on playing 11 year olds in Kansas 24/7 then yeah, you have a problem. But assuming he’s actually, you know, playing real football and training most of the time, he’s 100% dead on with the Madden comments. That shit is more real life than real life.