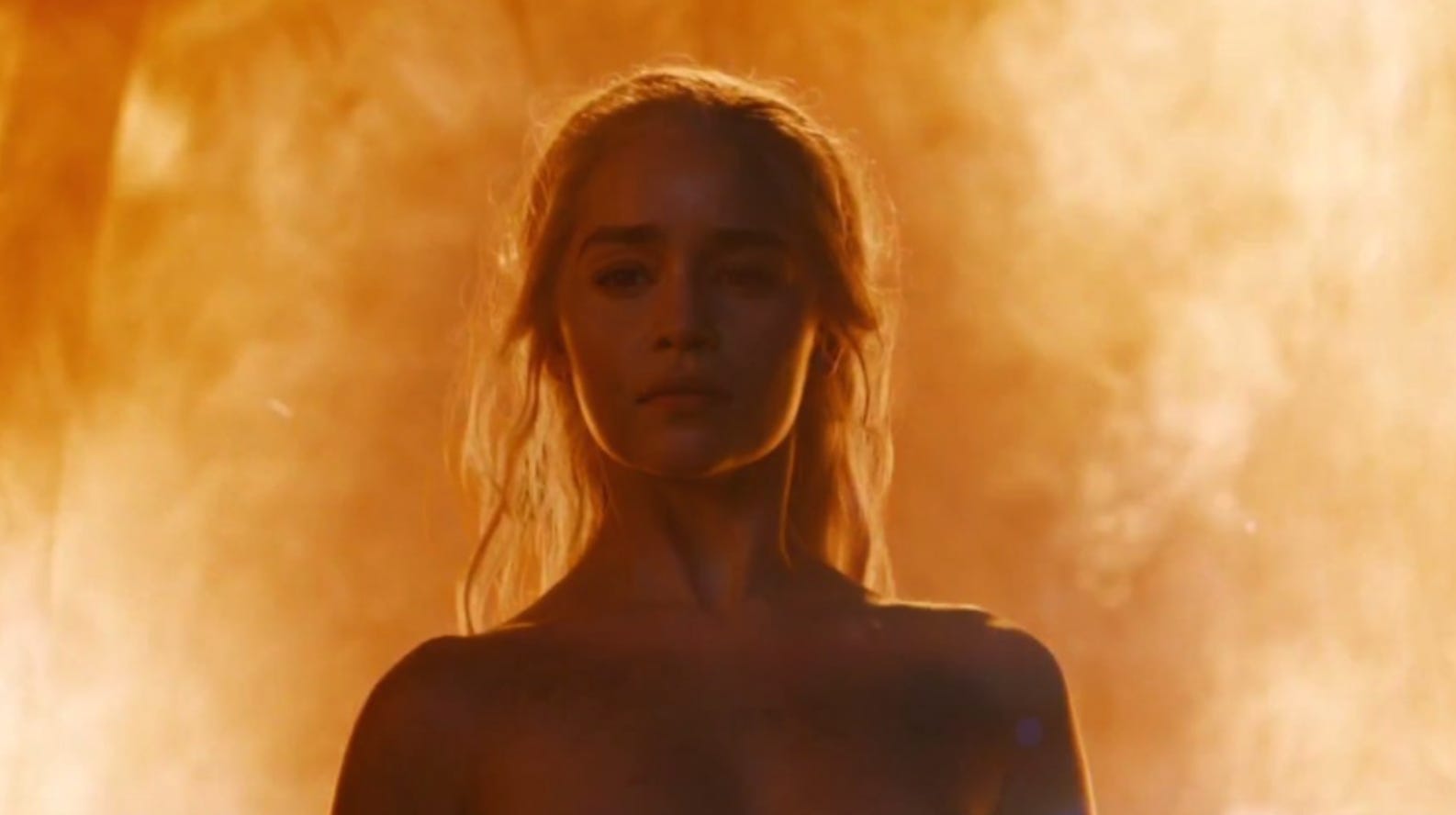 Mashable- “The Unburnt” has a secret. The final scene on this week’s Game of Thrones shows Khaleesi emerge from the Temple of the Dosh Khaleen as a fiery goddess who used her dragon’s blood to topple the Dothraki patriarchy and gain thousands of warriors in the East. It was badass, and the Internet loved it — except for the part of the Internet that has read A Song of Ice and Fire. Book readers immediately pointed out a key detail altered in the show: Daenerys Targaryen is not immune to fire. Fans of the show will most likely recall and question the epic moment in season 1, episode 10 where Dany sits atop Khal Drogo’s funeral pyre and remains in tact (minus clothes, plus three dragons). But that moment, according to ASOIAF author George R.R. Martin, was just a one-time occurrence of blood magic. “Targaryens are not immune to fire,” Martin said during a discussion with fans. “The birth of Dany’s dragons was unique, magical, wondrous, a miracle. She is called ‘The Unburnt’ because she walked into the flames and lived. But her brother sure as hell wasn’t immune to that molten gold.”

Cry me a fucking river. Listen up, Game of Thrones book readers. It’s a brave new world. Remember during the first five seasons where you felt superior because you knew what was gonna happen and you held it over our heads like a sword made of Valyrian steel? Well those days are long gone. Everybody is on equal footing. Anything is possible now that the TV show has caught up to the books. You don’t like that? Well then tell your boy George RR Martin to get those fat fingers typing and put a damn book out. It’s not the show runners fault that it takes George 20 years to write a book. HBO and the people want their Game of Thrones episodes and they want them now. And since George hasn’t given them the information they need to proceed, they’re gonna start free styling it. Oh you thought Khaleesi was only immune to fire sometimes? Nope, it’s all the time now. That’s the only way that Dothraki scene works. Deal with it.

I love this. I really do. Like I said above, book readers were such assholes during the first five years of GOT. Remember when the Red Wedding happened and every non-book reader lost their mind? There were hundreds of YouTube videos of people literally crying because they were so shocked. Ask a book reader how they felt after the Red Wedding happened. “I knew it was coming.” FUCK YOU. This is how it is now. Book readers have to be shocked along with the rest of us and they hate it. Ain’t no fun when the rabbit’s got the gun.