In case you missed it this weekend, Russell Wilson used his Wisconsin commencement speech to take his NC State bridge, apply bombs to each leg of it and set the entire thing ablaze in a massive fire.

…Through Wilson’s stories of advice and what to do “when life tells you no,” he also angered some fans of his first school, NC State.

Wilson said former NC State football coach Tom O’Brien told him he couldn’t come back to play his senior year for the Wolfpack after spending the summer playing minor league baseball, which prompted his transfer to Wisconsin.

“[O’Brien] said: Listen, son, you’re never going to play in the National Football League. You’re too small. There’s no chance. You got no shot, give it up,'” Wilson said, per Eifling. [B/R]

“The summer before my senior year of college, I’m playing minor-league baseball. I called my football coach at NC State and said, ‘Hey coach, I’d like to come back for my senior year.’ He told me I wasn’t coming back. He said, ‘Listen son, you’re never going to play in the National Football League. You’re too small. There’s no chance. You’ve got no shot. Give it up.’ Of course, I’m on this side of the phone saying, ‘So you’re telling me I’m not coming back to NC State? I won’t see the field?’ He said, ‘No son, you won’t see the field.’ Now this was everything I had worked for. And now it was completely gone. If I wanted to follow my dream I had to leave NC State. I had no idea if I would get a second chance somewhere else. [Backing The Pack]

I get what his point was – that you’ll have doubters and haters and people who tell you you can’t do things, and you have to fight through them and believe in yourself. Pretty solid message for a graduation speech IMO.

But the NC State fan base didn’t quite see it that way. Especially Russ’s former teammate Kalani Heppe: 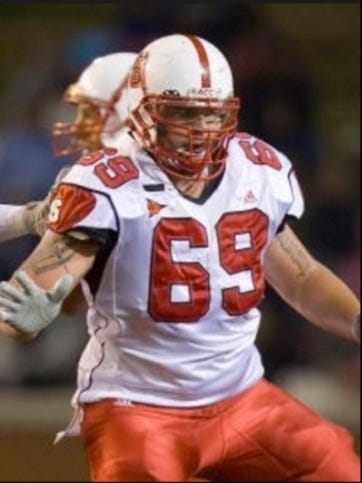 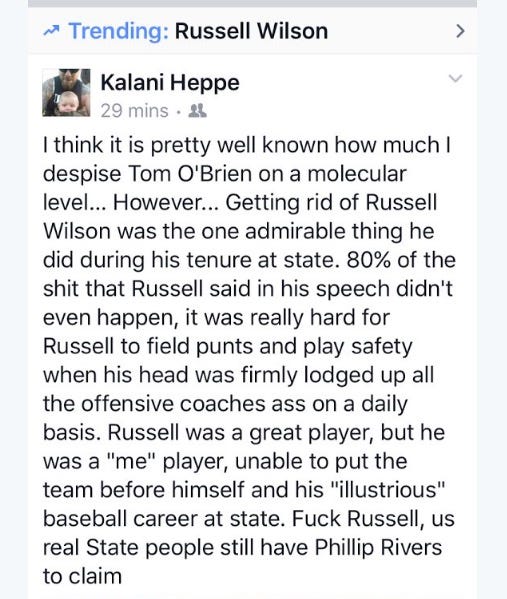 And it wasn’t just that. The Wolfpack faithful weren’t too happy with his baseball story…which turned out to be, frankly, just not true at all.

“Another time life told me no was during my junior year when I was playing baseball. My freshman and sophomore year at NC State, I had about 450 to 500 at-bats. Now it’s the first few weeks of my junior season, the draft-eligible year, and I’m barely playing. And honestly, I don’t know why. This one weekend, we played UC-Irvine. Both teams are top-five in the country. I don’t play at all the whole weekend — nothing. I’m not going to lie. I was pretty frustrated. But my dad used to always tell me, ‘Be ready. Always be ready.’ So I decided I’m not going to complain. Instead, every time our defense comes in and we’re up to bat, I’ll put my helmet on. I’ll put my gloves on — Nomar Garciaparra style. I get my bat in hand, and I stand there waiting — first inning, second inning, third inning. All the way to the 10th. We get to the bottom of the 10th or 11th, and there’s two guys on base with one out. I’m just sitting there with my helmet on looking like a dork, and a guy pops up. Two outs. Then I hear it. ‘Wilson, you’re up.’

“And this guy’s pitching it nasty. I’m talking he’s throwing 125 miles per hour, if that’s possible. I mean fuego. I mean, he’s legit. The first pitch is a slider, and what do I do with it? Swing and miss. Next pitch, a slider in the dirt. Swing again, shouldn’t have swung, strike two. I’m one strike away from losing the game. It’s the first time I’ve played in awhile. The guy throws me a fastball high and inside. I still don’t know to this day why he threw me a fastball. And what do I do with it? Wham! Boom! Game over. Hit it over the fence. Now everyone in the stands that day, they saw the game-winning home run. But they probably didn’t notice the guy who spent all those innings on the edge of the dugout with a helmet on his head and a bat in his hand. But if I hadn’t stayed prepared like that for 10 or 11 innings, that home run, that never would have happened.” 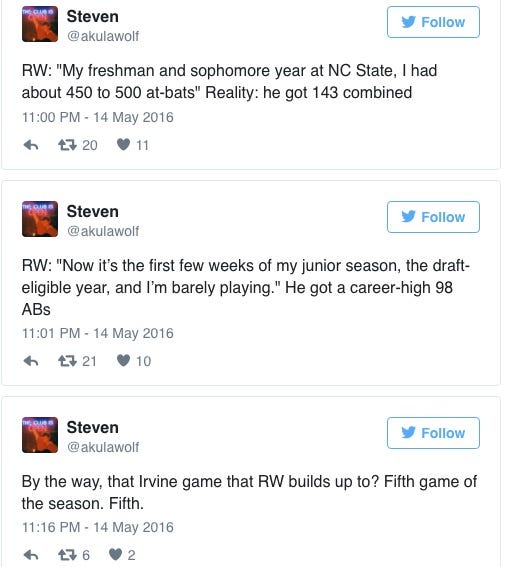 Safe to say we’re on a little bit of an uncontrollable downward spiral for Russell’s image here. From being a weirdo who won’t bang Ciara, to pitching water he thinks cures concussions, to the whole extreme God thing, to the Super Bowl interception, now the entire student body and alumni of NC State want him dead.