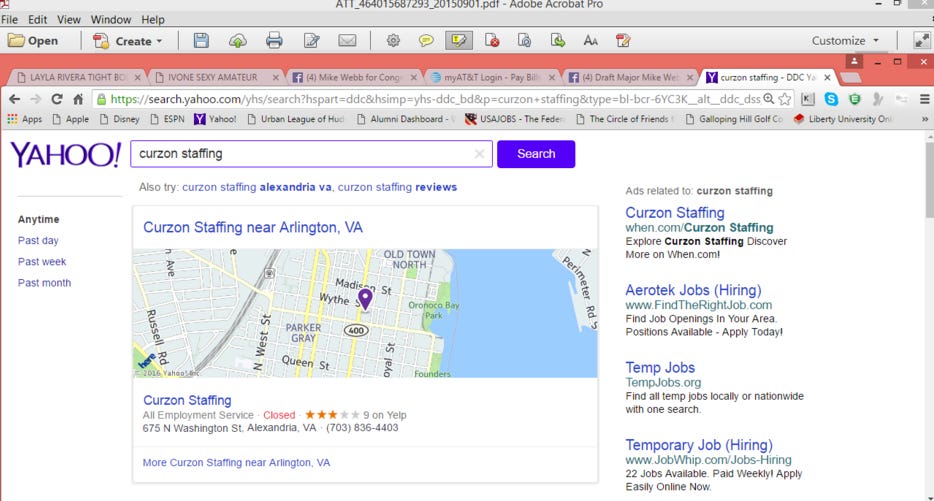 ARL Now - A screenshot posted on the Mike Webb for Congress Facebook page is going viral for all the wrong reasons. The post was intended to suggest that an Arlington County Republican Committee officer might have had something to do with a prank call Webb received. Instead of getting that point across, as of 3 p.m. the post had some 80 shares and 60 comments on Facebook due to an apparent inadvertent inclusion: the screenshot shows two web browser tabs associated with pornography websites.Webb, an Arlington resident, was soundly defeated in his recent bid for the Republican nomination to challenge Rep. Don Beyer (D-Va.), but has announced his intention to run as an independent. In his voluminous press releases and social media posts, Webb has blamed the local Republican establishment for his defeat. There’s no evidence, however, to support the suggestion that the individual named in the post might have prank called him. A Google search for the web page titles in question — “LAYLA RIVERA TIGHT BODY” and “IVONE SEXY AMATEUR” — point to a number of pages on various porn websites. Webb has not responded to a request for comment sent earlier this afternoon.

PS: Using Yahoo is such an old person move you have to love it. Probably would still use Prodigy internet if it was still offered. Definitely still double clicks on links (kids nowadays don’t even know you used to have to double-click on links to open them).