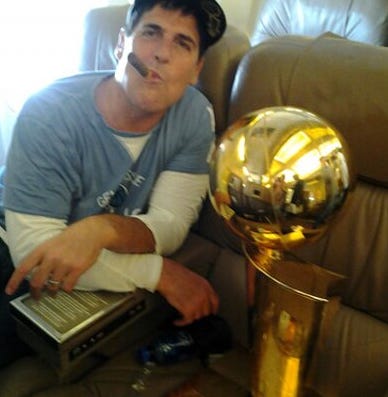 (Source) Mark Cuban told The Washington Post that a group of conservative politicians have asked him to run as a third-party candidate in this year’s presidential election.

The band of Republican politicians, according to the Post, is attempting to block presumptive GOP presidential nominee Donald Trump and believes that Cuban, the outspoken billionaire owner of the Dallas Mavericks, would resonate with voters.

Although he said he would “put [Trump] in his place,” Cuban told the Post that he does not anticipate running for president this year, saying “there isn’t enough time.”

“I don’t see it happening,” Cuban wrote in an email to the newspaper.

Asked by ESPN.com on Sunday if he would consider running for president four years from now, Cuban replied, “No comment.”

Cuban declined to identify the anti-Trump Republicans to the Post, although he did reveal that the conservative group told him that he could challenge Trump because of his “bluster and volume, combined with substance and the ability to connect with voters on a more personal basis.”

“[Trump] could come after me all he wanted, and he knows I would put him in his place,” Cuban said. “All that said, again, I don’t see it happening. There isn’t enough time.”

Cuban, 57, became the Mavericks’ majority owner in 2000 and helped revive the franchise into a perennial playoff team. The Mavericks won their only NBA championship in 2011 and have missed the playoffs only twice in 17 seasons since Cuban bought the team.

Could you imagine a threeway with Cuban, Trump, and Hillary? Holy shit talk about ratings. That would take what is already going to be the weirdest and most entertaining Presidential election of all time and multiply it by a billion. Must watch wouldn’t even describe how must watch those debates would be. And even though I think Cuban is a buffoon for not investing in my brain 2 years ago, I would vote for him in a SECOND. He’s exactly the type of guy I want to be President. He’s Donald Trump with an actual brain in his head.

Here’s my only problem with his statements though. You can’t do the tough guy talk, the “I would put Trump in his place” and then in the same sentence say, no thanks. It’s like saying “I could say something so mean right now but I won’t”. You let the cat out of the bag, you say you can go toe to toe with Donald, now prove it. Give America what it wants. A threeway circus that will divide this country into a million different pieces. I’m giddy just at the idea of it. Need Cuban ’16. I’d even offer him a second chance on my brain, everyone makes mistakes.