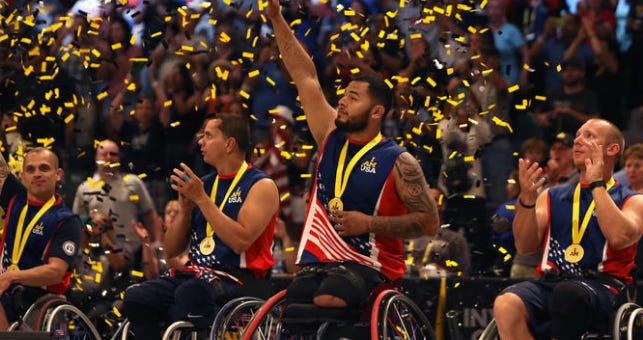 OS – Ater the United States wheelchair basketball team confirmed its dominance with an Invictus Games gold medal Thursday, Javier Rodriguez of St. Cloud uttered this scary thought. “You’ve got big guys, small guys, fast guys, guys who can handle, guys who can shoot,” Rodriguez said. “We had so many alternatives this time, compared to last time. There was a lot more that we could have done if we needed to.” Team USA rolled past the United Kingdom 48-16 in the gold-medal game at Disney World’s HP Field House. In their five contests at the Invictus Games, the Americans allowed 44 points — or four fewer than they scored to seal the gold. Team USA scored 160 points during the tournament and beat the Netherlands 42-9 earlier Thursday in a semifinal.

The Invictus Games (a GREAT event started by Prince Harry solely for wounded warriors on the battlefield) is in full swing and, ho hum, the US is taking other countries behind the woodshed. The wheelchair basketball team alone literally rolled through the field. >