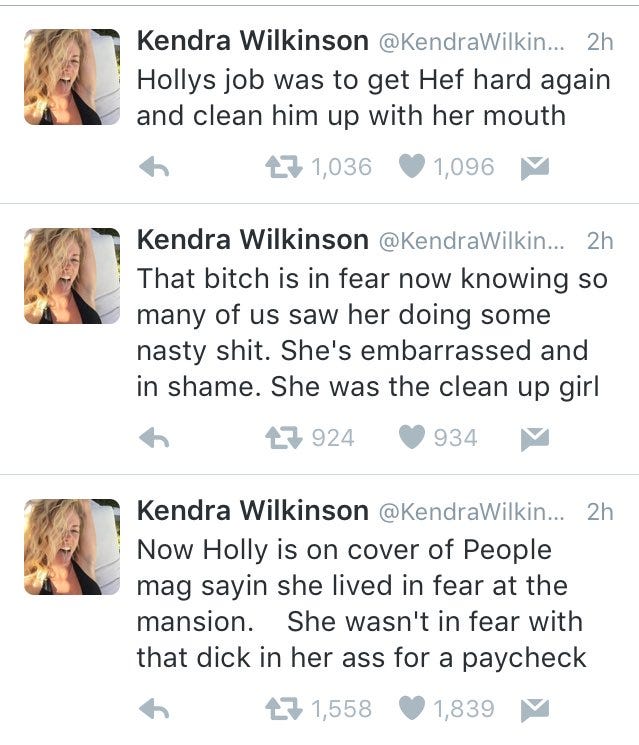 But what I am shocked about is the batting order in the bedroom.

First we have Holly

I figured Holly was the leadoff hitter since she always seemed like Hef’s main bitch. Always was the leader of the group and next to Hef in pictures. I thought she was the one that would go downstairs and get the Viagra and glass of water before working on that limp noodle for 20 minutes or so while staying relatively clean. Then she would tag in Kendra.

I think we can all agree that Kendra was the absolute dick wrecker and did the brunt of the work. The sexiest and most fit, by far. The work horse running back of this three-headed monster. Put the team on her back like Greg Jennings and finish the job. And finally, it would be time for the other one (whose name escapes me because she was always the third hottest and “the other one” in my mind).

I thought she would be the boner resuscitator and “clean up with her mouth” girl. Don’t know anything about her and don’t care, either. Strictly a role player.

Hef treating what appeared to be his ace as the janitor of the whole operation is what’s shocking. Butt who am I to question it? Dude built an entire empire on smut. It’s like when baseball managers used to put in their best relief pitcher to get out of jams regardless of what inning it was. It may be a different strategy for a different time, but the dude has more rings than the Yankees when it comes to pussy. Long live the king.

And there is no real way Holly can fight back in this, because Kendra strikes me as a scrapper. Started from the bottom and fucked her way to the top. Or married an ex-NFL player that cheated on her with a tranny, which is I guess can be considered a happy ending for Kendra. But if Holly goes at Kendra, I would 100% expect Kendra to take a razor blade out from under her tongue like Tupac in Above The Rim. That bitch don’t play. Then again if you were a dime that decided your best career move was to fuck Hef’s old crusty ass, you are basically agreeing to terms and conditions stating that your mouth may be used as Hef’s jizz rag and you probably shouldn’t worry about what people are going to say about you anyway.