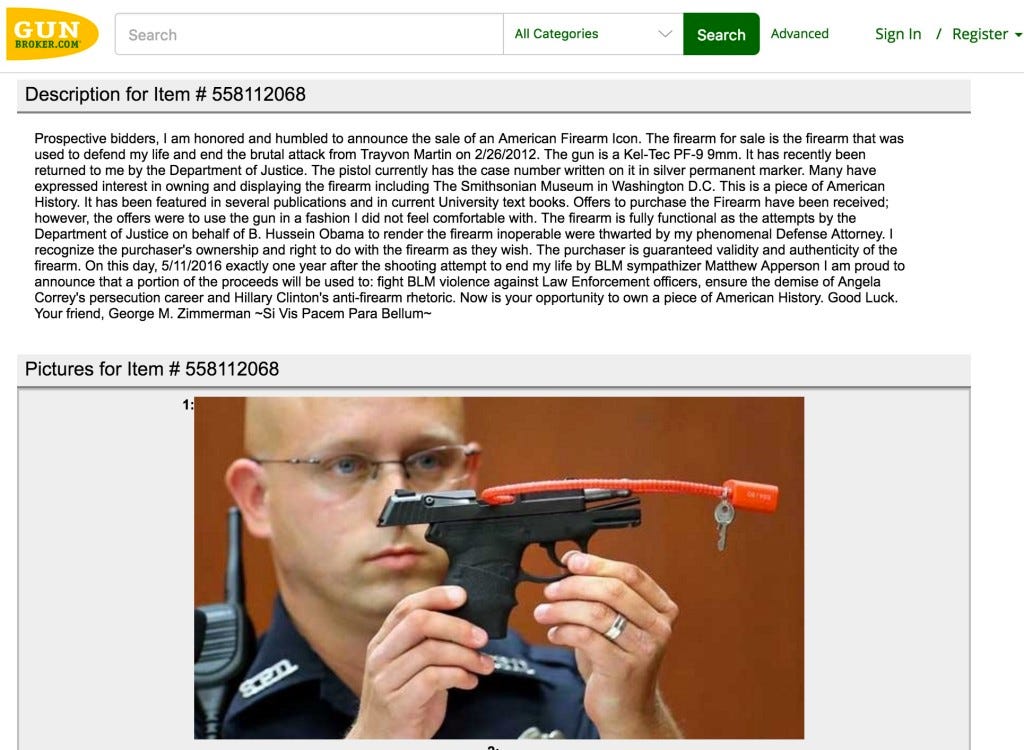 Mic – George Zimmerman, the Florida neighborhood watchman known for shooting and killing 17-year-old Trayvon Martin in 2012, ignited more controversy after announcing Thursday that he would sell the pistol he used to take Martin’s life.

The gun went up for sale on the auction website GunBroker.com, where Zimmerman described the Kel-Tec PF-9 9mm as “a piece of American history,” but as of 11:12 AM, the listing has been removed from the site.

“The firearm for sale is the firearm that was used to defend my life and end the brutal attack from Trayvon Martin on 2/26/2012,” he wrote in a lengthy description. “Many have expressed interest in owning and displaying the firearm including The Smithsonian Museum in Washington, D.C. This is a piece of American History.”

The reserve price of the weapon is $5,000. Zimmerman, who has faced financial problems since the shooting, says some of the proceeds from the sale will be donated to pro-gun causes.

Big move by George Zimmerman here. There’s no denying the scumbaggery of the choice to monetize something so awful regardless of whether you were on his side of the case or not — I assume that’s why the original listing on Gunbroker.com is down but here’s a cached version — but what does George Zimmerman really have to lose at this point? He’s been arrested on domestic violence charges, he’s been public enemy number one for a vast majority of the population in recent years, and he’s broke as shit because even the most “out there” people aren’t willing to prop him up as a beloved figure in any meaningful way. I get wanting to see the guy suffer forever and being completely grossed out by him profiting off of a shitty moment in history for our country but at some point it seems like you have to just let the dude try to move on in his own misguided way. So what the hell, rather than indulge his intentional or unintentional pro wrestling bad guy shit, let George Zimmerman sell the gun in peace. It’s still probably a net win to have one less firearm in his possession regardless.

Also at this point I bet gun people are probably pretty okay if he stops trying to be the face of the fight against people trying to suppress gun ownership. I’m sure they still support his rights to a firearm and to defend himself but after the domestic violence and general bad airs around this dude since the trial ended, I think even gun people who generally will gobble up whatever support they can get would encourage him to keep the proceeds for their causes all for himself. He definitely needs it more anyway. We don’t need to see George Zimmerman trying to market a sex tape to make ends meet.