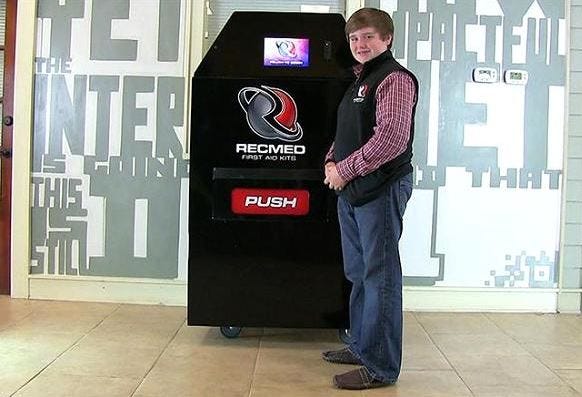 CNBC - Remember that 14-year-old entrepreneur who made headlines for turning down a $30 million buyout opportunity? Well, he has a magic number for selling his vending machine company, RecMed, and it’s a cool $50 million. Taylor Rosenthal, a ninth grader from Opelika, Alabama, launched RecMed last year. While the company has a patent for computerized vending machines that dispense first-aid products, it has not sold any machines yet. He is in talks to sell the machines to “major amusement parks” and is hoping to expand into sporting venues as well. “At the time, I felt the deal wasn’t right — I felt like I wanted to grow and develop the company from what it was, which drove me to turn it down,” he said about the $30 million offer.CNBC caught up with Rosenthal at TechCrunch Disrupt in Brooklyn on Thursday, where the young entrepreneur said he was “hoping” to strike a deal offering him $50 million to sell soon. RecMed has already raised $100,000 from angel investors. Sandler and Rosenthal declined to disclose whom the $30 million offer came from due to a non-disclosure agreement.

When I read this headline I was getting ready to rip my hair out. There is nothing I hate more than getting out moguled by teenage kids. Just getting stuffed in a locker by a nerd who hasn’t hit puberty yet. But then I read this story. This kid is a fucking liar. Seriously why are we even talking about this dork? Oh you’ve sold ZERO machines? You have a whopping 100K in angel investors? And you turned down 30 million, but you can’t say from who? BULLLLLLSHIIIIIIITTTTTTT……BULLLLLSHITTTTTTTTTTT….BULLLLLSHITTTTTTTTT. Honestly why are talking about this? It’s not even that it’s so clearly a lie either. More importantly what’s so unique about his idea? I mean I know nothing about patents and even I know you can’t stop people from selling first aid shit in vending machines. So do me a favor and get this clown show out of my face. Give me back the Deflategate kid. Now that’s science and industry.