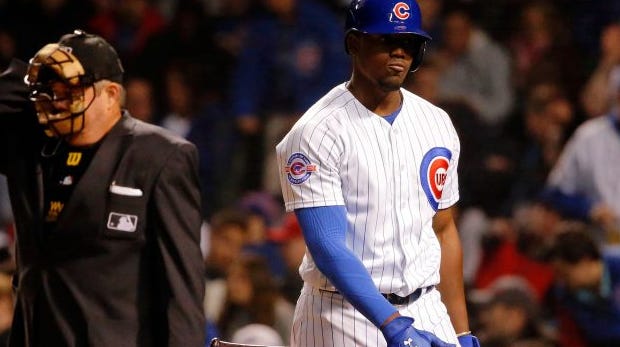 Nothing like a doubleheader sweep to the Padres to bring out the scaries, boys! Now there are two sides to my brain when it comes to this season. One side is the rational side that realizes this Cubs team is tremendous every which way. It’s going to be a summer full of wins and good times. The plan has worked to perfection and the Cubs are going to be a juggernaut for the next half decade.

Then you have the “Cubs side” of my brain. The side of my brain that walked out of the stadium last night and did the sky is falling talk with my buddy as we walked down Clark Street. Strop sucks, Cubs still can’t situationally hit, I don’t trust anyone on the bench to get a big hit, Heyward is in a prolonged slump, what if Arrieta has a third outing of 5 innings yada yada yada. By the time we got to Belmont we basically had the Cubs in last place, dead and buried. After venting about all the “problems” we quickly snapped to and realized how fucking stupid we sounded complaining about a first place team that has won at a franchise record pace through the first 30+ games.

But one issue that isn’t crazy to talk about is Jorge Soler. I think we officially have a Jorge Soler problem. He looks absolutely lost at the plate. Last night he had 4 strikeouts including a bases loaded strikeout in the 8th against a pitcher that had lost his command. Anthony Rizzo walks on 4 pitches before him, Soler gets up and takes a ball, then immediately whiffs on a shin high pitch that would have been the 6th ball in a row. Another couple hard swings that make zero contact and you’ve got your 4th strikeout. I know the line with Soler is he likes to play in the warm weather and he’ll start to heat up when the weather gets hot but it’s way more than a couple of cold May days at this point. He looks totally lost and the only way he will find it is if he gets at bats, something Joe Maddon isn’t going to give him on a regular basis (with good reason). I really don’t know what the answer is. Send him back down to Iowa and let him come out of it, maybe learn to play OF better (he’s sneaky worse than Schwarber in the field). Or let him stay up because sending him down would rock his confidence? Then you have the trade option as he’s been the guy most linked to an in season move, but what can you get for someone hitting below the Mendoza line? It’s an impossible spot that I fully trust Theo, Jed, and Joe will figure out, but it needs mentioning, we officially have a Jorge Soler problem. It’s something we all need to be aware of when judging this entire roster, the depth with Soler and Schwarber is gone. The Cubs are still very very good, but they aren’t infallible by any stretch and it starts with 68.