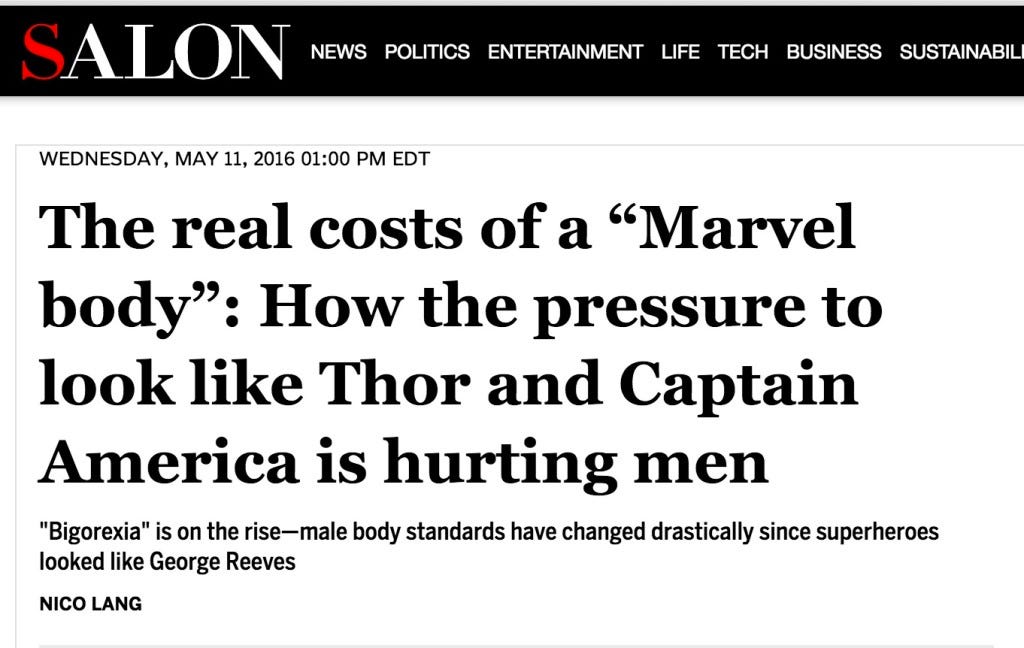 Slate – In a recent interview with BuzzFeed, Chris Hemsworth’s stunt double, Bobby Holland Hanton, told the outlet that he has to eat 35 times a day to “anywhere near [Hemsworth’s] size.” Henton, who claims that he also worked out twice a day to stay in superhero shape, previously told Muscle and Fitness that his high protein diet (which consisted of turkey, chicken, nuts, eggs, and spinach) was a massive impediment to having a healthy social life.

There are several different Marvel-themed programs that will help men seeking maximum muscularity achieve their fitness goals, many of which are prohibitively expensive. If the USDA estimated in 2016 that the average adult male aged 19-50 spends around $69.80 every week on food, that’s based on the expectation that these men eat around three meals a day—with perhaps a snack in between. Hanton eats 10 times that amount, meaning that a fitness enthusiast hoping to keep pace with his diet would spend $698 a week to do so. That comes out to $36,000 a year. That’s not even adding in the costs of paid programs like CrossFit, which commonly set members back around $200 each month.

In addition to the cost, there are a number of dangers to the Marvel plan. The first is overexertion: As Time reported in February of last year, working out too much can actually be just as harmful for one’s health as working out too little. Researchers in Denmark found that “people who push their bodies too hard may essentially undo the benefit of exercise.”

Is this emphasis on getting big at all costs making us any happier? In 2015, a BBC report noted that “bigorexia” (more accurately known as “muscle dysphoria”) is on the rise in young men. Rob Willson, who serves as the president of the Body Dysmorphic Disorder Foundation, told the BBC: “We know about 10 percent of men in the gym may have muscle dysmorphia.” Dr. Michele Kerulis of Adler School of Professional Psychology told The Daily Mail that rate may be even higher: She claimed as many as 45 percent of frequent male gym goers male suffer from disordered body image.

I saw this Salon article pop up on my Twitter feed a couple times today with women in particular RTing it with a “Oh yeah male body image is SOOOOO important” attitude. And while I fully get how that might be the obvious response, it’s not necessarily the most fair one. I mean I’m not supporting all of us shaking our fists angrily at their taut superhero abs because I ate Quesalupas for the third time in a week last night (this is a real event that occurred in my life) but it is a thing where you should probably think of the children. It’s really not that different than all the things women have said about how certain representations of their bodies puts pressure on them growing up. There are kids and dumb people who see this stuff and take it literally, thinking that in order to be their ideal they need to look like a dude whom it’s next to impossible to look like. Does that mean we need to have fat superheroes running around like we have plus size SI Swimsuit models or whatever to even things out? Probably not. But do these guys spending tens of thousands of dollars on food or surgery suffering from body dysmorphia have as much of a right to complain about superheroes as feminist chicks have to complain about all the similar shit they do? In my mind, absolutely.

At the same time though, how sick would it be to be built like Chris Hemsworth (like with none of the hard work involved)? I’ve read that guys on dating apps match around 100x more with a quality shirtless photo even though women act like it’s such a douche thing to do so I imagine some sort of Chris Hemsworth caliber photo would be a buffet of Super Likes and impromptu tit pics. Almost enough to make me not go for that fourth round of Quesalupas tonight. ALMOST.