Telegraph – An angry farmer attempted to spray Oscar-winning actress Emma Thompson with manure on Wednesday after she broke a court injunction to stage a protest against fracking on his land.

Ms Thompson and her sister Sophie entered a field on the Lancashire farm, where energy company Cuadrilla is planning to frack for shale gas, and baked renewable energy-themed cakes in a Greenpeace-backed protest stunt.

An injunction has been in place banning protesters from the land near Preston since 2014.

What do you do when some protesters break a court ordered injunction to protest on your land? Spray them in the face with literal shit.

I guess it was Emma Thompson leading the charge here, who you may instantly recognize from Love Actually (or was that just me?) 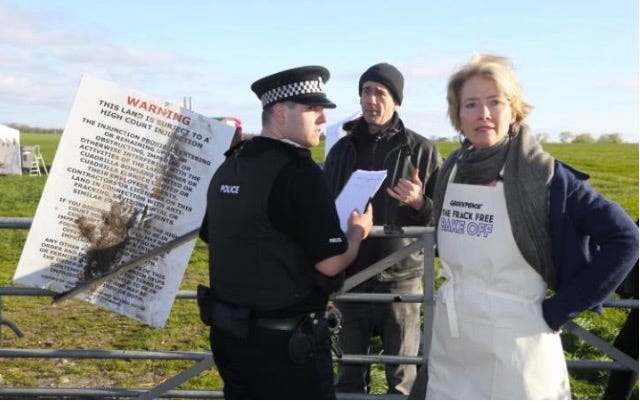 Emma Thompson said she was staging the so-called “Frack Free Bake Off” in order to “show the government that we will not allow fracking to scar our countryside and fuel yet more climate change”.

“What better way to do that, here in Britain, than hold a Bake Off?,” she asked.

…The farmer, who was said to be “very upset” about being prevented from getting on with work in the field, proceeded to drive a muck-spreader around the protesters, narrowly missing the Thompson sisters and their cakes.

Fuck your Bake Off!