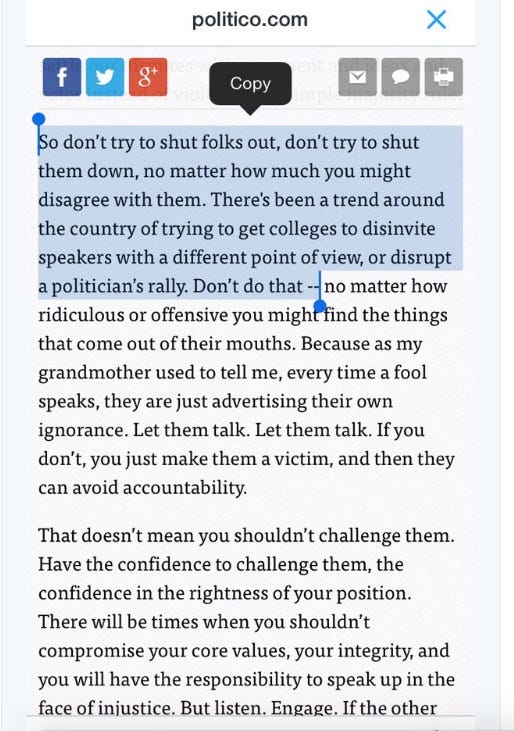 The Hill – President Obama on Saturday decried campus protests designed to shut down speakers that the protesters disagree with, calling instead for thoughtful discussion and fair debate.

“There’s been a trend around the country of trying to get colleges to disinvite speakers with a different point of view or disrupt a political rally,” Obama said at his commencement addresses at Howard University.

“Don’t do that, no matter how ridiculous or offensive you might find the things that come out of their mouths,” the president said. “Because as my grandmother used to tell me, every time a fool speaks, they are just advertising their own ignorance. Let them talk.

“Listen, engage, if the other side has a point, learn from them. If they’re wrong, rebut them, teach them, beat them on the battlefield of ideas.”

Say what you want about Obama, but don’t ever say the guy is afraid to drop bombs – whether it be real ones from drones, or Truth ones on serial college protestors and their safe spaces every chance he gets.

One of my favorite speeches of his Presidency was last year right in the middle of the protest explosion, telling college kids they don’t need to be “coddled”:

Nobody debates anything anymore, or listens to the opinions of others then responds with a rebuttal. They do this:

It’s the equivalent of a little child putting their fingers in their ears on the playground and saying nah nah nah nah I can’t hear you. If an opinion or comment doesn’t fit in with your line of thinking it’s just completely blocked out of the Safe Space. And if it somehow sneaks it’s way under the radar and into Safe Space Airspace, counseling is needed and demands are issued for people to be fired.

It’s annoying. It annoys me. If you couldn’t tell.