NBC 12 - A Chesterfield woman is preparing to celebrate her 100th birthday Saturday in an unusual way. “Some asked her what she wanted to do for her 100th birthday, and she said ‘a pole dance.’ And she no sooner said, ‘I don’t know why I said that.’ And the rest of us said we don’t know why you said that either, we didn’t even know you knew about pole dancing mom,” said daughter Carol Lensch. Ingerling, a mother of three children, many grandchildren, great-grandchildren and even great-great-grandchildren, is often referred to as Grandy and even Queen Bee. She lives up to that name, doing everything a Queen should. “I go to the beauty parlor every week and have my hair done. And then during the week someone does it for me.”

Ingerling thanks Oil Of Olay and wine to keeping her young and full of life. “How much wine? Now, only a glass a day…it used to be two glasses,” said Ingerling.

Queen Bee’s birthday party will be held in Chesterfield with family and friends Saturday. The family guarantees to making sure her birthday wish comes true. “We have worked it out that we are going to set up a pole for her. And she is going to do a pole dance. Very tasteful dressed. Not in the leopard print leotard that she once suggested, but she will stand up by the pole because that was her dream.” 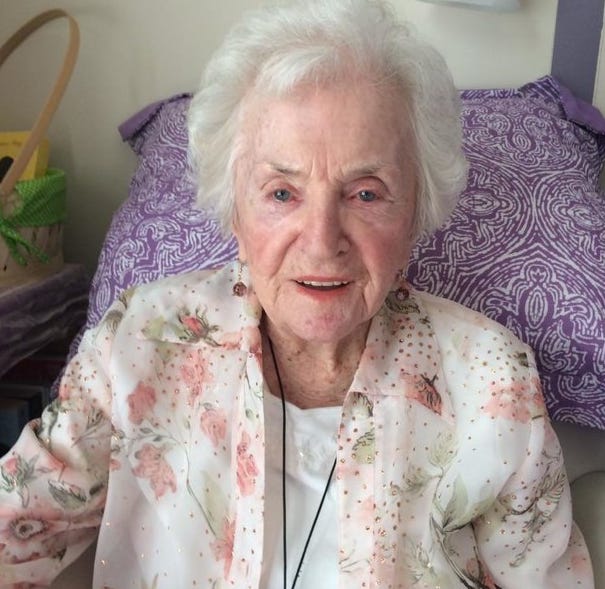 Oh man! What a shot in the arm I needed. Here I was, a bit down in the dumps, feeling like George Michael in Arrested Development, and this was a shot of heroin to the vein. I’m back baby! I’m back! My only question is how do I get invited to this birthday party???? You can’t tell me this hot piece of ace is going to be pole dancing and then not shoot me an e-vite at the bear minimum. Queen Bee up on that stage, shaking her tailfeather like its 1899. The fact her family isn’t letting her wear the leopard print leotard is a travesty. Let the Queen Bee eat! If she wants to wear leopard print who is her granddaughter to say no? Fucking millennials these days, I’ll tell you what. This woman lived through 2 World Wars, if she wants to get her bump n grind on, let her get her bump n grind on. Few glasses of Cab Sav and it’s off to the races. And I hope they film it, you know, for science purposes. It’s not every day a 100 year old hops up on that stage, let’s make sure to get it documented for prosperity and definitely not for my own personal use later. Happy birthday Beatrice, or should I say Baetrice, you minxy minx you.