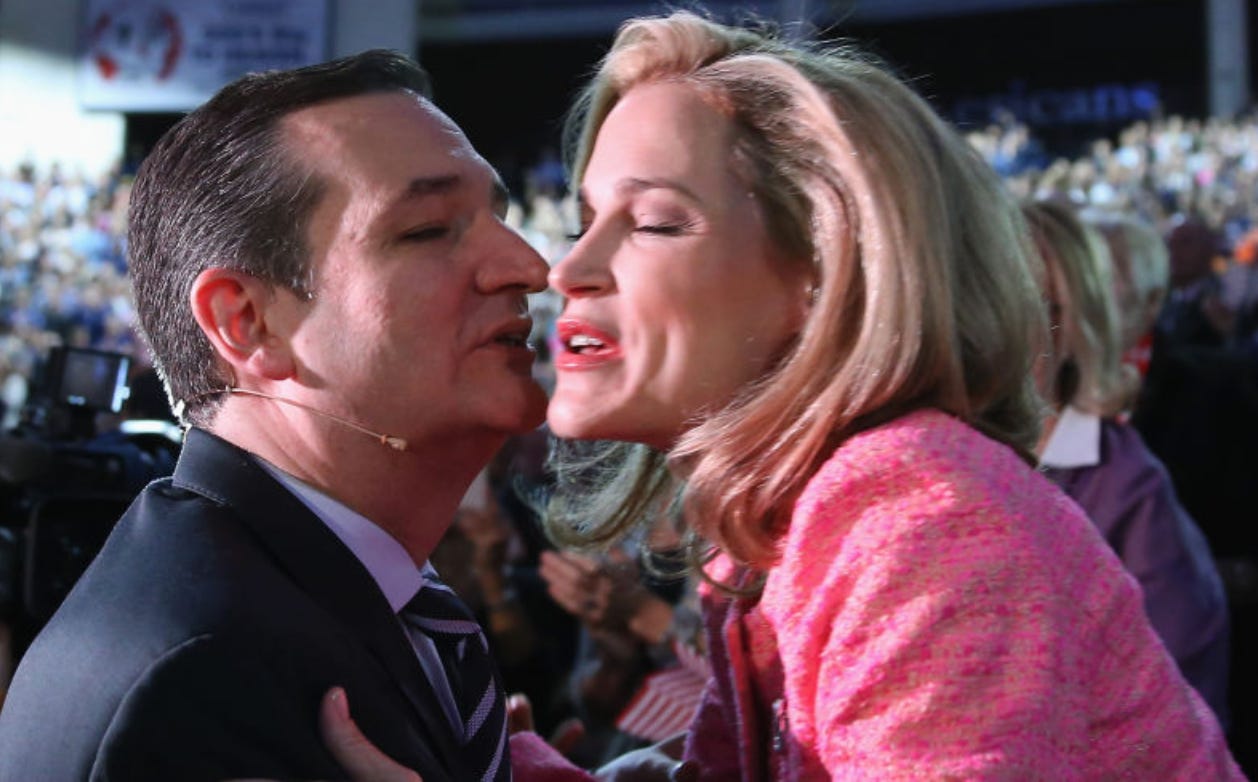 TT- Drawing a parallel between the long-term efforts of her husband’s supporters and the fight to end slavery, Heidi Cruz said Tuesday that it took “a lot longer than four years” for the latter fight to be successful. On a conference call with the campaign’s National Prayer Team, Heidi Cruz portrayed Ted Cruz’s presidential campaign, which ended a week ago, as one part of a broader journey similar to the abolition of slavery. “I don’t want you to feel like any of this was in vain,” Heidi Cruz said. “I believe in the power of prayer. This doesn’t always happen on the timing of man, and God does not work in four-year segments.”

I don’t wanna pile on Heidi Cruz too much here. She has a pretty rough life as it is. Her husband just lost a presidential nominee race to Donald fucking Trump. The last few months of her life were spent traveling around the country, campaigning non-stop and it ultimately ended in failure. Not to mention she has to have repressed Christian sex with Ted Cruz on a somewhat normal basis which can’t be great (or maybe it is. Teddy might have a hammer). Ya know, when he isn’t having that two pump sex with one of his five mistresses. But this is the internet and there are rules. Three rules, really. Rules you can’t break otherwise you will feel the wrath of said internet.

1. Don’t throw a black face party in college with all your white friends

2. Don’t make rape jokes unless you’re willing to go on Inside Edition and defend it

3. Never compare anything to slavery

That’s it. Follow those rules and you should be mostly okay. Heidi broke rule #3. To be honest, she couldn’t have broke this rule at a better time as weird as that sounds. This will most likely go pretty unnoticed because a) her and her husband are no longer relevant to the media now that Ted has dropped out and b) give it like 3 hours and I bet Trump will tweet out a picture of himself in his office eating fried chicken with the caption “I love African Americans!” So she should be okay here.

“Be full of faith and so full of joy that this team was chosen to fight a long battle,” she continued. “Think that slavery — it took 25 years to defeat slavery. That is a lot longer than four years.”

So was she just using it as an example of time? And her first thought was slavery? She is correct on one thing. 25 years is definitely longer than 4 years. Fact.