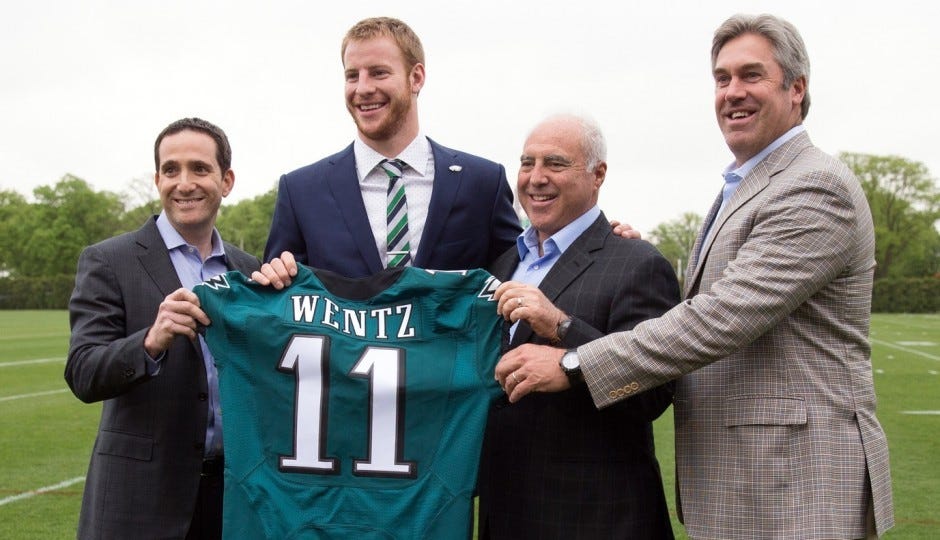 Fantastic news right here! Doug Pederson sees a lot of himself in Carson Wentz? By golly gee fucking wiz, isn’t that just the greatest thing ever. Maybe if we’re lucky enough our #2 overall pick can be a journeyman backup QB in the NFL, too! Now I know this is probably taken out of context. Doug Pederson isn’t THAT stupid to state Carson Wentz reminds him of a shitty NFL QB. I get he most likely meant his mentality and work ethic or some BS compliment that you can’t analyze. But when you’ve proven exactly DICK in the NFL via your playing and coaching days, maybe it isn’t the best idea to compare anyone to yourself in a positive light. Just a tip.

And here we have Carson Wentz’s first fan pump up video as an Eagle. I guess when you take the worst clips and quotes from the Eagles disastrous 2015 season and insert Ginger Jesus ripping apart that 1-AA talent, it’ll look good every time. Again, I’m rooting for the damn kid and I hope he has what it takes, but he’s proven absolutely nothing yet.