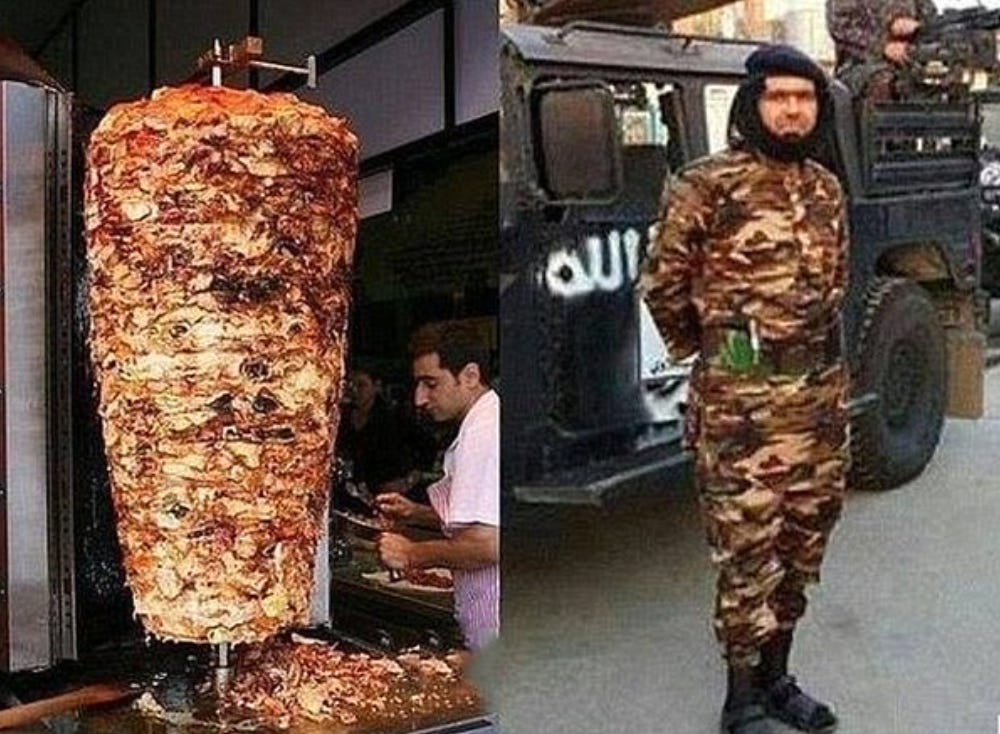 Daily Mail- A top ISIS leader in Iraq who won online fame after being likened to a doner kebab, has been killed alongside three other jihadis in a US-led coalition air strike. The Pentagon confirmed the death of ISIS commander Abu Wahib near the town of Rutba, in the Anbar desert on Monday. The rotund 29-year-old was mocked on social media after images showing him wearing unusually coloured camouflage next to doner meat on a stick emerged on Twitter. The weekend’s strike was targeting Wahib and spokesman Peter Cook said Wahib was ‘a former member of Al-Qaeda in Iraq who has appeared in ISIL execution videos’. ‘We view him as a significant leader in ISIL leadership overall, not just in Anbar Province,’ he added. ‘Removing him from the battlefield will be a significant step forward.’

Yes! Quick terrorist update here. Remember the dude who got roasted by the interwebs for looking exactly like a pile of meat? Well he’s a dead person now. Dead and gone forever. It might not be the end of ISIS but it’s like Avon Barksdale once said. That’s one less mother fucker that’s breathing than was yesterday so we all good. This is really all you can ask for in terms of the career of an ISIS leader from our perspective. First we got to mock him for looking a piece of meat and then he gets his bitch ass blown up during US-led air strike. Fantastic. I’m sure he will lauded as a deity and a martyr in his part of the world but around here? His legacy will forever and always be the dude who looked like a kebab then got himself deaded by a missile courtesy of the U S of A. I hope those were his dying thoughts. Not that he was a terrorist leader. Not about his wife and kids. I hope he was thinking to himself, “Aw fuck. Now there’s gonna be American headlines about the guy who looked like a meat kebab.” See ya sucka.