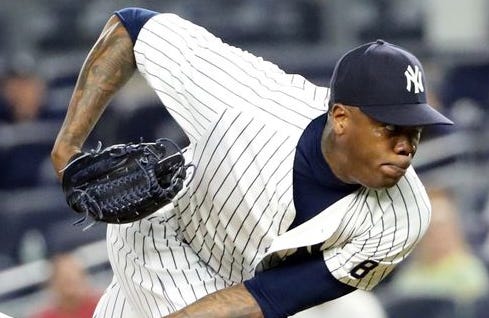 It was a big Monday night in The Bronx as the Yankees hit five solo home runs and got 4.2 inning of 1 run ball out of Ivan Nova to beat the defending World Series Champion Royals 6-3. After having no offense for most of the season, the Yankees have shown in the last week that there’s still life in their bats. McCann kicked things off with a solo shot in the first to set the tone with Beltran going deep twice and Gardner and Hick giving the Yankees their first back to back home runs of the year.

I said yesterday that ever though the Royals came into town as a .500 team, these are games the Yankees need to win. If you’re a good team you find a way to win this series and starting off with a win during a spot start from Nova puts us in a great position to do so. With our ace on the mound tonight, we can get the first 2 games under our belt to be only 1 game away from a series win. Obviously a 4 game sweep is the ideal situation but for the Yankees to get back into this thing, the focus need to be on winning series. This will be Tanaka’s first career start against the Royals so the hope is that he can have some of the success that he had very early in his career due to the lack of familiarity.

The other story last night was the debut of Aroldis Chapman. Chapman just wrapped up a 30 game suspension for a domestic violence violation that delayed him starting the season on time. Even though the game was well in hand, Girardi used him because he is in the walk year of his contract so there is no reason to let him sit in the bullpen. On top of that, if the Yankees don’t jump back into contention, Chapman will likely be a trade piece at the deadline. Chapman’s started things off by hitting 100 mph on the radar gun and topping out at 101 during a 17-pitch outing. It seems as if some of the excitement of making his debut got to him though as he did allow a run while striking out two.

Chapman himself doesn’t turn this season around but his presence and his fastball add an excitement to the team and bring an energy to the ballpark that we’ve been missing. Chapman may not be able to drive in runs, but if his presence motivates the fans to motivate the lineup, I’ll take it.