Jared was nice enough to showcase Manny with his wakeup blog yesterday, but it’s time you hear it from the your boy. Manny Machado is arguably the best player in baseball today. That isn’t a hot take or anything, it’s the truth. Ask anyone with a brain and a set of eyes, and they will tell you the same exact thing. You don’t realize what a special player he is until you get to watch him play every single day. He’s so young, and so good, it’s scary to think what the next step is for him. Before the conversation was all Trout and Harper, we have to include Manny in this conversation, because there is a good chance he belongs at the top of that list.

I’d be okay with someone saying Bryce Harper is better, I can swallow that pill. But I think the conversation is a lot closer than people think. Especially with teams now pitching around Harper and taking the bat out of his hand, you can do that against the Nats and guys like Ryan Zimmerman or Daniel Murphy. If you pitch around Manny you get to face Adam Jones, Chris Davis, and Mark Trumbo, not very smart. Harper obviously has all the talent in the world, and then some, but I believe Manny edges him with the glove, Bryce is about equal, maybe a little scarier with the bat.

I’m not saying Mike Trout isn’t great either, because he is. But if you give me a choice between Trout or Machado, I’m taking Machado. We’ve seen what Trout can do, the highlight catches, the visits to #DongCity, AL MVP, All Star Game MVP, but his game does have flaws. He covers ground as well as I’ve ever seen, but his throwing arm isn’t that great, and he strikes out a ton. He’s an absolute stud, don’t get me wrong, but right now, Manny is a better player than Mike Trout. If we’re being honest, Trout playing on the west coast on a crappy team doesn’t help him either. 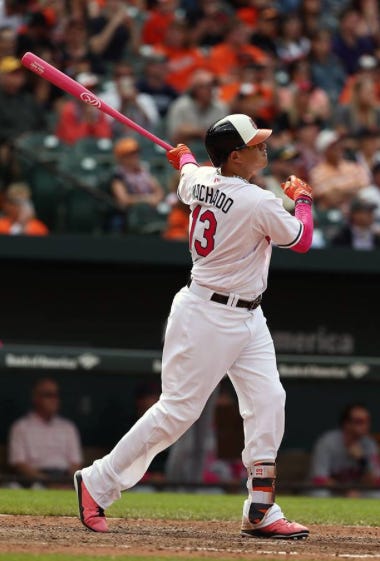 The only knock against Manny is what, the genetic issue in his knees? We all know the injuries he suffered, I’ve replayed them over and over again. But he’s proved that he is healthy by playing all 162 last year, and all 30 this season. That’s right, Manny Machado has the longest active game streak in the MLB, only 2,440 behind Cal’s.

But seriously, what can’t Manny do? His throwing arm is the absolute best in the game, as is his glove (Arenado is second). We’ve seen the plays at third that won him a Platinum Glove, and now due to the injury to J.J. Hardy at short, he’s making some great plays there. The best third baseman in the league is now the best shortstop in the league. He can make every play from the hot corner, deep in the hole, barehanded in front of the mound, there rarely is a ball he can’t grab, or a throw he can’t make. Literally, he flicks his wrist from foul ground, and the ball is on a frozen rope to Davis.

As you can see in the chart at the top, Manny, Bryce, and Trout are pretty close in the categories. Manny leads in runs, hits, doubles, least amount of strikeouts, XBHs, average, slugging, OPS, and WAR. Harper leads in HR, RBI, BB, stolen bases, and OBP. Trout leads in triples. It’s insane to think that there are 3 guys with this amount of talent, all could be once in a generation players for their franchises, and we have them all playing baseball, entering their primes at the same time. Get him signed now Peter, empty the checkbook.

Tweet me your argument for who the best player is in baseball right now. I swear to god I’m blocking any moron who says Ortiz. 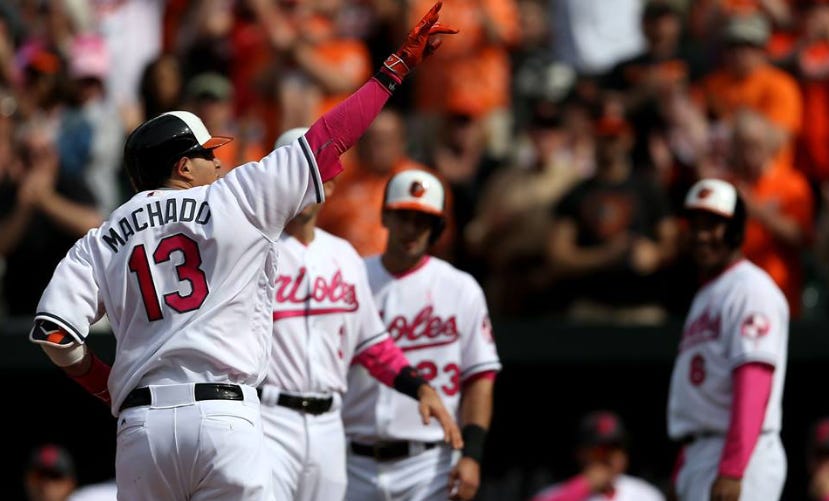