The first Saturday in May is becoming a holiday for people who love niche sports. Hockey, Horse Racing, and it seems like there is always a big fight in Boxing too. I was very excited for the Canelo-Khan fight, but I think I was the only one. Even among boxing fans on twitter it seemed nobody really bought into the fight because they perceived Khan as being a little British wimp with a glass jaw. Which is true to a certain extent. But that’s exactly why it was a great fight. Khan was ALWAYS in danger of being knocked the fuck out. Watching Khan was like watching that idiot tight rope walker Wallenda go across the Grand Canyon.

The only difference being Khan actually slipped and plummeted to his death. Everytime Khan went on the offensive and exposed himself I would wince and squirm in my seat waiting for Canelo to counter. And then Canelo did what we were all waiting for and it was spectacular. The fight was over and Khan was crying Jordan’d before he regained consciousness. 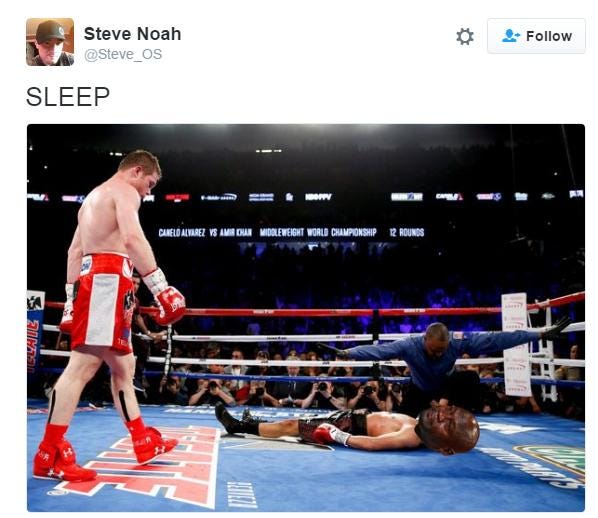 It was great theater. For whatever reason, MMA doesn’t capture me the way boxing does and it’s probably because they can’t quite duplicate what happened on Saturday night(I’m not an MMA guy, but they do a much better job of promoting and they probably a deliver a good fight more consistently than boxing. This is not an anti-MMA blog so pipe down). You couldn’t ask for much more from a Canelo-Khan fight. Khan showed his speed and took a couple rounds early. Canelo settled in and out-boxed Khan in rounds 3-6. Then delivered the knockout we all came to see. Except, the majority of the country didn’t see it. Nobody seemed to care. Even Khan, after he regained consciousness, was like “I don’t know why Canelo won’t just fight Golovkin. I’m going back down a weight class”. I’m certainly not a boxing expert or historian, but I can’t remember another time when a fighter who just got put to sleep, woke up and said yeah the guy that just short-circuited my brain should really be fighting someone else. Khan has the excuse of not having a fully functioning brain, but his trainer doubled down on that thought. That’s how much everyone in the boxing world wants. Canelo vs Genady Golovkin. So just give it to us. Don’t “fuck around” as Canelo said immediately after the fight. But then…they immediately started fucking around.

“We’ll go with an offer and see if the fight can get made. I have a team, obviously, but for me there’s no issue. I’ll fight him at 160. Now, we’ll sit down as a team and discuss it.”–Canelo Alvarez

Canelo sounds like a guy who is already breaking plans. “I have a team” is basically “Yeah man, I’m down. Just let me run it by my wife….ah sorry she says we have plans”. The Canelo-GGG fight NEEDS to happen. It’s the only fight that matters. We just went through an era where we had to wait a decade for Mayweather-Pacquiao. Then when it finally happened, it was a dud like every other Mayweather fight. Canelo-Golovkin would be the EXACT opposite. Styles make fights, as they say. Floyd’s style was boring. Canelo and GGG would be ELECTRIC. It’s two guys that basically want to stand in the middle of the ring. Golovkin wants you to stand there so he can go to work on your face, Canelo wants you to come right at him so he can counter and put you in the twilight zone. It’s the perfect matchup. It will be fantastic. The type of fight that if Dana White was promoting it would save boxing. That’s why, if Golden Boy Promotions and Oscar De La Hoya doesn’t give us this fight inside of 12 months then I am done with boxing. A man can only be pushed so far until he starts making empty threats. That’s where I am right now. Boxing has a chance to deliver a fight between the two best pound for pound fighters on the planet and if they don’t give make it happen then they don’t deserve another dollar out of my wallet. To borrow a phrase from Dan, I will be #Done with boxing if we don’t get this fight by the first Saturday in May next year. #Done. We need some scandalous pictures to extort De La Hoya and make this fight a reality.

Here are some GGG highlights to get your blood pumping.