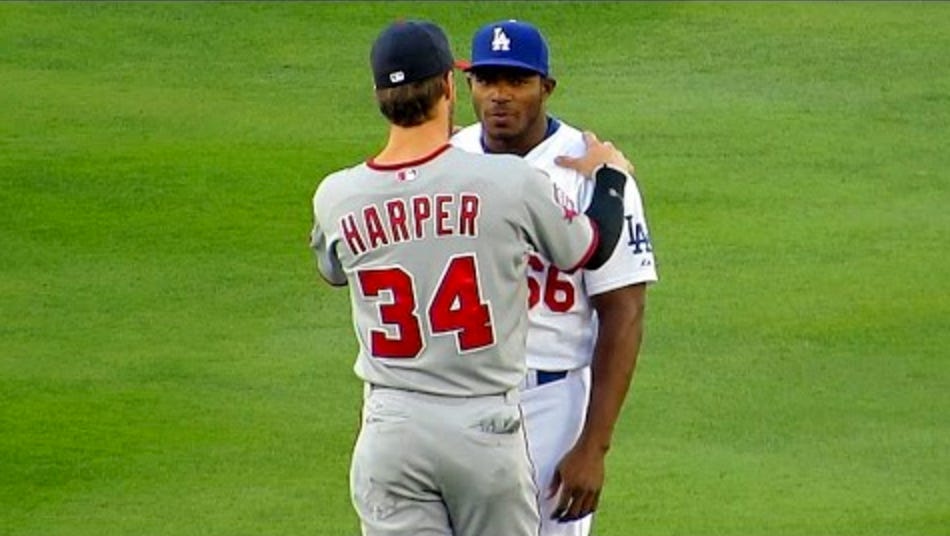 By now, you’ve probably seen the “Make Baseball Fun Again” hats (that Barstool gave to the Nationals for free, under the impression that they were going to the players, only to find out that the Nationals were selling them at full price).

The whole “Make Baseball Fun Again” thing sort of came about after the Jose Bautista bat-flip in last year’s playoffs, but Bryce Harper has taken it upon himself to be the spokesman for the movement. I’m all for it. Part of the reason why there’s a “baseball is boring” crowd, aside from how long the games are, is because of the lame ass “unwritten rules” of the game. Baseball’s supposed to be fun. You shouldn’t have to contain your excitement when you’re excited while playing a professional sport. That’s just stupid.

Yasiel Puig burst onto the scene and took the baseball world by storm in 2013. A boatload of talent (no pun intended), high energy, and exuberance is what Puig brought to the table right from the start. He did the whole bat-flip thing, and he wore his emotions on his sleeve. Then, pitchers (cough, Madison Bumgarner, cough) started to throw at him for his theatrics, the same way that pitchers (cough, Cole Hamels, cough) threw at Harper for his when he first came into the league.

It got to the point where, last year, Puig said that he was going to cut back on flipping his bat, and prove that he respects the game of baseball more. Fuck that. Yawn. It seems that Puig now shares a similar sentiment, as he called Harper his idol, and plans to join the “Make Baseball Fun Again” movement.

Bryce Harper is my idol now. I’m going to join him in the “make baseball fun again” campaign; I’m just waiting to get my shirts and baseball caps. He’s always been a great friend and a great athlete, and I admire him. I like how he plays the game, and I think he gets it. It’s good to see an American player saying that there needs to be a little more fun in baseball. Fans leave everything behind to come and see us play. We have to make baseball fun for the fans and not take everything so personal.

It’s not about Harper or Puig making noise about it. In baseball, it is more common for a pitcher to punch you out three times than for you to hit the ball out of the park. So after you have struck out three times against a pitcher and you finally get a home run, bat flips are just an emotional expression — not about taunting the pitcher. That’s what Jose Bautista did [in Game 5 of last year’s ALDS]; he changed the result of that game with that swing. It was a big thrill for him, and he flipped the bat. He has always been a respectful player and only flipped his bat when he was overcome by emotion. Afterward, he was criticized as if what he did was wrong. But he had fun!

I think Puig nails it here. It’s not about showing up the pitcher or showing any disrespect. If the moment calls for it, you shouldn’t have to apologize for showing emotion, nor should you have to contain yourself in that moment. Make baseball fun again.