What a fucking douche! That Bryce Harper I tell you what, so immature. The fact he does his hair and likes to watch his home runs, he really needs a big time life lesson. SMDH.

Did he Snapchat the above? Nope. Did he put it on Instagram? Nope. Just felt like doing something nice, did it, and got back onto the bus. That’s kinda how he lives his life. I feel like little by little people are realizing Bryce is quite literally everything you want in a baseball player. He’s electric, he’s great with the media, great with the fans, gives back to the community, and really just wants to have fun. But he doesn’t do it in the JJ Watt way of making everything about “look at me, I’m doing this because I want people to see me do this”. JJ would have taken a selfie with the homeless man, Bryce just does cool and nice things because he likes doing cool and nice things. It might be the Mormon in him, I don’t know, but it’s pretty sweet.

Or when he signed the ball for that girl who asked him to prom.

Or when he took a selfie on someone’s phone during BP.

Or when he hit a HR using the most American bat possible. 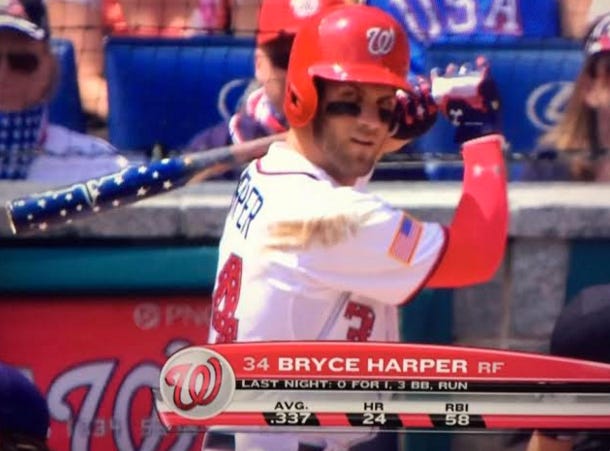 But he gets excited when he hits a HR, kick him out of the league!

PS: You know how you know you’re the best? When you’re in the biggest slump of your career, hitting .265 for the season, and still get walked 6 times in one game. He might not get an official at bat for the rest of the season.

All he could do is stand there and laugh as he reached base for the 7th time in the game without an official at bat.