Americans are sluts for horses. Seems every year there’s another special one that everyone’s paying attention to just because it can run faster than its neighbors and teammates. This year that horse du jour is Nyquist, who won the Kentucky Derby on Saturday and is now being held up as a role model and American hero just because he’s literaly a one-trick pony who epitomizes a nation that prioritizes job done quick over a job done well. There are literally thousands of articles written about Nyquist today, yet its telling that I can’t find a single one published about any of our nation’s police horses who do a much more difficult job for a fraction of the pay. Sad state of affairs when we throw laurels at these rich athlete horses who father countless children all with different mothers , instead of giving more recognition to all the brave horses in law enforcement.

It starts with our celebrity focus culture where movie stars, musicians, and millionaire blog owners are buying and idolizing race horses, but can’t be bothered to buy a carrot and a salt lick for a horse that could one day save their lives. Something wrong with our priorties as a country when we go out of our way to wear the biggest hats we can find for our equine athletes, but can’t be bothered to take them off in respect when a police horse walks by folks.

Until there’s a culture change in America that emphasizes respect for law enforcement over athletes, we can’t expect our nation to regain its moral that made it once great. Now we live in a society where this type of behavior is celebrated. Just look at the indoctrinaton occurring on college campuses nationwide:

And how do we reward these students for abusing Law Enforcement Animals? Simple, we give them jobs in the NFL:

Heck, even the horses who win get forgotten about remarkably quickly. The only exception is Barbaro, which tells us that the only way to achieve horse immortalty is ironically to die on the track. There were movies and TV shows made about Barbaro, yet we don’t hear a peep in the media about the dozens of police horses that pass away each year due to old age. Todays athletes could learn alot from the 9-5 dependability they show. Nothing flashy, just showing up every day and clocking in for work. Milleneal horses need a mane of roses and a pat on the back just for doing their job, but when a police horse chases down a bad guy or poops on a passed out drug-user they don’t get a metal because they don’t need one for doing their job. Its called honor- something Nyquist wouldn’t know if it bit him on the tail.

But as long as we continue to treat race-horses like celebrities instead of honoring the ones out there doing actual work, we will continue to see the type of selfish behavior from our modern-day athletes who just want to get paid and get laid instead of serving, protecting, and keeping the peace- thats the real triple crown. Until then, we’re going to remain on the wrong track. 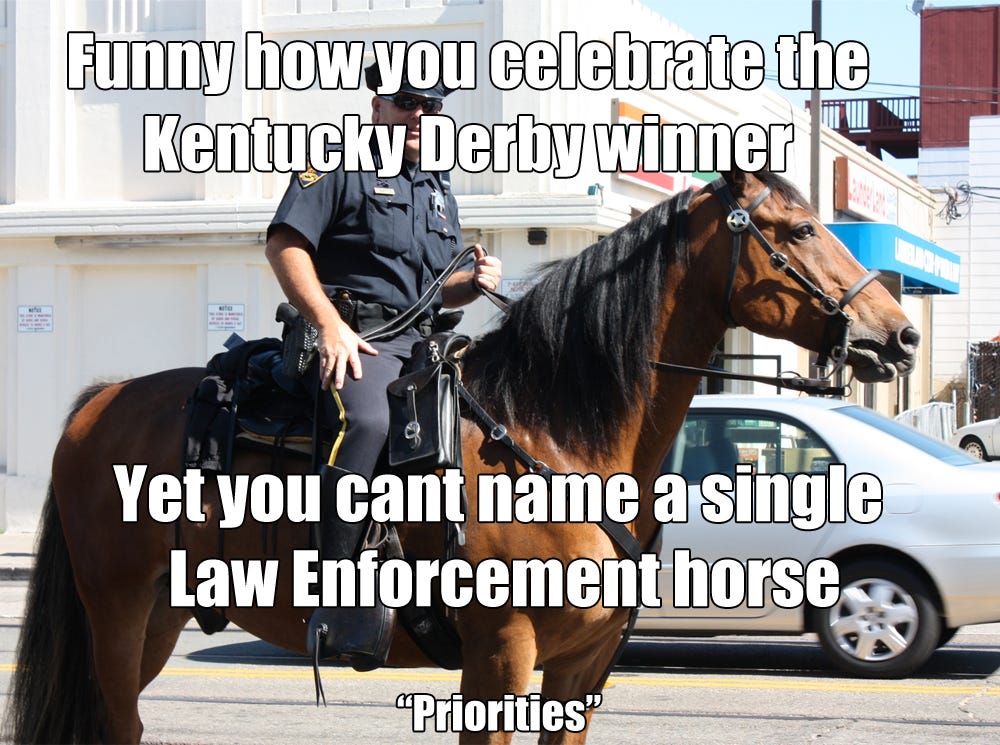 Ben has lost alot of weight this offseason, and it truly shows in how nimble he’s become. Move over Cam Newton because Rothlisberger is the epitome of the next generation of mobile QBs.

1. Bruce Arians continues to innovate. He stopped by a local news show to demonstrate how to cook a perfect ribeye and gave one of the best takes I’ve ever heard on food preparation. He says that you should cook your steak for exactly as long as it takes you to finish one cocktail. So if you can pull down 3 finger’s of bulleit in two minutes then your probably man enough to eat a extremely rare steak. On the other hand, if your taking 10 minutes to drink a cosmo, you probably were going to order your steak well done anyways.

2. Mike Florio of ProFootball Talk is making some noise about bringing the draft lottery back, but I think we’re focussing on the wrong issue here. As Keenan Reynolds is attempting to make the Ravens and slip out the back door instead of honoring his commitment to his country to serve in the miltary after graduation, its made me think about how we should re-tool the draft as well to amek it more military-friendly. At the start of every round, the Army, Navy, Air Force, and Coast Guard should all get the first four picks. There was a time when our nations best and brightest atheletes would flock to the military and that’s what we need again. If Laremy Tunsil wants to strap on a gas mask , I say we should let him.

3. The Gettysburg Museum is opening up and for only $7 you can take a look at Abraham Lincolns last BM:

I don’t know whose Idea it was to rush to the toilet as Lincoln died and fish out his log but thats a whole new level of fame we should all aspire to.

4. Buffalo Bills UDFA LB Eric Striker really screwed up his first press conference in Buffalo, where he went out of his way to talk trash about Buffalo wings.

“And then, I guess the Buffalo wings? But in my mind, I’ve tasted a great chicken wing. How much better can it be here?”

The media contingent at his podium collectively gasped in horror with one saying, “Watch it!”

“I don’t know!” Striker continued. “I feel like I’ve had some great chicken wings. I mean, what else can you do to a chicken wing?”

This is literally like the only thing you can’t say on your first day in Buffalo. The reporter’s begging him to stop like he was Tin Cup swinging for the green over and over again should of been a good clue that he was going down a bad road. This is a learning experence but something tells me that a guy who can put his foot in his mouth so easily is going to have a place on a Rex Ryan roster.

5. ESPN has just let Chris Carter go, who aparently didn’t have a fall guy at the ready for his on-air inadequacies. I’m actually a big Chris Carter guy mostly because he was always half a second from dropping a hard F-bomb or literally crying. He was a real wildcard and I’m going to miss that. They also got rid of Ray Lewis but Bristol was quick to note that they werent’ cutting him they were just going to be obstructing his paycheck.

6. Sam Bradfords long half-assed holdout is over. I know alot of people in Philly are mad at him but the fact is I can gaurentee you that Bradford is not talented enough to lose an NFC championship game.

7. I watched a little bit of baseball over the weekend and while some are mad at Joe Madden’s decision to not pitch to Bryce Harper, I say the blame lies at the feet of the slugger himself. Bryce isn’t aloud to get bad at being walked when it’s his choice to not swing at those pitches. A intentional walk is just a pitcher grooving 75 mph meatballs that happen to be a bit outside. Still, if Harper wanted to he could swing. Nobody to blame but himself for his lack of production when he knows exactly where the pitch is going to be. Also you have to admire Madden/Theo’s ingenuty when it comes to playing moneyball. The more they can drive up there own player’s walk counts artificially, the less they’ll have to pay them in free agency. So smart.

And as a way of trying to get back into the medias good graces after a weekend where he had 0 plate appearances a/k/a he didn’t do his job, Bryce donated a bunch of money to a homeless woman who dosen’t even have a mortgage or rent to pay. Total waste of time and resources which he clearly did just for the cameras that I’m sure he was surprised weren’t around to catch him 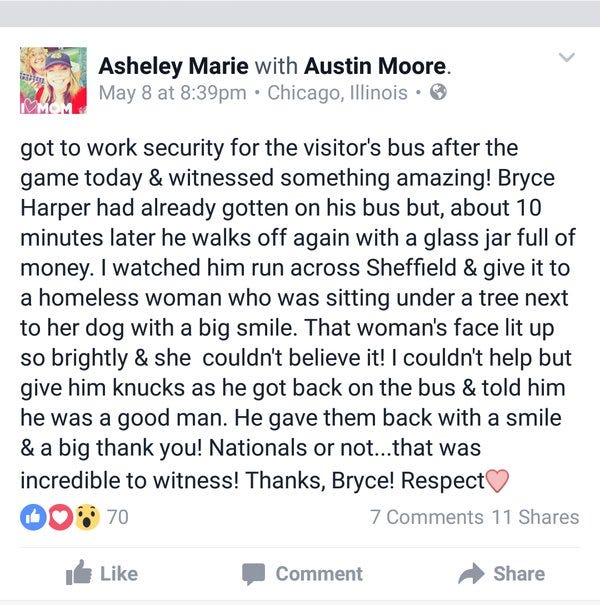 Great job Bryce. Giving rent money to someone who doesn’t even have a lease. Might as well donate a bunch of condoms to bloggers.

8. In NBA news everyones giving Dwayne Wade the business because he was dunking during the Canadian national anthem instead of standing for it. And while it did appear that he gave the entire nation of Canada bulletin board material which fueled the Raptors victory, I still stand by Dwaynes right to not give another flag the time of day. There’s a fine line between repsecting another counties anthem and committing treason, and I don’t know how we can police that without getting into thought crime. The trick to respecting another country as a American is that you have to respect it enough to not bomb it, while also not respecting it so much that you would ever consider living there. Always a tricky balance to strike.

Also- if an American dunking while the Canadian national anthem is being played isn’t already the official music video for “O Canada” it should be.

9. Joe Flaccos younger brother Mike is trying out at TE for the Ravens and his youngerer brother just won the DIII javelin national championship. Good day to be in the Flacco family, they’re the thinking man’s Gronkowskis who care more about catching TDs than STDs. Good news is that Mike has a masters degree in Chemical Engineering from Villanova so if this doesn’t pan out he can always go back to his old job of making steroids for there NCAA basketball team.

10. I have no idea whose going to take over on First Take with Stephen A Smith but I’m going to call him “Skip Payless.”

Well Cam for some reason thought it would be a good idea to hop on instantgram and do a awkward freestyle rap for the world. Folks, I haven’t seen a QB stumble in and out of bars like this since Johnny Manziel.

My dad got paid, for my recruitin,

I got some dough, there’s no disputin,

In so much bread, they call me gluten/

Great job Kanye, but I want a QB who cares more about titles than Tidals.

This weeks rating is: He should refund the fans 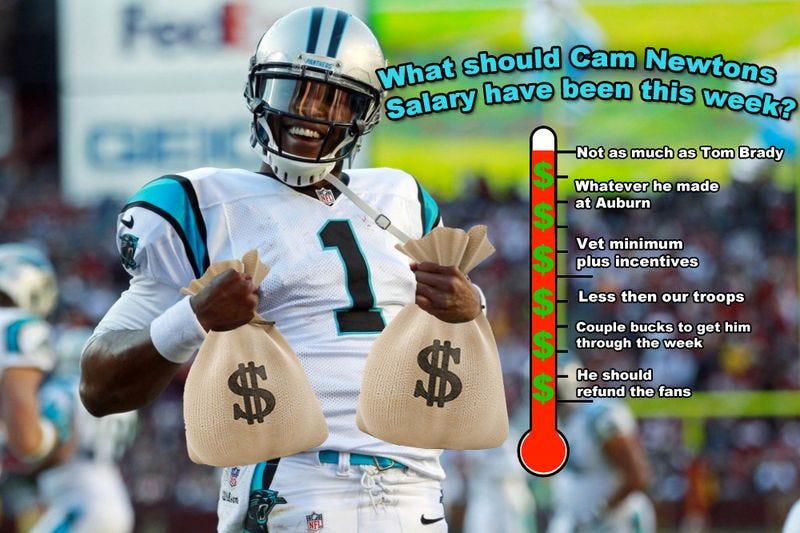 Also, hate to be the one who points this out, but I’m discouraged by the fact that Cam’s suppose to be a role model and yet he’s encouraging his fans to listen to rap music which has disturbing levels of swearing, drug use, and graphic sexual content. As MVP thats a bad look for the leagues online presence.

69 of the week: the official NBA twitter account made what looks to be a hilarious 69ing reference: 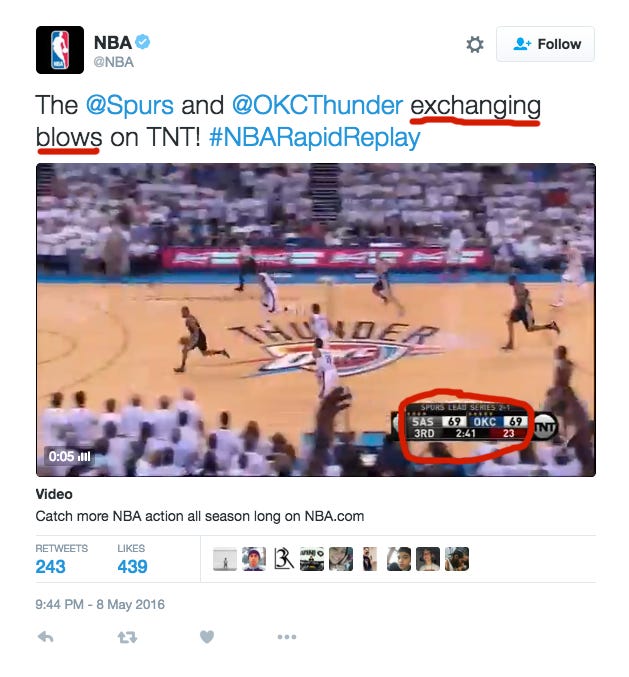