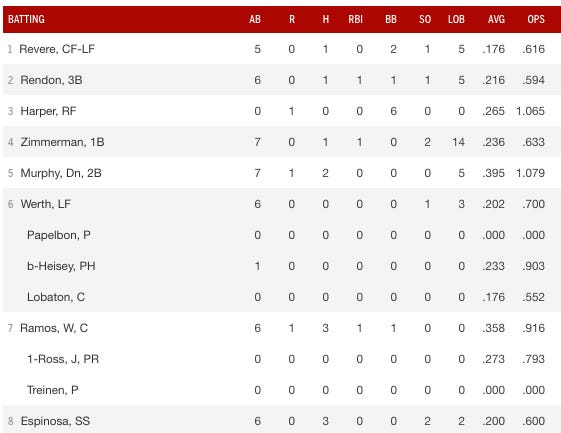 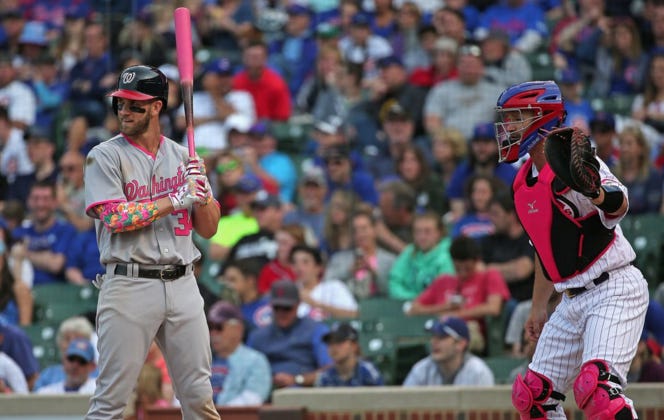 What a game for the Nats. Hit Jake Arrieta harder than any team did this season, but it didn’t matter. The Nats bullpen couldn’t hold the lead and the Cubs walked it off in extras. But the biggest storyline from today was the Bryce Harper story. No, not what he wore, that took a backseat to him having 7 trips to the plate, and recording 0 official at bats. 6 walks and 1 hit by pitch. The last 2 walks were intentional to load the bases. Fortunately for the Cubs Ryan Zimmerman is still for some reason batting behind Bryce instead of Daniel Murphy and his .395 average, and Zimmerman stranded 14 Nats today. 14!!!!! If Murphy and his .395 average isn’t hitting behind Bryce on the lineup card tomorrow we have to take Dusty to the Springfield Retirement Castle. We have no other choice. Ramos is raking too. But you can’t have every team walking Bryce to load the bases cause Zimm can’t hit worth shit right now.

Is it annoying that the Cubs wouldn’t pitch to Bryce all weekend? Of course. But what can you do? It’s the best strategy to win baseball games. It’s not “good for the game” if you will, but if I’m Joe Maddon I don’t really care what’s “good for the game” at this point either. They wouldn’t walk Bryce 6 times if the Nats had someone behind him who could hit, simple as that.

Biggest takeaways from this series- The Nats are good, the Cubs are very good, and the Nats could really use Trea Turner’s bat and speed right about now.