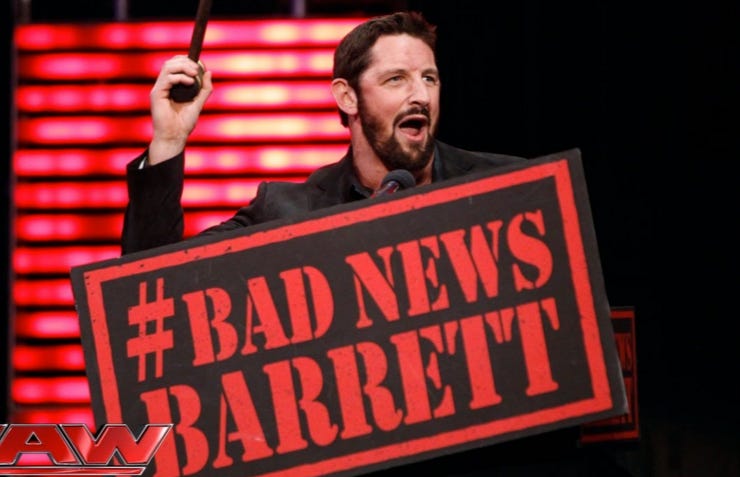 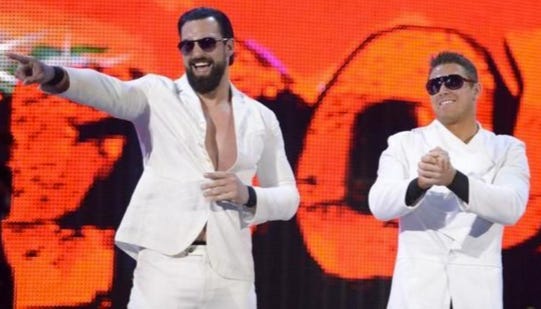 WWE - WWE has come to terms on the release of WWE Superstars Damien Sandow, King Barrett, Santino Marella, Cameron, Hornswoggle, Alex Riley, El Torito and Zeb Colter as of today, Friday, May 6, 2016. WWE wishes them the best in all of their future endeavors.

About every 6 months WWE has themselves a Black Friday when they release a bunch of people you didn’t realize they were still paying, and a couple people that make you wonder “what if?” That happened today when they released Wade Barrett and Damien Sandow.

Wade Barrett is awesome at his job. Great in the ring, great on the mic, even has that big build that Vince likes. His “Bad News Barrett” character got him very over as a heel, and it’s unfortunate that they took it away from him when he got injured. He never got back into the upper mid card where he belonged, and now WWE has released him. I’m a big heel guy so I always enjoyed his work, but it always seemed like he could have been a big name in this business if they let him. I hope he has another run in the WWE where he meets his full potential.

And then, Damien Sandow. A few years ago as Damien Mizdow he might have been the most popular guy on every show. Seriously. The way him and the Miz worked off one another to get Miz ultra heel heat and Mizdow huge face pops was completely wasted by WWE creative. Sandow was good at everything he did and had an uncanny ability to get over with the crowd, no matter what bullshit gimmick they put on him. He unfortunately was getting over with the crowd during a very heavy “my name is Vince McMahon and I decided who is popular, not the fans” so he was of course pulled from TV. If only Vince and co. allowed wrestlers who actually connect with the audience thrive, instead of pushing people nobody really cares about, like Reigns, Del Rio, Sheamus, etc. They keep getting these big pushes and put fans to sleep when guys who the crowd have an interest in get buried and then released.

Hopefully the tides are turning, for example with guys like AJ Styes main eventing, but I’m hesitant to think he’s the norm and not an outlier. But it was too late for Barrett and Sandow, but they will definitely catch on elsewhere or in the Indies, where they will continue to be great.

PS: Poor Hornswaggle and El Torito. They were actually pretty good at their jobs too. RIP WWE midget wrestling.