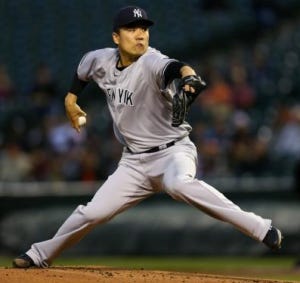 BALTIMORE – Could there have been a more fitting way to end this disastrous road trip for the Yankees than being shut out over 10 innings?

The Yankees praised Masahiro Tanaka for his eight brilliant innings, but they went for naught as the Orioles eked out a 1-0 win in the 10th, sending Joe Girardi and his team home with a 2-7 record on the road trip.

“It’s a tough road trip,” said Girardi, who was ejected in the fourth for arguing a non-call on a balk. “It’s really, really disappointing. But we start a long home stand and we’ve got to make up some ground.”

Despite seven-run outbursts in a losing effort Sunday night in Boston and in a win here Wednesday, the Yankees were held to two-or-fewer runs in six of nine games on the trip, including two shutouts and a pair of one-run efforts.

“It’s kind of been the story of the season,” Mark Teixeira said. “We haven’t hit, and it’s not rocket science. We just need to execute better.”

The losses this year suck. You don’t need some deep analysis to understand that, but what makes it worse is the way that this team is losing. It really feels like they find a new way to lose each and every time. One day our starter gets shelled and we don’t have a chance. The next day our starter pitches alright but we can’t score more than 2 runs. Then if we get our ace to give us 8 shutout innings we can’t get runners in scoring position and when we do, they get PICKED OFF BY THE CATCHER WITH 2 OUTS IN THE 9TH!!!

As a fan base we know the team hasn’t played well but when guys like Castro, who has been playing great, or Betances are the ones to cost us a game, the frustration boils over. Right now there is not one player on this roster that we can confidently say, if given the opportunity, will deliver for us. Actually, we can’t even trust that they won’t find a way to make matters worse.

As much blame as the player should and will take for last night’s loss, the coaching staff needs to fall on the sword here. Joe Girardi was tossed in the 4th inning but was still impacting the decision making from the clubhouse and decided to mismanage the bullpen worse than I’ve seen in quite some time. Dellin Betances came in for the 9th inning after pitching the night before and should have been left in the game to start the 10th. Girardi never lets a pitcher throw 3 days in a row, so if Betances wasn’t going to be available Friday, you use him in the 10th.

Now I’m not on the coaching staff, so I don’t know if more went into taking Betances out, but if he did in fact need to come out, why wasn’t Miller brought in? Miller says he was ready to start the 10th and with every game being a must win game, especially against a division opponent, you cannot leave that game in Barbato’s hands will Miller sitting on his thumb. I’m not calling for Girardi’s job yet, but this really doesn’t help his or his staff’s case.

With all that being said, it’s time to turn our attention to the homestand coming up. We have two first place teams and the World Series Champs coming to town starting tonight with the Red Sox and 5-0 Rick Porcello against the highly combustible Pineda. Last week I said that if the Yankees had a road trip as bad as they ended up having, the season could be over. With the pitching the last two days and a few other games, I’m not really to bury them yet but if things don’t turn around and we fall 10 games under .500 or even worse, the fat lady will start warming up the band.