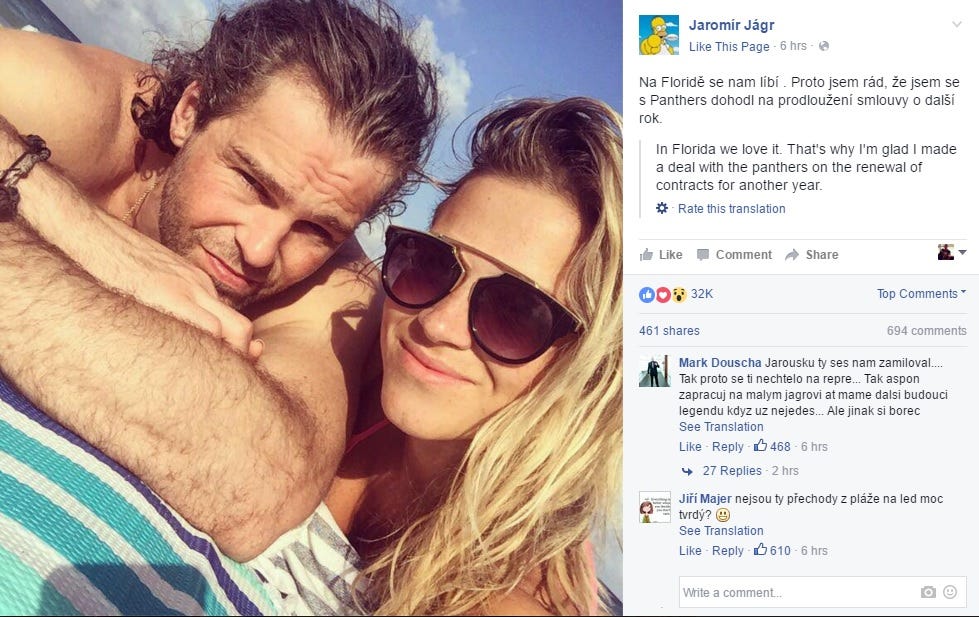 Yesterday it was announced that Jaromir Jagr and the Florida Panthers have agreed to a 1-year contract extension. Jagr will turn 45 next season so I guess it makes sense to only go 1 year at a time from here. Now obviously the Florida Panthers have a nice little core to work with and just need to find that extra missing piece or two if they want to be legitimate contenders. Luongo is getting older but seems to be aging like wine (in the regular season at least). Ekblad is a man-child and not in the way that Portnoy is a man-child. Barkov is a baby Kopitar and then I refuse to believe that Jaromir Jagr is anything less than immortal. So sure, it makes hockey sense to stay in Florida another year to see if the Panthers can finally turn the corner. But the real reason Jags is staying in Sunrise? Well isn’t it obvious?

There are 3 things in this world that Jaromir Jagr loves. He loves hockey, he loves gambling, and he loves banging girls who weren’t even born yet when he first made his NHL debut. Hell, I think at this point if you were alive when he won his Stanley Cups, you might be out of his range. He’s not going back to Jersey. He’s not coming back to Philly. He’s not gonna go to fucking Vancouver or anywhere in Canada. Jaromir Jagr has found his spot on the beach and just gets to go fishing for smokes in bikinis all day long. The man is a legend and legends never die.