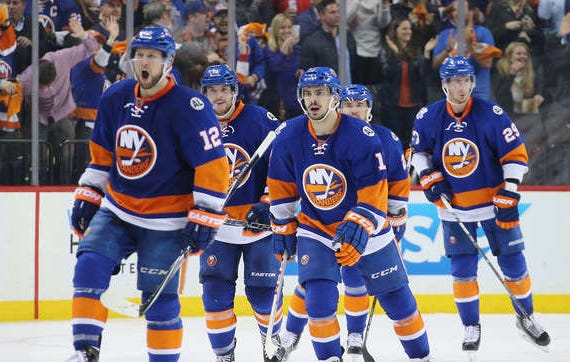 Following Tuesday’s heartbreaker of an OT loss, tonight’s Game 4 in Brooklyn has all the fixings for a must-win[they are all but you get the point]. Going down 3-1 to a team that’s looking to repeat Cup Final appearances is like showing up to school in US Polo Assn. when everyone’s rocking that Ralph – it’s all over from there.

As much as the Game 3 loss sucked, the Isles did not. They played a game worthy of winning but in the end fell short due to a few breakdowns and a Tampa team that knows how to finish their chances. If they can replicate their play from Tuesday their chances of heading down to Tampa with the series tied are quite good.

The best fourth line ever™ played a huge part in Game 3 – Martin was getting in front of net and throwing boes, Clutterbuck used his ever so underrated wrister to put the Isles ahead late, and Cizikas was all over the ice like a madman, something all three players are known to do well and need to continue doing tonight. I wrote about it before Game 3 but this team feeds off of the fourth line. Whether its the energy they display or the the momentum they created by laying the body, this line not only gets the crowd back into games but their teammates as well. It’s on them if they want to get them going and going early.

I would like to see Ryan Strome make his return after getting healthied on Tuesday. Despite his youth, Strome seems to handle getting sat for a game or two well and seems to always respond in his first game back. It’s possible we see him get the go tonight in place of Steve Bernier or even Brock Nelson, who has been flying under the radar of productivity all series. Nothing on Brock, I think he brings a lot to the table in a quiet manner, but like Kevin Harts baby girl once said, somebodies gotta go. Executive decisions.

All signs point to Ryan Pulock making his own return from injury though as I write this it’s not a guarantee. Getting #6 back into the lineup would be a major boost of confidence and add a well needed point-shot on the powerplay, something that has been the Isles achilles heel all series.

Again, game 3 sucked, but the Isles didn’t. Their rolling into Game 4 with some good hockey behind them and a crowd that is desperate to witness for more hockey next week. If they can continue to do what they did on Tuesday I would expect to be looking up ticket prices for Game 6 by this time tomorrow.