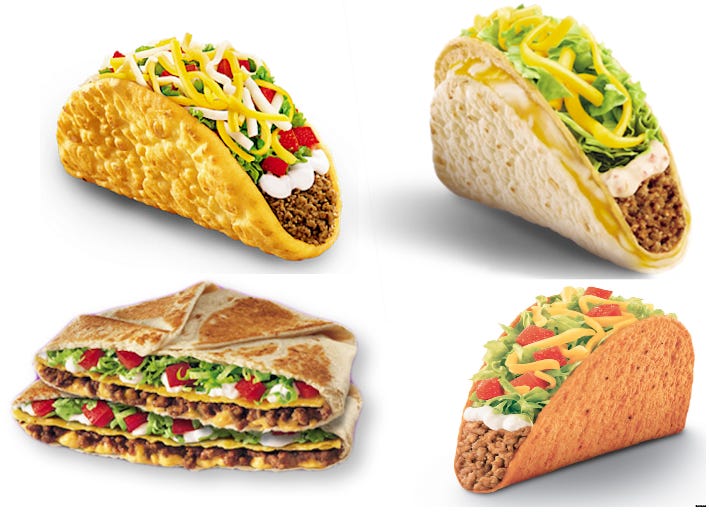 Pick which one of the four you would eliminate off the menu forever?

As a gringo that enjoys any holiday that can be centered around a unique set of foods/drinks, I am a huge Cinco de Mayo fan. Being able to have your powerful neighbor associate your country’s independence with unlimited chips and salsa to go with a half dozen Margaritas was a brilliant move by the Mexican government. Now instead of putting food you would find on a menu at a typical Mexican joint, I am going to go with Taco Bell because that is food for the common man, by the common man. Because the best thing you are eating at a Mexican restaurant is the chips and salsa. That’s not a knock on Mexican food, but a compliment on how good that combo is. So basic yet so good. The culinary pick and roll.

Now, for this Eliminator I have a clear choice on who I will be knocking off. My go-to order is the Chalupa meal with a nacho Doritos taco. If I feel a little saucy and want to mix things up, the Cheesy Gordita Crunch is the Chalupa’s understudy on my menu (in this exercise, it’s a Gordita with a regular taco inside, not the Doritos taco which is a savvy veteran move). Which means I am knocking off the Crunchwrap Supreme. I understand that a lot of people ride or die for the Crunchwrap, but not me. Just too much going on inside that weird flattened taco thingy. Plus I like easily being able to delegate what is staying in and what is going out of my shell. A spork is a MUST when eating at Taco Bell.

But as always, you can vote below to make your voice heard. So make sure you vote and then head to some sort of Mexican restaurant after work to get mud butt like the rest of America. Happy Cinco de Mayo!

You may have to open “See previous responses” in a new tab to see the voting results.
Follow @TheClemReport