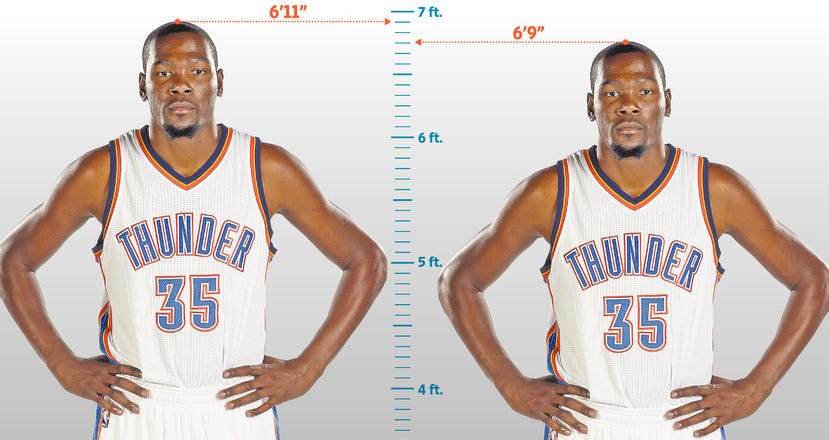 WSJ - Kevin Durant is 6-foot-9. That’s his height by all official accounts—the NBA, the Oklahoma City Thunder, his Wikipedia page—and that’s how Durant will be described throughout the basketball playoffs. As it turns out, though, there is one person who disagrees. His name is Kevin Durant. This mysterious revelation came during a routine discussion after a regular-season victory over the Los Angeles Clippers. The Thunder star was describing his game-winning block on the Clippers’ Chris Paul, and that’s when he confessed. “He’s 6 feet tall,” Durant said, “and I’m 6-11.”

It was a rare example of Durant slipping up by mentioning his actual height. Since joining the league, Durant has gone with an extremely conservative height, one that Thunder teammate Steven Adams calls “bull—.

Durant’s case is particularly odd, though, since he stretched the truth to make himself shorter. Durant, whose team is tied 1-1 with the San Antonio Spurs in the Western Conference semifinals, said he often lies about his height depending on whom he’s speaking with.

“For me, when I’m talking to women, I’m 7 feet,” he said. “In basketball circles, I’m 6-9.” There’s actually a basketball reason behind Durant’s white lie. “But really, I’ve always thought it was cool to say I’m a 6-9 small forward,” he said. “Really, that’s the prototypical size for a small forward. Anything taller than that, and they’ll start saying, ‘Ah, he’s a power forward.’ ”

Hey, I guess me and KD aren’t that different after all. We both lie about our heights. Me so I can ride the roller coaster at Kings Dominion, him because he thinks saying he’s a 6’9″ small forward sounds better than his real heigh at 6’11”. I completely disagree with that, mostly because I don’t think anyone will watch a basketball game and think Durant is a power forward, but I see where he’s coming from. The crazy thing is that he lies to women about his height, just like the rest of us. It isn’t good enough that he’s 6’11”, he still lies to chicks and gives himself that extra inch. I’m over here scraping and clawing for every last inch I can give myself (I’m truly 5’9 but have been known to say 5’10…kinda like the boss who is 5’6 and also claims 5’10), meanwhile Durant still has to impress the ladies by giving himself the title of a 7 footer. It’s truly incredible that no matter who you are, my short self or giant Kevin Durant, we will still lie about our heights. Kinda makes me feel better about being vertically challenged, knowing even the tallest of the tall go out of their way to make themselves taller. Again, we aren’t all that different, him and I. KD to DC is back on!