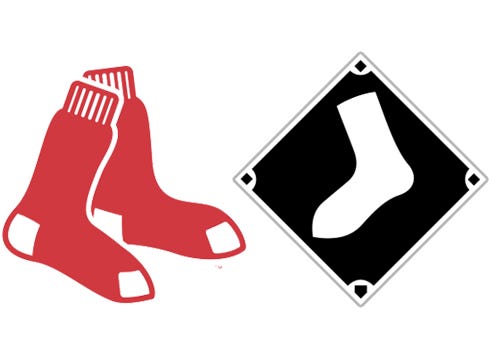 Before we start, let’s get this out of the way now: “WSD YOU FAT GUNT, THE RED SOX ARE THE ONLY‘SOX’ IN BASEBALL!! NO ONE GIVES A FUCK ABOUT THE WHITE SOX!!!”

How’d that feel for you? Good? Did it sufficiently arouse the midget syndrome you undoubtedly have as a common Boston fan? I’m sure it did, and I’m glad you feel better about yourself. But let’s move on from there and break down this series a bit, shall we?

The Red Sox and White Sox are entering the series with the best two records in the AL, but they have done so in contrasting fashions. Simply put, Boston tries to outscore its opponents en route to victory, while White Sox ride their entire pitching staff. Here are a few quick notes on each team:

*Boston has a +22 run differential – they’ve scored the most runs in the AL, but have also surrendered the 3 rd most. They have a team ERA of 4.26 with a FIP of 3.88 and are right in the meaty part of the bell curve as a pitching staff. They also have the best offense in baseball through one month, as they’re hitting .285/.347/.454 as a team. They’re offense, top to bottom, is one of the most dangerous in baseball.

*Chicago has a +25 run differential – They’ve allowed the fewest runs in the AL, but are just 7 th in runs scored, even though they’ve played more games to date than anyone else. They have limited opposing offenses to 1 run or less in 15 of 26 games this season with 6 shutouts. Offensively their team slash-line is .244/.303/.393, not good or bad, but similar to Boston’s pitching staff, it finds itself as the median as a team offense.

*Chicago is 16-1 in starts made by Chris Sale, Jose Quintana, and Mat Latos

*Jose Quintana has the lowest ERA in the AL over the last calendar year, but he’s a 3 rd starter who isn’t worth trading Blake Swihart for

There are a lot of players to love on Boston, from Betts, to Boegarts, to Pedroia. That said, without a hint of doubt, my favorite player right now on the Red Sox is Travis Shaw. Here’s a little tidbit about me; I own a travel baseball program and have made pretty nice supplementary income recruiting, scouting, and developing college bound baseball players. I’ve coached a lot of D1 players over the course of the last 3 years, players who may get drafted. If I’m teaching a player a swing, Travis Shaw is the player I’m telling them to emulate. He has the BEST swing in baseball. There’s no such thing as a perfect swing, but he’s as close as one can get.

Here’s a GIF with a quick breakdown on why I love his swing so much:

To generate power with the body fundamentally doesn’t change from sport to sport. Whether it’s a tennis player trying to maximize velocity on a serve, a linebacker trying to decapitate a running back, or a hitter trying to hit a ball to the moon, their power is all generated in a similar fashion, through their legs. Everything works from the ground upward. Shaw gets every ounce of his 6’4’’, 240 pound behind the baseball at the point of contact with his high leg kick. Players are often taught to “squish the bug” before making contact, which is one of the worst things a hitter can do. This zaps power out of hitters’ swings and will cause issues in hitters’ balance. Instead he should drive off the inside heel of his back leg, which will increase leverage through the baseball, thus increasing exit velocity. Shaw does this to perfection. Since his lower half is as close to perfect as one can be, the rest of his body follows suit, from his hip drive, to his core, to his wrists, arms and head.

Shaw’s just 2-17 on the year vs. LHP, but that number will improve once he sees LHP more. Most left handed power hitters are dead pull, but Shaw isn’t. Here’s his 2016 spray chart: 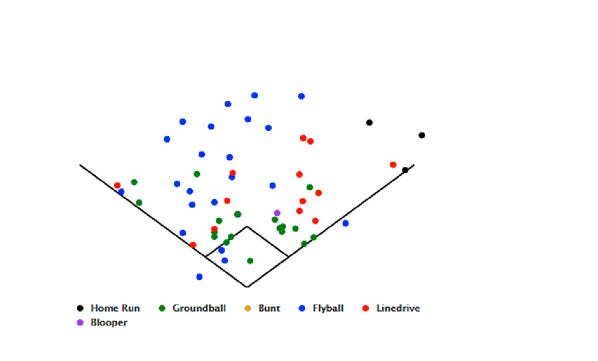 If Shaw were dead pull, it’d tell me he’s getting around the ball instead of staying inside it, and you could pretty much chalk him up to being a (very, very good) platoon player for his career. He’s not, so as of now, it tells me he has the ability to stay inside a fastball from a LHP and work up the middle and the other way. He’s not hitting LHP well now, but I have no doubt he will in due time.

Betts, Boegarts and DP are gonna get their hits and create their runs this series, so it’s up to the LH bats in Boston’s lineup to produce on top of them, which is a tall task facing three LHP this series. If they don’t, the ChiSox win the series relatively easily. If they do, Boston does. Shaw’s my X-Factor for this reason, that is if Farrell isn’t a fucking idiot and decides to not play him, which is a different argument in and of itself.

The WHITE Sox offense has been average this season, though it has improved over the last week or so.That said their best player, Jose Abreu, has been their worst player thus far on the season. This is a trend that HAS to stop this series. He’s riding a 4 game streak of 2+ hits, which is great on paper, but every one of them has been “KC Specials” to right field. AL pitching has figured him out a bit by pitching him hard in/ soft away. Abreu needs to adjust and start turning on pitches again. I’m not gonna go into a long diatribe on fundamentals and what adjustments I think he should make, but Abreu needs to start hitting with authority again. ‘Nuff said.

White Sox take 2-3. Quintana will give his standard 6 and 2/3 of <2 runs tonight and the Sox will beat Steven Wright around a bit. They just saw RA Dickey about a week ago, which should help them with Wright. Danks has no choice but to pitch at least somewhat effectively tomorrow; if he doesn’t that might be wraps on his career on the South Side. I don’t think he does, but again, Boston doesn’t hit LHP well and Clay Buchholz is dog shit, so that game might be a toss-up as well. Carlos Rodon will get in a groove early and throw strikes while piling up 10+ Ks. It could very well be a sweep. Let’s fucking boogie! I’ll be live tweeting/trolling Red Sox fans the entire series. You can follow me here: