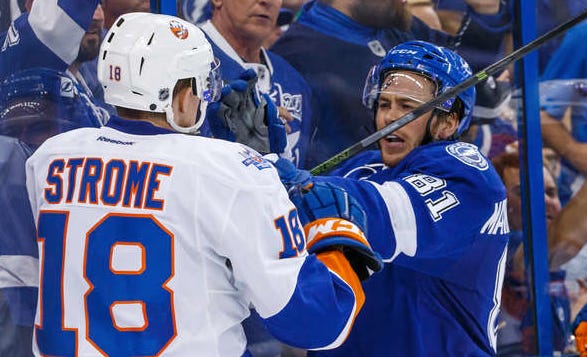 I’m back in the saddle after missing Game 2 like true Dorito Dink [valid reasons, trust].

It seems like I didn’t miss much in the 4-1 loss from what I was told. The Fourth line couldn’t creating energy like they did in Game 1. As Tampa Head Coach Jon Cooper reuniting the triplets and throwing them out seemingly every time the BFLE hit the ice was/is the perfect match for Clutterbuck-Cizikas-Martin, so I would expect to see more of the same tonight. As much as this team runs through John Tavares, the same argument can be said about the best fourth line in hockey. If they’re not revving the team isn’t revving.

Heading into tonight the story is the same as it’s always been. The fourth line needs to find a way to get into the triplets’ heads, Greiss and the defense need to be able to handle the quick counterattack Tampa possesses, and by all means, pass. the puck. to JT.

The only lineup change coming seems to be Bailey in for Strome, which is something none of us are happy about. Strome has clicked well with Princey since being scratched and their style of play fits this series perfectly – Fast paced, finding open ice, and a ton of silky passing. Have to assume Cappy is thinking defense by going Bails over Strome, but regardless, that’s a hard pill to swallow.

This team thrived in Game 1 by allowing the fourth line to set the pace, while the top-6 capitalized on any and every chance they got. Find a lane, get the puck on net, and see what can happen. Pucks On Net Life™ is one of the easiest ways of life to live yet so many Islanders refute the process. If you can see the net, shoot the puck. Why else do you think fans are telling you to shoot from their  seats, because we know how to play the game better than the players. Duh.

First game in Brooklyn since JT did JT things and sent this team into the 2nd round, I would expect as close to a Coli-like experience as ever, and this team thrives off that shit. Get loud get rowdy, get behind this team and allow them to rise to the occasion.