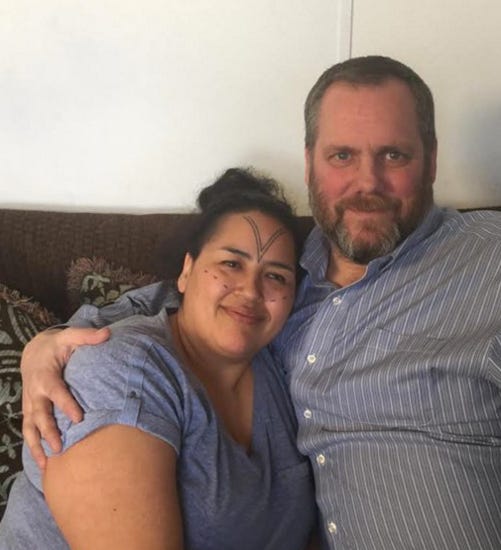 Fox 32 - Every year on their anniversary, Mike and Angela Hovak eat KFC. The tradition began at their wedding reception, where everyone dined on the delicious fried bird. But this year, the couple ran into a problem because the nearest KFC had closed down. Mike, though, was going to let that kill their tradition. “We have to keep traditions alive,” he told CBC. So, Mike and one of his sons hopped into their car and drove to the next nearest KFC, which was 435 miles away. Round-trip, Mike and his son drove 870 miles. Once they were at the KFC, Mike ordered 15 buckets of chicken. Mike says they responded with, “Uh,’ that might take a little while.” As for the drive time and the $600 in fuel and chicken, Mike says it was “worth every penny.” Mike and Angela have now been eating KFC on their anniversary for 15 years.

Is that what love is? Is love driving 900 miles round trip to get your fat wife with her terrible face tattoo a bucket of chicken? If so, I’m out. Don’t want it, don’t need it. Do you know how far 435 miles is? That’s from here to Boston. I have no desire to drive to Boston to get anyone a bucket of chicken. That bucket of chicken could be made out of solid gold and be filled with the keys to Nina Agdals pussy and I’d probably still go “meh, too far” and sit back down on my couch.

I get they’ve eaten KFC every year since they got their fat asses married to each other. It’s cute. It’s great. It’s dandy. But if she loved him she’d be like nah it’s cool if you don’t drive 8 hours to get me some chicken. Reheated fast food never works out for the best anyway. She killed the tradition when she didn’t take the drive with him. If she was that into it, she would have gone. We’ve all done shit like this for girls- you do some grand gesture that you think will blow their socks off and they are like “oh, thanks” in that “I really wish you didn’t do that, now I have to pretend to be thankful and into it until it’s over” voice. Same thing here. Bet that woman doesn’t even like KFC. They ate it once and now both people are scared to speak up because this stupid ass tradition.