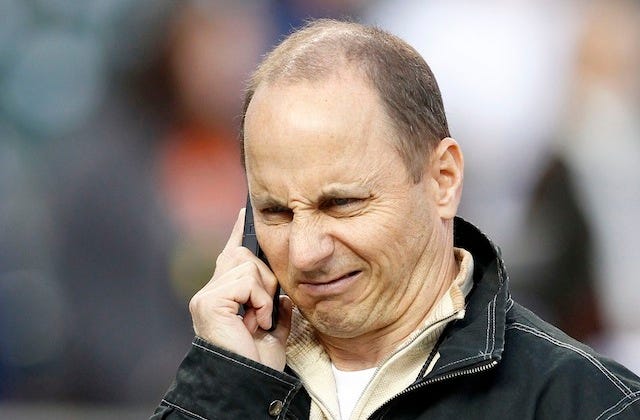 NYDN – An agitated Brian Cashman was in no mood Monday to sugarcoat the Yankees‘ awful start.

“I’m frustrated as hell,” Cashman said. “It was a horrific month of April where we underperformed in almost every category, it feels like.”

But despite the Bombers’ 8-15 start that has them in last place in the American League East, Cashman won’t be sending any reinforcements to Baltimore Tuesday, giving the current roster a chance to pull itself out of the basement. Cashman will be in Baltimore when the series opens, but said that his trip was planned long before the latest losing streak.

“There are no changes in store; ultimately, I’ll be forced to make changes if it continues,” Cashman said. “What needs to change is the players that are capable of so much more on this roster that I’ve put together starting to perform to those levels.

“Over time, if it continues, we will be forced to do things that weren’t part of the game plan. That’s just what has to happen at some point.”

Cashman pointed to a number of players on his roster playing far below their career averages as a major reason for the Yankees’ team-wide slump that has turned their bats into icicles in recent weeks. Asked whether manager Joe Girardi or any of his coaches are on the hot seat, Cashman quickly answered, “No.”

Finally someone from the organization has said what we’ve all been thinking. This wasn’t you standard coverup saying that guys were “catching bad breaks” or “hitting the ball hard, just at people,” and thats exactly what we needed. I don’t think any of the players needed someone to tell them they stink this year but Cashman addressing it could be the first step in fixing it.

When you have 4 regulars in your lineup batting under .225 and Aaron Hicks batting under .100 getting a significant amount of playing time, you aren’t going to win games. It’s not rocket science. The problems started as a RISP issue but have now grown outside of that to an issue of just getting on base in general and putting together quality at bats. I said it on WFAN this weekend, but these guys for the most part look lost and there is no quick fix. If they can put together the offensive output from Sunday night they can win games, but until we see that consistently, this slop will be the norm.

Like Cashman said, there is no cavalry coming from to save this team. If we continue to play the way we have, Chapman won’t matter. Chapman is only a factor if we have a lead in the 9th and the combination of our offense and starting pitching is making it so those chances aren’t there. The only other boosts that we could possibly get are from AAA and those options aren’t pretty.

Refsnyder isn’t ready to play 3rd base at the MLB level. There isn’t room at 2nd and for as bad as Headley has played, Torreyes is a better option than Refsnyder. Later this year or next year, Ref might be an option but he spent Spring Training taking grounders off the face at 3rd so until he gets more reps at the hot corner, he can’t save the Yankees. The other option people talk about it Judge, who also isn’t ready. Judge struggled at AAA last year and started slow so it’s better in the long run to get everyday at bats. Maybe call him up later in the year, if later in the year even matters, but for now focus on making him a productive MLB player for years to come instead of pushing him to save a team full of bad contracts. Oh and Nick Swisher is also not the answer, If you need an explanation on that you should just log off the internet.

As for Girardi, he should be safe. He is doing the best he can with a team full of old players that aren’t performing. There are no moves to the lineup that another manager would make that would turn things around. This one sits on the shoulders of the players to simply be better and start to play like they’re capable of playing. If they don’t turn it around some of them won’t be here. Anyone on an expiring deal (Beltran, Tex and Chapman) could be used as trade bait to get prospects back from contenders looking to make that last push, so its now or never for this crew.

The other person who will take blame for this is Cashman himself. When we gave Cashman a new 3 year deal I predicted it would be his last because the end of those 3 years is when the bad contracts are gone and the GM job in NY becomes desirable again. Now that we see where this team has fallen, we can see that it may be time for a change. The Castro and Chapman moves were great and most of these contracts were signed to win in 2009 but the game has changed. Cashman will probably continue to be a part of the organization but with the way things are right now, this could be the beginning of the end.

That is unless this team turns it around, which I still think they can because it’s so early and they literally can’t stay this bad. Its almost impossible for a team of these types of players to perform this bad.