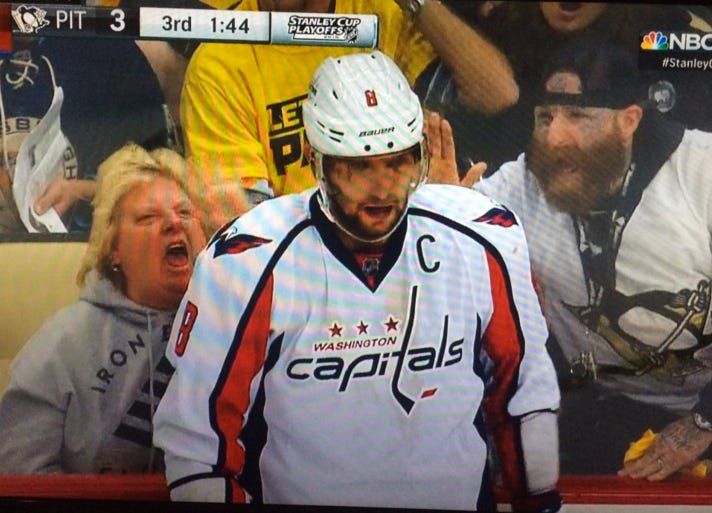 This is one of those games, like the Flyers game where Neuvy made 100 saves, where you just throw your hands in the air and say “well, what can ya do?” and you tip your cap to Matthew Murray. The Caps outshot the Penguins 49-23, outhit them 58(!!!!!)-23, and I don’t know where to find possession, but the Caps had to have dominated that as well. The Pens got some bounces, capitalized on them, and held off the Caps in the end to take the 2-1 lead. Again, what a game by Murray. Was a brick wall back there.

And what can you say about Ovi? Jesus Christ, what a monster. A goal, assist, and officially 9 hits, and it seemed like 20. A wrecking ball out there. Nobody has worked harder than him these playoffs. At one point I think he played something like 6 out of 8 minutes. Just wouldn’t leave the ice. Played 24:21 tonight. Hope he’s already sleeping.

So we’re on to game 4. The Pens split down here, the Caps need the split up there. If they play like tonight you have to believe they come home knotted up and have the home ice advantage in their favor. These are two very good teams and I feel the Caps are the better of the two. Huge, huge, huge game coming up on Wednesday. Huge, huge huge.

PS: Letang could be suspended for the next game. I know he wasn’t head hunting, but he hit Johansson’s head. He had that upward motion in his open ice hit. Even if it’s not intentional, you can’t hit someone’s head like that. Wouldn’t be shocked if Letang misses the next game, which would be beneficial to the Caps, and wouldn’t be shocked if he’s just fined. I’m leaning towards thinking the NHL will give him a game to stay consistent in cracking down on hits to the head though.