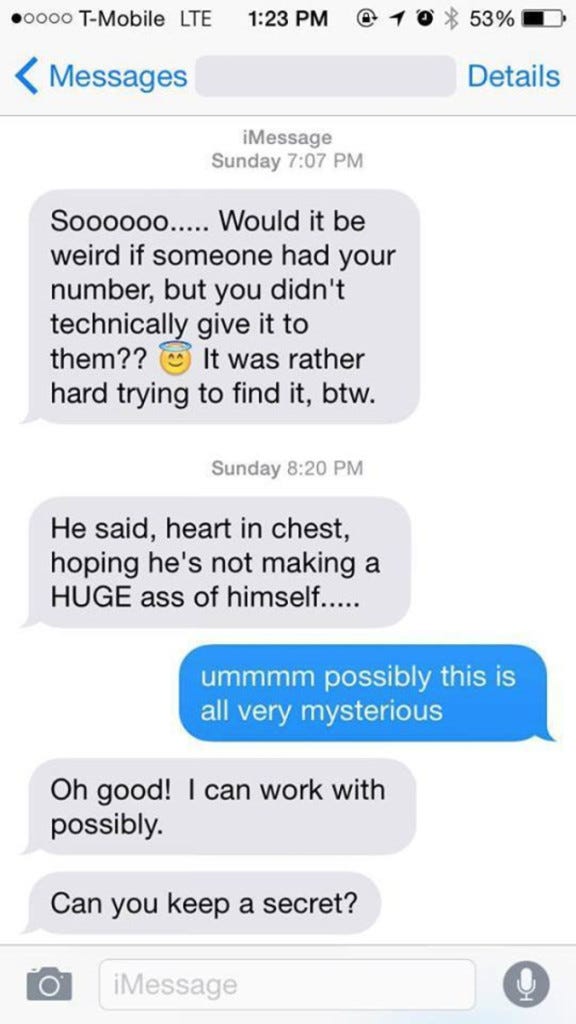 A couple weeks ago I wrote about some guy’s texts that were going viral after he lifted her info from a restaurant where she left her number. The consensus was that he was a creep but I thought his problem more so was that he was just completely and hopelessly incompetent and inexperienced with women. This guy though I’m getting full-on goose bump creep vibes. You decide: 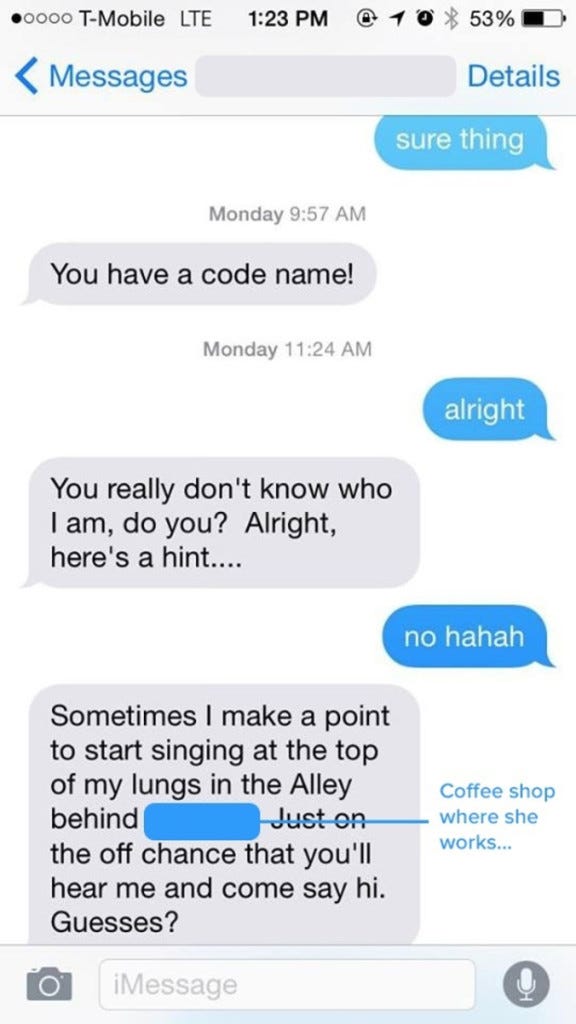 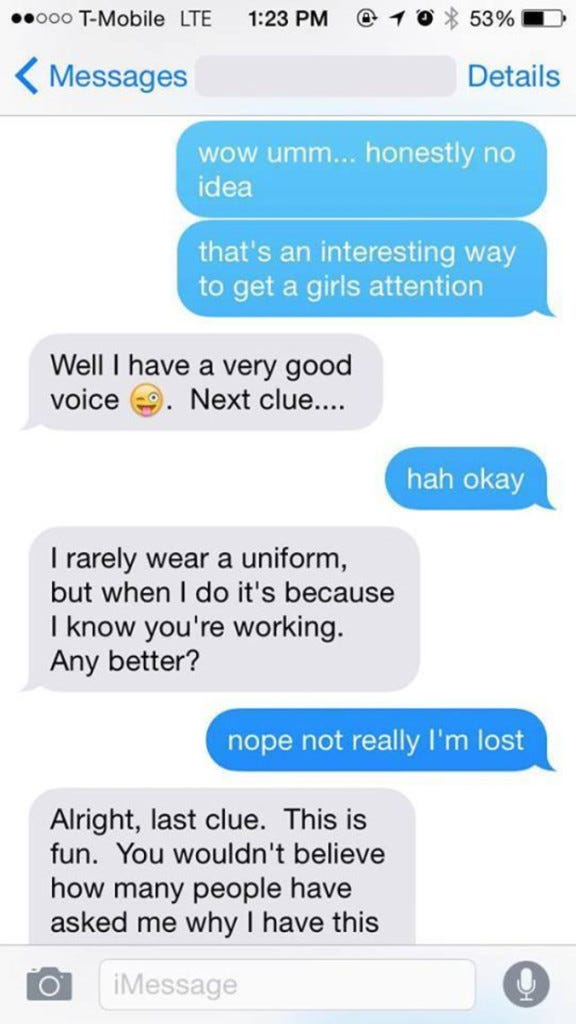 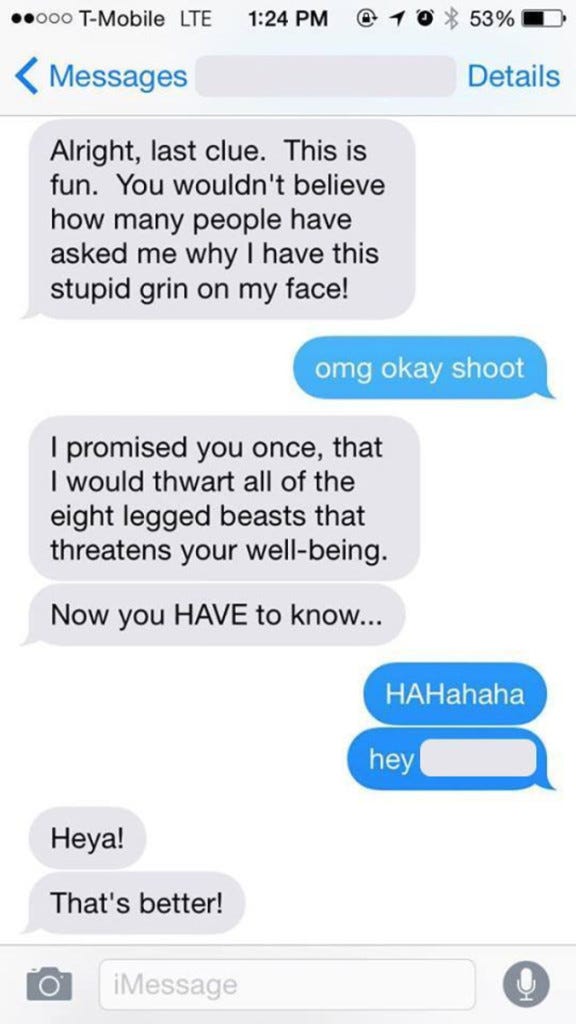 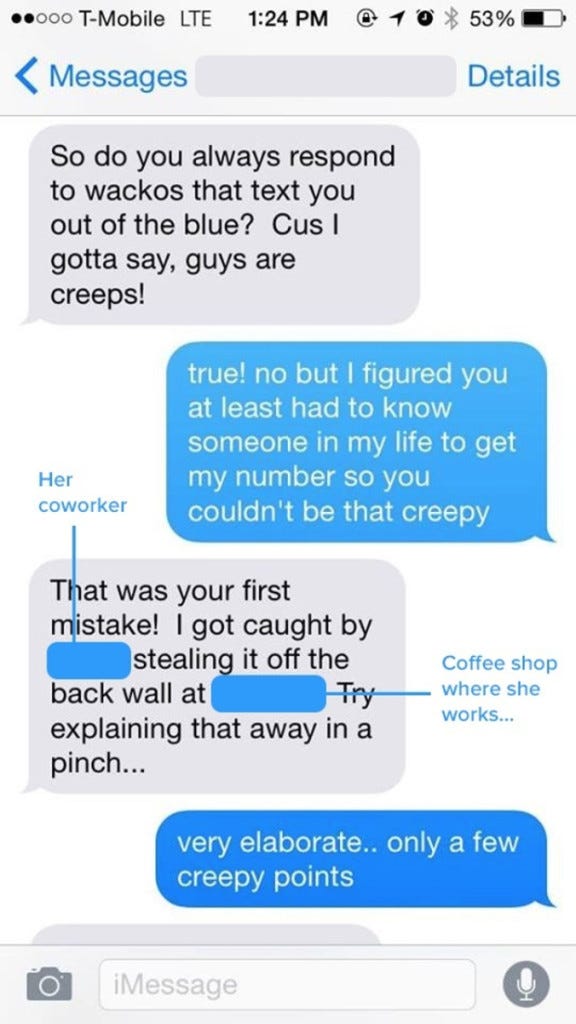 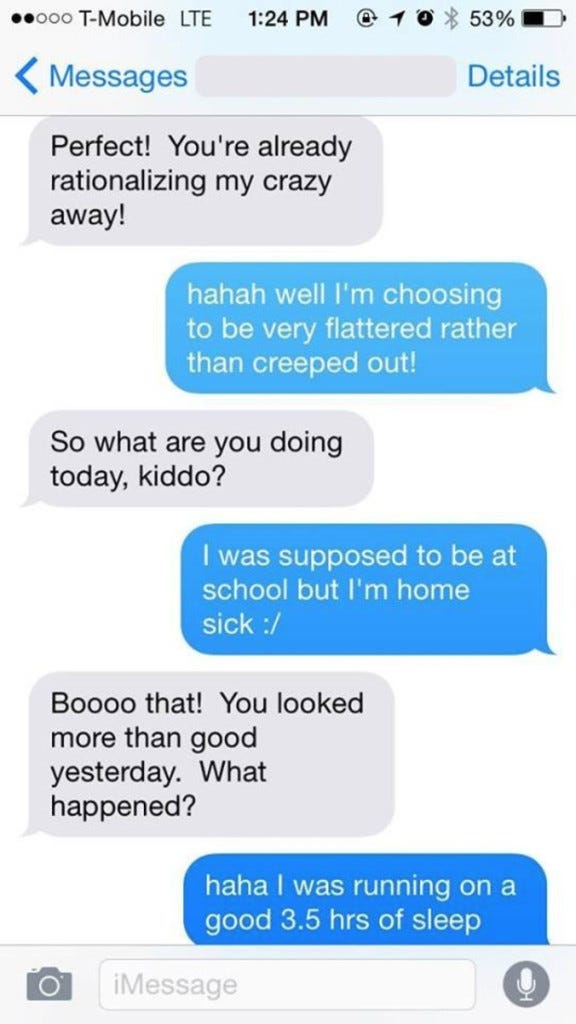 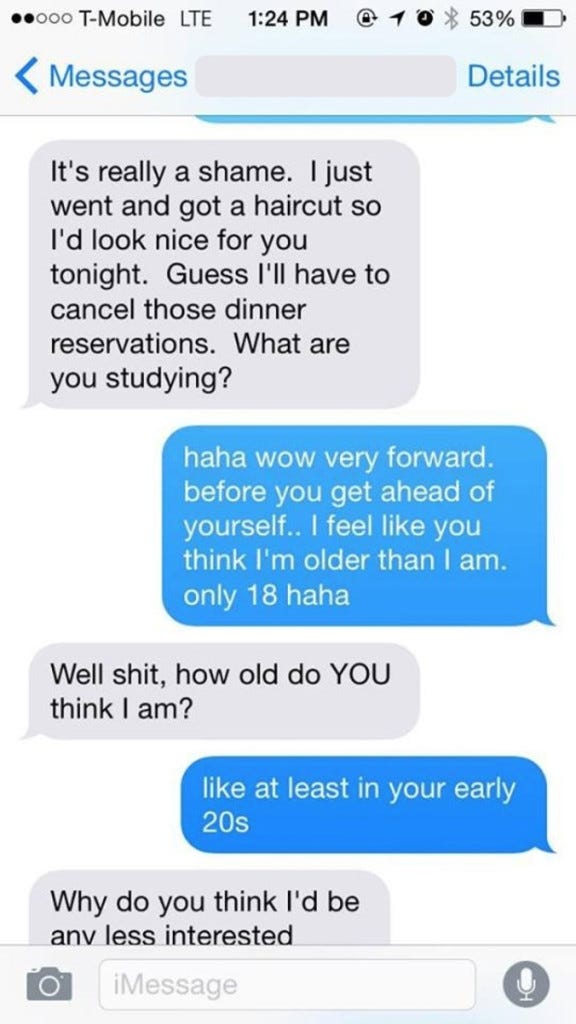 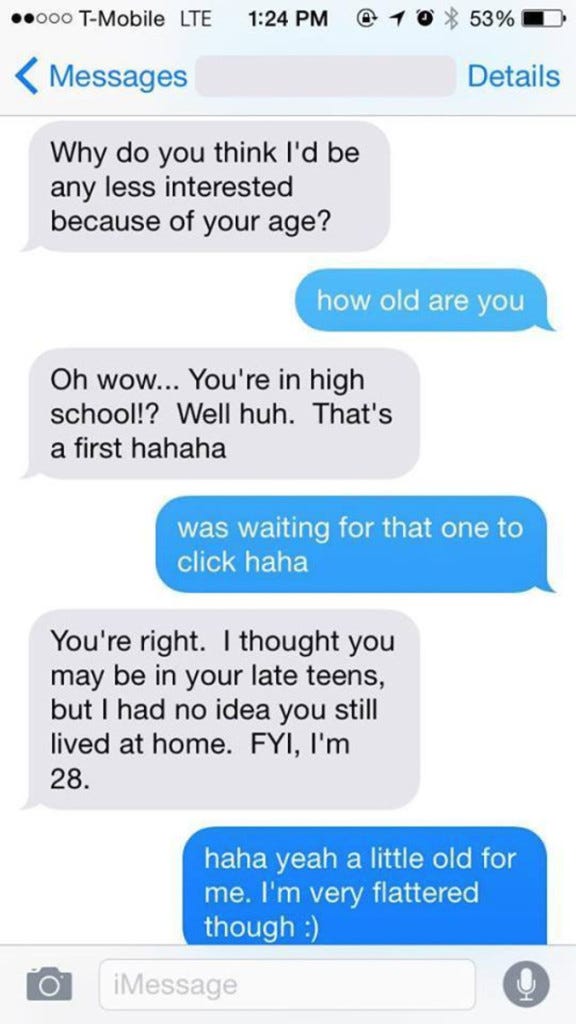 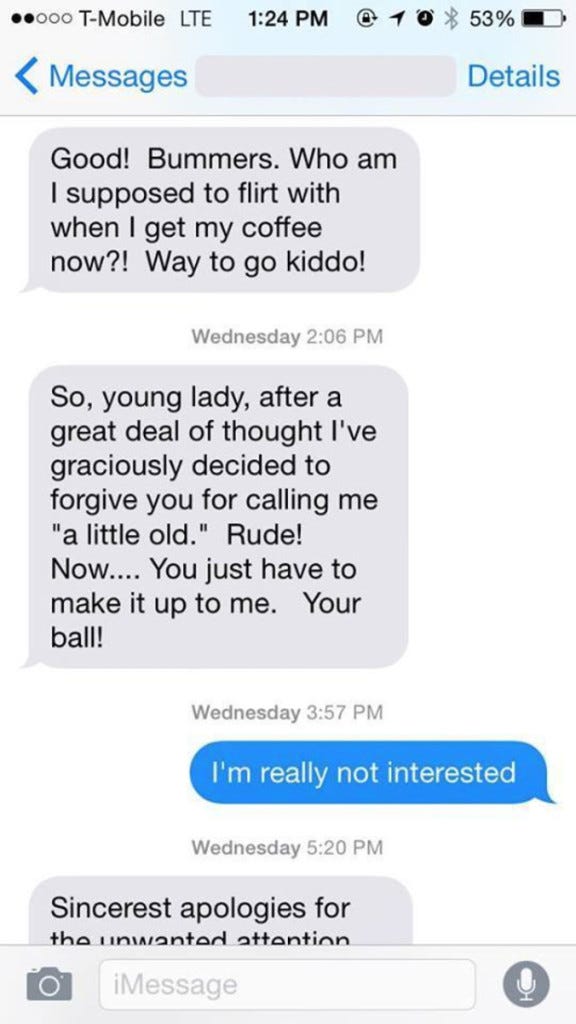 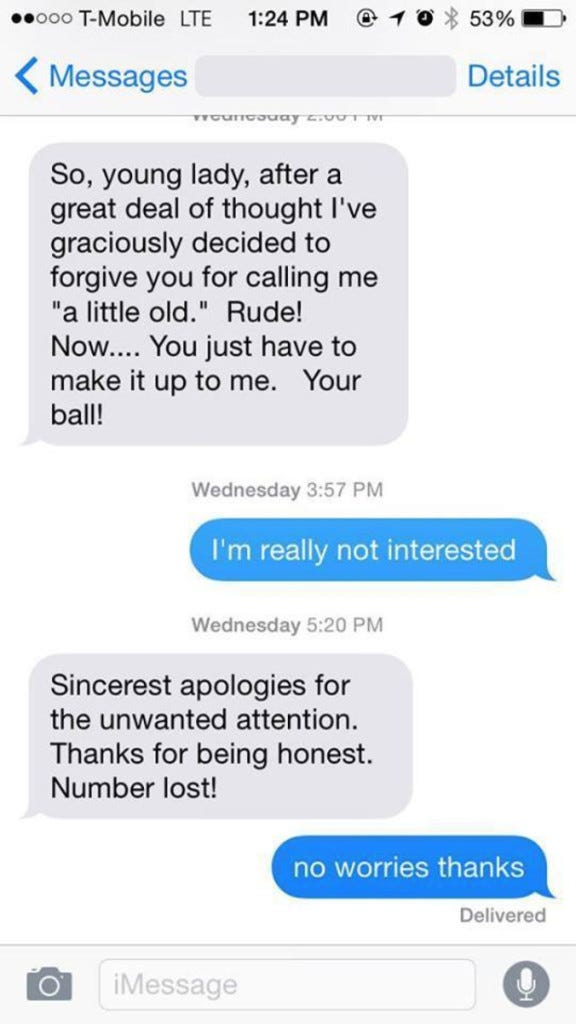 Right off the bat there’s a lot of weirdness here and even though this girl is just 18 and only in high school she handled it all like a woman much older with a lifetime of experience kindly dealing with weird guys. I mean she even said she was flattered as he was calling himself a psychopath. Overall you just can’t hate on her for how nice she was overall in preventing this dude from going bananas and blowing up the coffee shop.

But what particularly creeped me out was this dude’s response to her revealing she’s in high school. I get she’s 18 so it’s fair play legally but to me they have to at least be en route to a college campus to qualify as a viable person to talk to if you’re over the age of 25. There have been times I’ve talked to a girl and found out she wasn’t of legal drinking age and had to mentally power through that to keep talking. But this guy found out this girl was still in high school, started calling her “kiddo,” and then did that whole weird fake playful “However will you make it up to me shtick” is gross enough. But then you check out the time stamps and it seems like he actually had a few days to think about it? And he still came back with that reply? That’s next level weird. Still legal and whatever but if that combined with the overall try-hard air in the texts made me cringe so hard inside.

Overall creep rating: I’m going a 7.5 here. It’s hard to give away a 10 and it seems like this dude throwing in a dick pic or two gets him up to the 8-9 range with a chance to guy higher depending upon if he’s dressed like an adult baby or something similarly bizarre. But when your answer to “I’m in high school lol” is a raging erection hidden between the pages of Macbeth Cliff Notes you need to chill back. I’m also giving him a quarter point off for not being weird when she finally said “No thanks.” Next time wait at least until prom season passes before stealing a number, sir.