Yankee fans were praying for a rainout on Sunday night, and instead they got a sweep at the hands of the first place Boston Red Sox. Life is cruel.

But before we get into the good stuff, let’s address the elephant in the room right off the bat. David Price stunk. He was not good in his first start against the Yankees in a Red Sox uniform. There’s a few ways to look at this situation. First, the people who are saying that Price is a bust based on six starts are just trolls, plain and simple. It’s very much been a mixed bag, which is totally unacceptable. I get that, and I completely agree. They’re not paying this guy to be a mixed bag. But the idea that he’s awful to start the year just isn’t true.

If you want to tell me that you’re concerned about the velocity, I’ll totally buy into that as a legitimate concern. Via Brooks Baseball, here’s how Price’s fastball velocity looked six starts into the 2015 season: 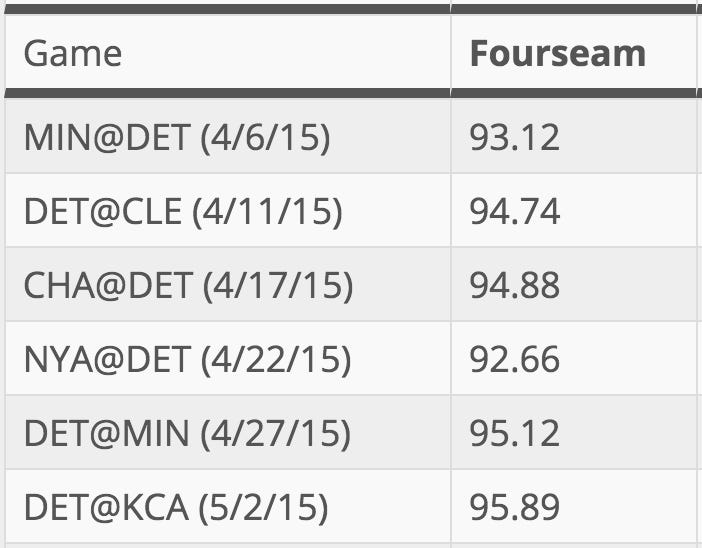 Here’s how the fastball velocity looks six starts into this year: 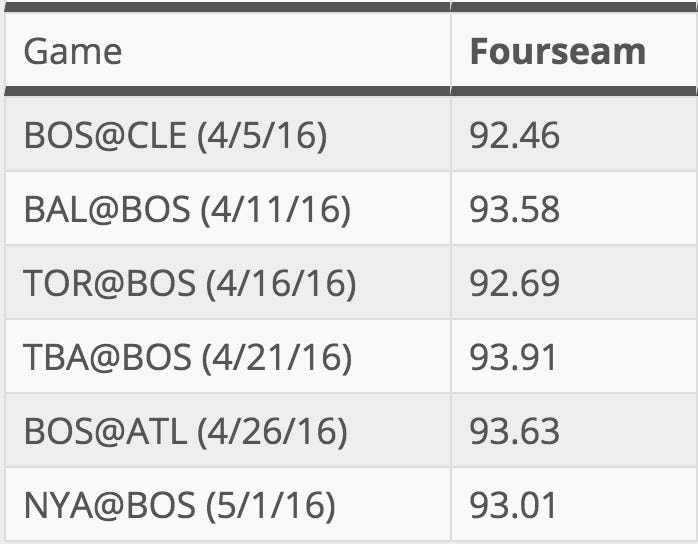 By now, he should be averaging about 95 MPH with the fastball in his starts, and he’s yet to average 94 MPH in a start. That’s a much different argument than the idiots on Twitter saying that he can’t handle the pressure in Boston. When you don’t have the velocity that you’re used to having, you’re not the same pitcher. He’s either got to adjust to the dip in velocity, or he has to locate better. The margin for error in regards to pitch location becomes smaller and smaller with each mile per hour lost on your fastball. According to him, he feels great, which would lead me to believe there isn’t an injury issue, so here’s to hoping that he’ll get some velocity back as the season goes along. Trends would also suggest that he does get stronger as the season goes.

People laughed at John Farrell when he compared this 2016 team to the 2013 World Series team (and they were kinda right, because they’re two completely different teams), but with the sweep of the Yankees over the weekend, this is the first time the Red Sox have been five games over .500 since that 2013 season. It’s also the first time that they’ve swept the Yankees since 2013. And the best thing about this team is that they’re not being carried by anyone. There’s no clear cut MVP at the moment, and you can go down the line and point to any player and they’ve more than likely done something already this season to help the Red Sox win a game (besides Clay Buchholz).

I’m not saying that the Red Sox are a championship team just yet, but that’s how you win a championship. Baseball isn’t a sport that you can be carried by just one man. You need those nights when your catcher who supposedly can’t hit for shit hits a monster home run that goes through the Citgo sign off of one of the best relievers in the game. That’s when you know something special is happening.

Christian Vazquez’s two run home run in the bottom of the seventh is what won the game, but Travis Shaw mashed a two-run ding dong in the bottom of the fifth to tie the game at six. Of Shaw’s three home runs, one has tied the game, another has given the Red Sox the lead, and the other was a homer in the bottom of the ninth inning to bring Boston within 2 runs of the Blue Jays. Shaw is now hitting .370 with a 1.062 OPS against right-handed pitching with 41% of his hits going for extra bases.

And I understand that everyone’s going to be talking about the game-tying and game-winning home runs after this one, but I look at the guys who quietly had a great night at the plate. Dustin Pedroia and Xander Bogaerts both had three hits in this one, and has anybody noticed that Pedroia leads the American League in hits? No? He already has five 3-hit games, and has at least two hits in 11 of his first 24 games this season. He’s hitting .324 with a .371 on-base percentage, and is back to being one of the best table-setters in the game.

Oh, and by the way, the New York papers should probably learn Christian Vazquez’s name. He’s going to be one of the best catchers in the game for a long time, and he’ll be behind the plate for that team that you’re competing against for a division title. Maybe not this year, but you know, when you guys are good again.

PS – Nice bullpen ya got there, JJ. Best bullpen ever!