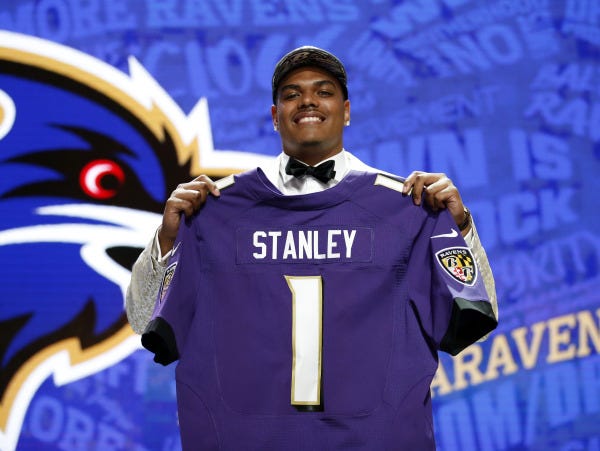 Another draft class in the books. We came into this draft with high expectations given where the Ravens were slotted. We came away after rounds 1-3 knowing that we had gotten some talented players, yet mostly disappointed that they weren’t the players we expected or had even heard of. I mean, who the hell is Kamalei Correa and why didn’t he even make 1st-team All-Mountain West?  But the more I learned about these guys, the more I came to realize the upside that they possess and that Ozzie had a very defined plan going into this draft. The plan is to get to the QB, which I’m sure was influenced by the way we all saw the Broncos terrorize everyone in their path in January. Suggs and Dumervil have a couple years left in them, but the idea was to get guys who won’t necessarily fill that role tomorrow, but fill that role in the years to come. Saturday’s rounds 4-7 only cemented that strategy, and Ozzie picked up a bundle of offensive talent along the way. So let’s meet the 2016 draft class.:

(if you feel like watching 13 minutes of game tape against USC, here you have it)

I discussed what Stanley brings to the table here on Friday, so I figure I’ll use this space to discuss the whole Tunsil situation. Yes it was a shitty situation. Was Tunsil the better football player? Maybe. Most would agree with that. But if there’s one thing I took away from the whole ordeal is that shit seems to follow that guy around. It may or may not be his fault, but that’s the truth. He’s got his stepdad with the lawsuit, he’s got videos leaking from his own twitter account… it was a circus. I don’t particularly care about a kid smoking weed as long as he doesn’t get suspended, and I wouldn’t really care about any of the other shit that’s followed him around if it was just an isolated incident. But it was too much. Ozzie made the calculated decision to avoid that risk and it was the right one. Time will tell if Tunsil will pan out, but I feel confident in the guy we got.

This was the headscratching pick, or at least at the time. Ozzie traded back from 36 to 38, and then 38 to 42 to make this pick, scooping a 4th and a 6th rounder along the way. It was clear that he was confident the guy he wanted would still be on the board whenever he made his selection, and apparently this was his guy.  I was expecting somebody like Mackensie Alexander, but Ozzie’s confidence in this kid is enough for me. He’s an versatile linebacker who especially excels at rushing the QB off the edge. He can cover tight ends from sideline to sideline and beat tackles with the speed rush. We wanted guys who could step in for Suggs and Dumervil down the road and this is the guy.

Kaufusi is another guy who can get to the QB, with his abilities coming more on the interior than Correa. He, along with Brent Urban, will compete to fill the void left by Chris Canty and Courtney Upshaw. Like Canty and Urban, he’s tall and surprisingly athletic for his size, with long arms that can bat passes and set the edge. Kaufusi also brings some leadership qualities, as he was a captain at BYU and is one of those “coach’s sons”.

Tavon Young is a bit undersized for a corner at 5’9, but that’s okay. I don’t think he was drafted with the idea of developing him into a starter, but rather a nickel corner who can blanket guys in the slot. These days, you can never have too many of those guys in the NFL, especially with some of those guys they have in Pittsburgh and New England. He’s quick and fluid out of his breaks, and has the potential to be a playmaker should he get the ball in his hands. He doesn’t really bring much to the run game, but I wouldn’t expect him to have to deal with that much anyway.

This was one of the more exciting picks in this draft class. Moore was a beast in the vertical game, averaging over 22 yards per catch the last two seasons. His 40 time (4.53) doesn’t really do him justice. The guy can fly, and even elevated his game against tough competition. The guy only needed 3 receptions to go for 221 yards and 3 tuddy’s in 2014 against Ohio State, and he torched William Jackson of Houston to the tune of 140 yards and 2 TD’s last fall. He’s got decent size at 6’0, 205 lbs, and has shown the ability to win contested balls with his long arms. The WR situation is a bit cloudy beyond 2017, so this guy could play a huge role down the road.

Alex Lewis is an interesting pick as he is a guy who has played both guard and tackle in the past. I think Ozzie liked having a guy like Kelechi Osemele the past few years who can be plugged in at any given spot, and he saw that ability in Lewis. Lewis’ size at 6’5 290 lbs leans more towards the guard position, but he played left tackle really well for Nebraska. He’s got good footwork and was voted a captain at Nebraska, which negates (in my eyes) an assault charge dating back to 2013 which appears to be an isolated incident. He certainly won’t see playing time early, but he should provide depth and may develop into a starter down the road.

Henry should add some depth on the defensive line, and has shown the ability to play in any scheme you put him in. He’s stout against the run where he can really use his brute strength. He has shown intelligence in identifying blocking schemes and blowing plays up, and was even regarded as a possible 1st rounder by Mel Kiper when he declared for the draft. Brandon Williams is a guy who may or may not be leaving in the next couple years to free agency, and Henry is a guy who could fill his shoes when that day comes. It’s also worth noting that the Ravens have an in with Jim Harbaugh who can vouch for the kid. And he wore #69, always a plus.

Love this pick. All the guy does is get in the end zone. He only has the 2nd most touchdowns in NCAA history, nbd. 4,480 yards, 72 rushing touchdowns… plus another 88 receptions for 972 yards and 15 more touchdowns. All the guy does it produce. He likes to run downhill and pick up yards after contact and given those stats, it’s obvious that he has a nose for the end zone. When you can get a guy like this late in the 4th round, it’s obvious to me how silly it is for a team like Dallas to spend the 4th overall pick on a RB. Elliott will be a great player, no doubt, but you can get good RB’s in later rounds and use those top picks in other areas. Anyway, Dixon should compete for snaps behind Forsett with Buck Allen, Lorenzo Taliaferro, and even Trent Richardson. It’ll be tough competition, but there’s plenty of snaps to be had, especially after 2016. I expect Dixon to play a big part.

Here the Ravens drafted yet another pass-rusher. Judon (#9 in the video above) dominated at the Division II level with 20 sacks last year, but is fairly unpolished. He’s got good size and a good first step, and showed an ability to set the edge well playing a 4-3 defense. Given the transition to a 3-4 and how raw he is, Judon will very much be a project. He may become a contributor and he may not. We’ll see.

YES. SO MUCH YES. This pick is exciting for so many reasons. A good ol Maryland boy who dominated the college ranks at the local service academy? Sign me up yesterday. You don’t become a 4-year starter at QB for the Naval Academy if you don’t intangibles through the roof. You also don’t set the NCAA record for career TD’s without having supreme athletic ability. Mix all that up and you’ve got yourself a helluva football player. I don’t care if he has to play a new position, I’m confident this guy can get the job done. He’s been working on the transition to WR for months now, and could probably be a good contributor on special teams coverage as well. So much upside, so much to like about this kid. And yes, the Ravens DID draft the all-time #1 and #2 leaders in NCAA TD’s and yes, both picks came on Day 3 of the draft.

Canady should add some more depth to a secondary that has needed so much of it the past few years. The pros are that Canady was a 3-year starter on a power conference football team. He’s seen some pretty good receivers in his day and should be experienced enough to compete for a jersey on Sundays. The cons are that his ceiling isn’t terribly high. He’s more of a guy who will play smart and disciplined in zone coverage, but won’t blanket receivers all over the field for 50 snaps a game. Nonetheless, the Ravens needed to add a couple corners and this pick fit the bill.

And there it is. Another fantastic draft class by Ozzie Newsome. It’s not flashy at the top, but a couple of those guys in the 4th round will become stars. Some will obviously flame out too, but that’s why you do things like move back 6 spots and stockpile draft picks. The more darts you have in the dart game that is the NFL draft, the better. No better dart thrower than the Oz.