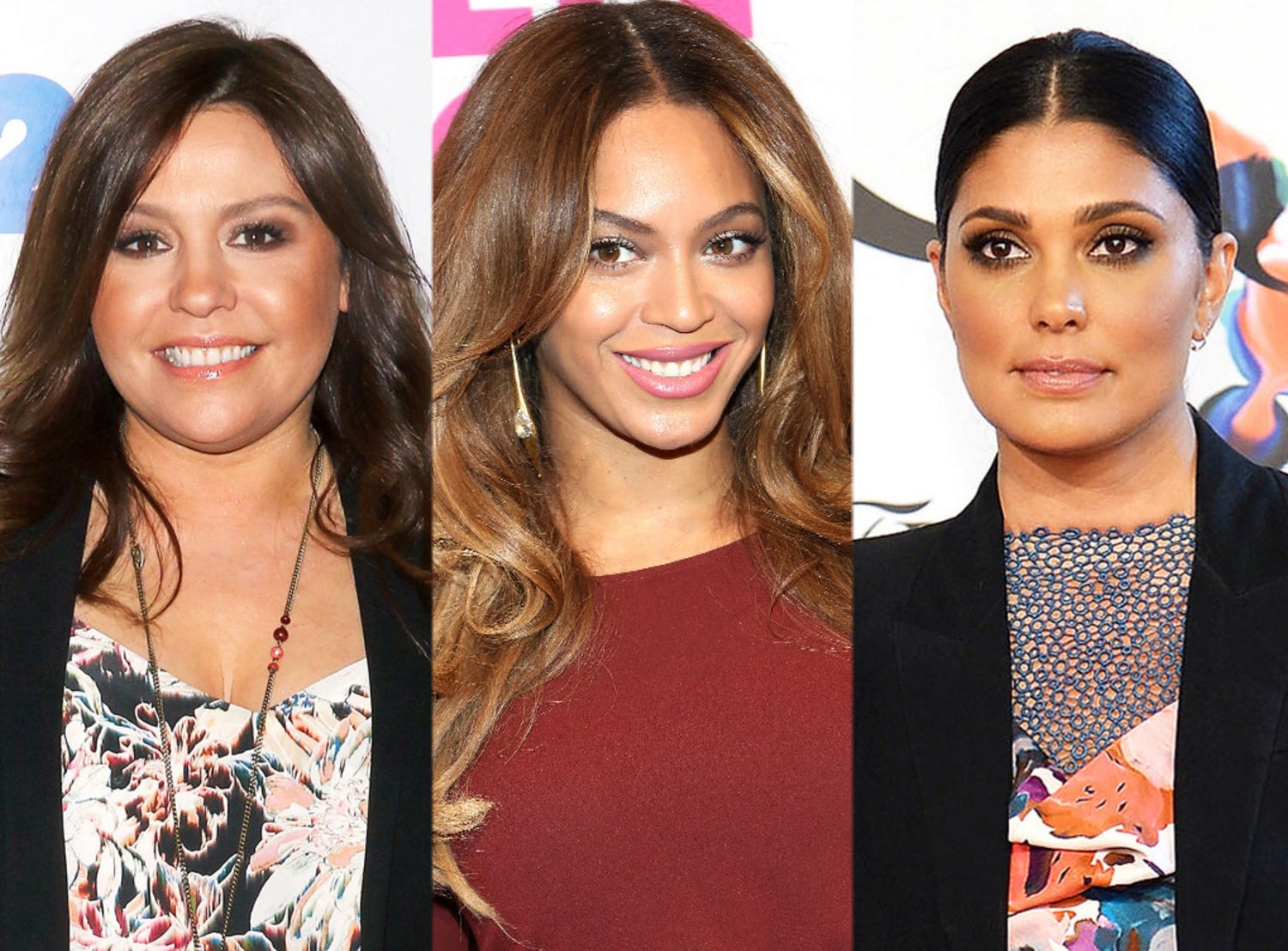 US Magazine – Just when we thought this couldn’t get any crazier! Beyoncé’s unforgiving fanbase misidentified TV chef Rachael Ray as fashion designer Rachel Roy, who recently hintedthat she’s the woman referred to as “Becky” in Queen Bey’s new song. The 34-year-old entertainer released her new album, Lemonade, on Saturday, April 23, immediately after debuting the accompanying visual album film on HBO. In one of the tracks, titled “Sorry,” Beyoncé slams her cheating lover for hooking up with a woman that she simply calls “Becky.” “He better call Becky with the good hair,” she scornfully croons.  Roy, who was reportedly the cause of Bey’s hubby Jay Z and sister Solange Knowles’infamous elevator fight in May 2014, took to Instagram shortly after the special premiered and hinted that she’s the woman Beyonce was referring to.  Unfortunately, some members of the Beyhive swarmed to the wrong Rach. The 30 Minute Meals host’s Instagram comments quickly filled up with lemon and bee emojis, in addition to some pretty nasty messages. “Throwing your cookbook in the trash!” one user wrote, while another commented on a picture of a gourmet cheeseburger, writing, “I bet that’s exactly what you were whipping up in Jay Z’s kitchen while Beyoncé was out performing.”  “Oh I loved hot chicken fajitas but I will never make them again after what you did you did to the Queen,” wrote one user. “Never watchin ur show again Rachel u r a homewrecker!” wrote another.

Goddam I love the internet. On Friday morning we didnt even know Beyonce was going to put anything out, by Saturday morning Black Twitter thinks that Rachael Ray fucked Jay Z. What a time to Bey alive.

I’m sure a lot of you are confused, as the majority of you are white straight men, which falls on the complete opposite end from Beyonce drama on the spectrum of life. So let me give a brief white guy recap of what happened this weekend to take over the entire internet. This is good knowledge to have for the next chick you’re hitting on at the bar. This is like Hocus Pocus. Chicks LOVE this shit. So pay attention.

Friday night – Beyonce drops a “visual album” on HBO. Its called Lemonade. And the entire thing is about how Jay Z cheated on her. Remember early last year when Beyonce’s sister beat up Jay Z in an elevator and the rumor was she was angry about Jay Z cheating? Well that was true. Jay Z was banging this chick: 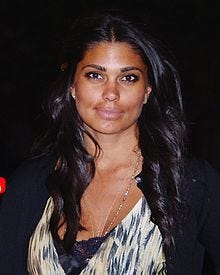 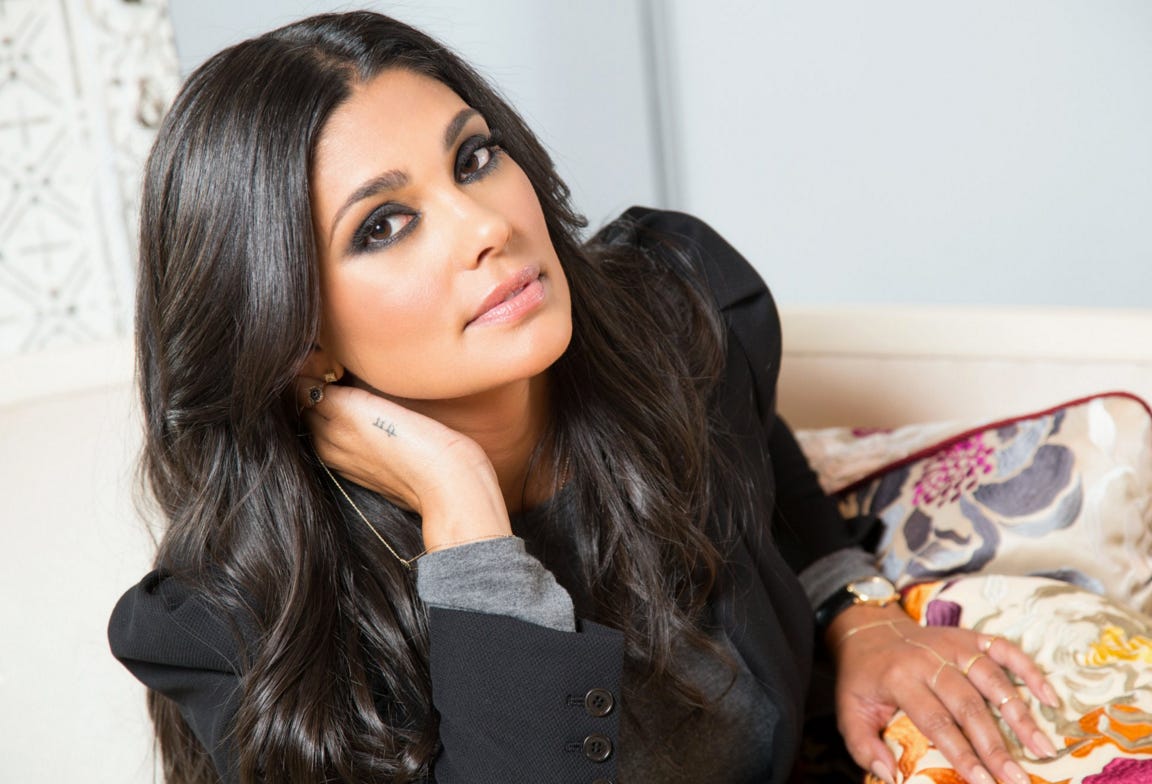 Her name is Rachel Roy. She’s a fashion designer and Damon Dash’s ex wife, for those of you who remember the good old days. Rocafella, ya’ll. She’s clearly a two face monster or some of her photos circulating have been photoshopped to the MAX.

Now, how did people know it was her? In one of Beyonce’s songs she refers to Jay Z fucking a girl known as as “Becky with the good hair.” Quick little aside for the white straight men – “Becky” means white girls. (I guess this chick is white? Again, two face. Cant tell.) Mere minutes after the world heard this line during the HBO special, this Rachel Roy chick puts up an Instagram post cryptically referencing “good hair.” 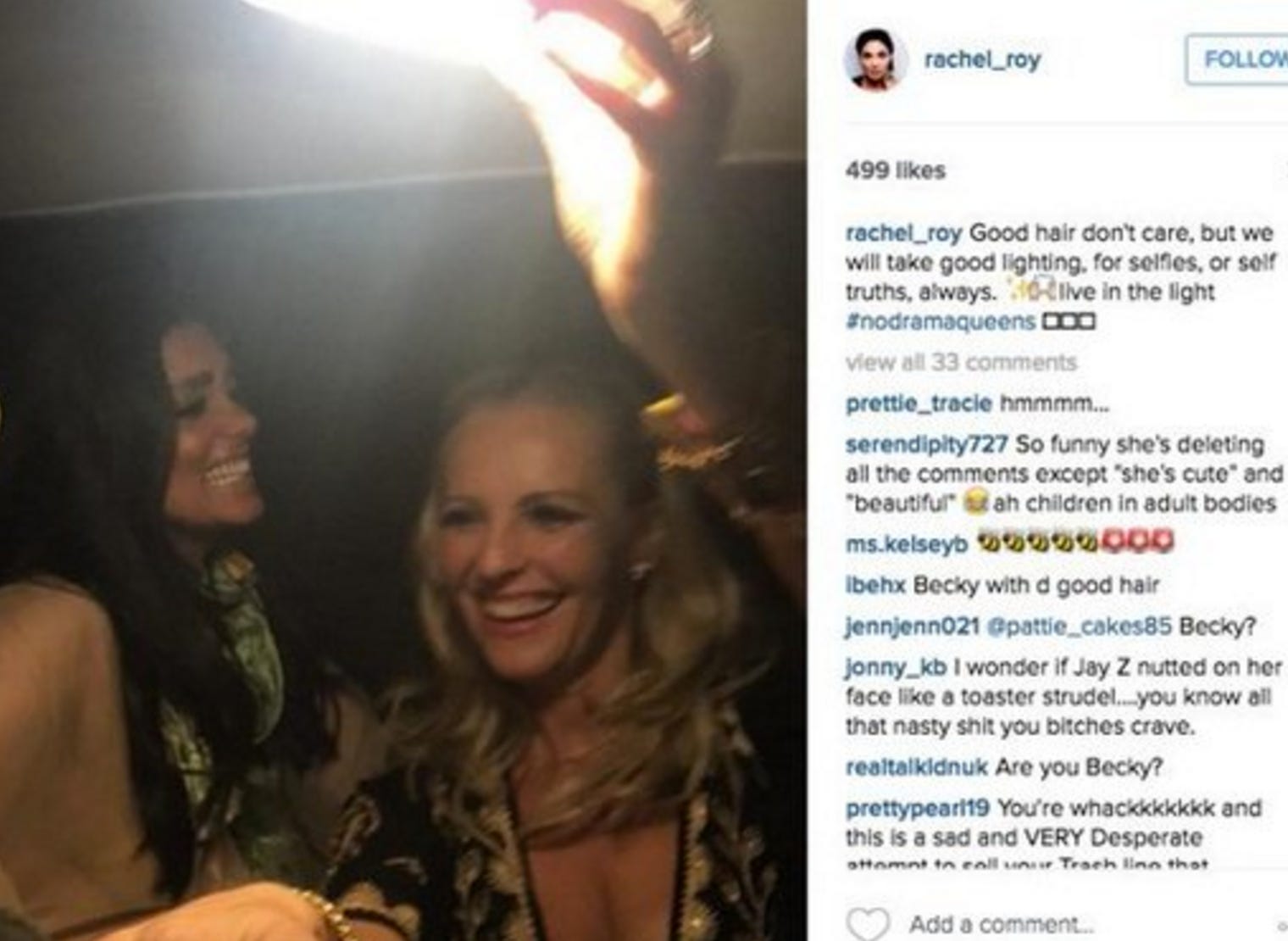 Which is a WILD ass move, if you ask me. More or less putting up a social media post saying “Yup. I’m the one who fucked Beyonce’s husband” is as COCKY as it gets. Not only just putting your hand up like “Yup, thats me. Im the side chick.” But also intentionally incurring the wrath of Beyonce’s notoriously relentless fans, the “Bey-Hive.” Immediately the Bey-Hive went to work on Roy, commenting on her page with the bee emoji, the lemon emoji, all sorts of harassing words, and of course a little Wikipedia tom foolery. 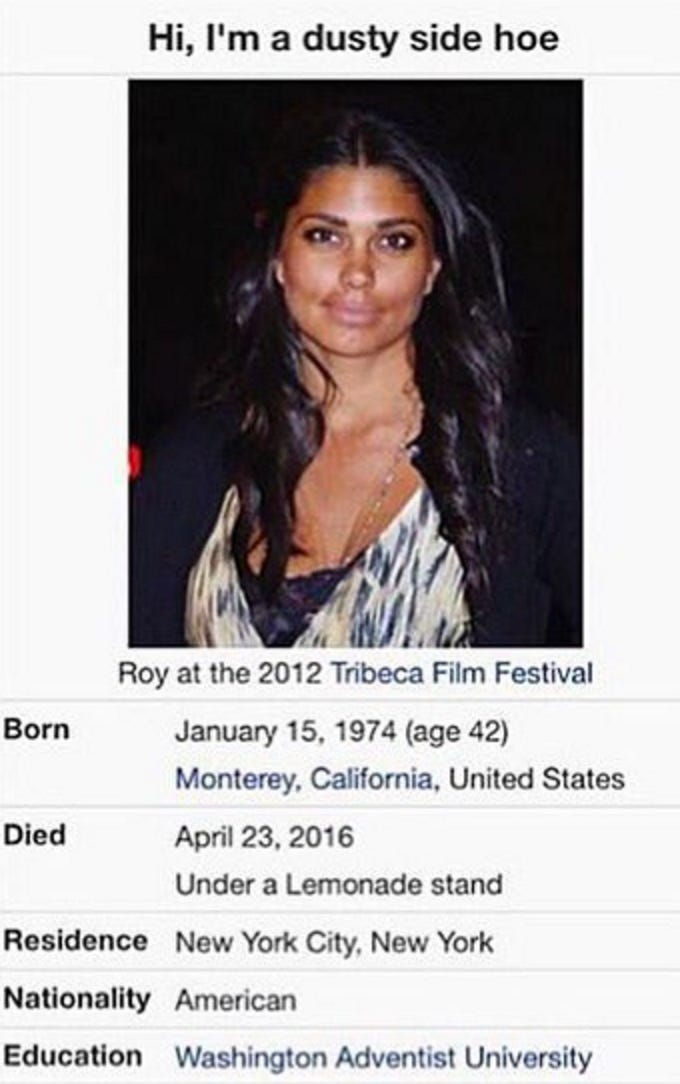 But along with the Rachel ROY, the idiots of Black Twitter also got mixed up and began harassing Rachel RAY. 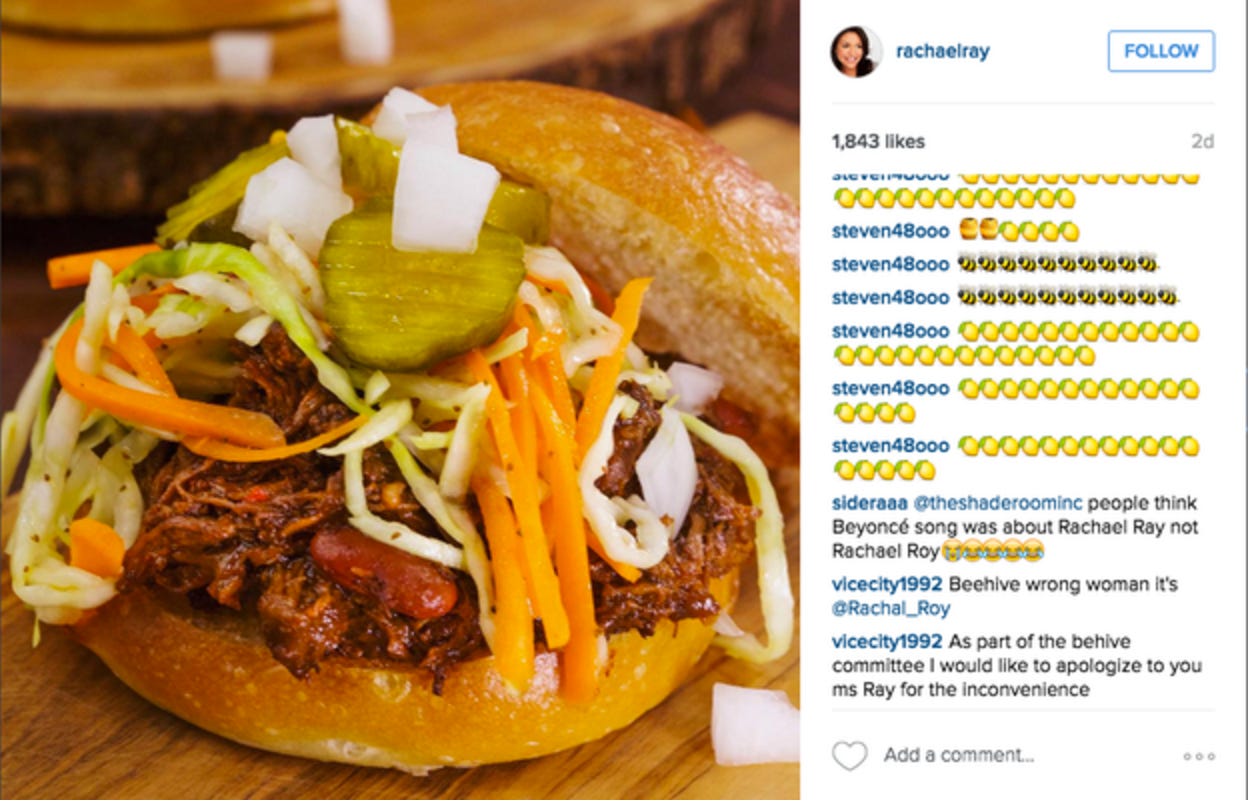 Hollywood Life - “Bitch why u sleeping with Beyonce husband dirty hoe first u cooking sausages now u hoping [sic] on sausages” one person commented on a very innocent pic of Rachel’s dog. “Thirsty bitch. Why you go sleep with Beyonce’s husband? I bet you can’t cook for sh*t. FOH! ““SEWER RAT SAY WHAT I SEEN WHAT CHU DID WITH JAY,”

Again, just to reiterate, a big portion of the internet thought that this chick: 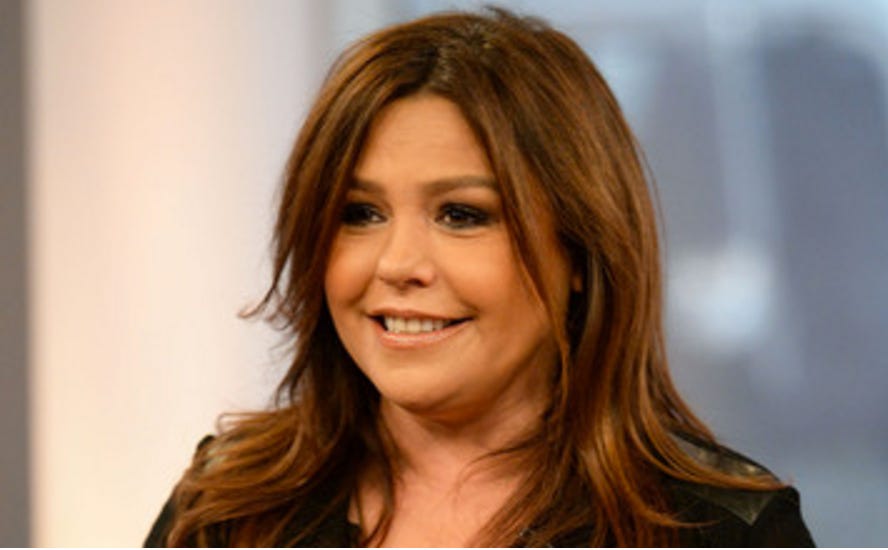 Was this man’s sidepiece: 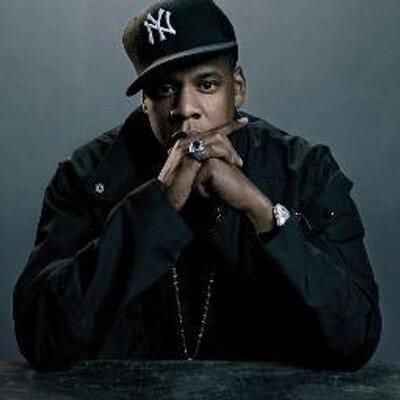 God bless the fuckin internet. I mean, yea I guess Rachael Ray is a little thicky thick. I could see black guys going for her. But the thought that the daytime cooking chick nearly broke up the biggest power couple on earth is hilarious. Rachael Ray just out here trying to post pictures of her pulled pork sloppy joes and the Bey-Hive is calling her a sewer rat and telling her that her mother should have aborted her and shit. If you had one single shred of common sense or took literally 5 seconds to give it some thought, you would realize there is a zero percent chance Jay Z is fucking Rachael Ray. But thats the beauty of the internet. Shoot first ask questions later.

So, Rachael Ray, Rachel Roy, whatever. The point is that Beyonce made an entire album about Hov fucking other chicks. There was a good 20-30 minutes on Friday night where all of Twitter was pretty much convinced Jay Z and Beyonce were done. But the final song on the HBO special was bascically all about how she’ll always love him and shit. There was home footage of them playing around as a family and I guess in the end she’s ok with it. Her album is being released on TIDAL which Jay Z owns so she obviously can’t be too mad. Plus I think at the end of the day this marriage initially started as a PR move anyway. I think mega celebrities like them or Kim and Kanye are pretty much beyond marriage. The idea that anybody that famous, wealthy, powerful, and busy would settle down and have a relationship the same way us peasants do is a joke. These weddings are as close as you can get to the Game of Thrones marriages where you’re uniting houses and shit. Its all just a PR move for more power, money and popularity. The cynic in me says they’re even spinning this whole saga into more dollars. 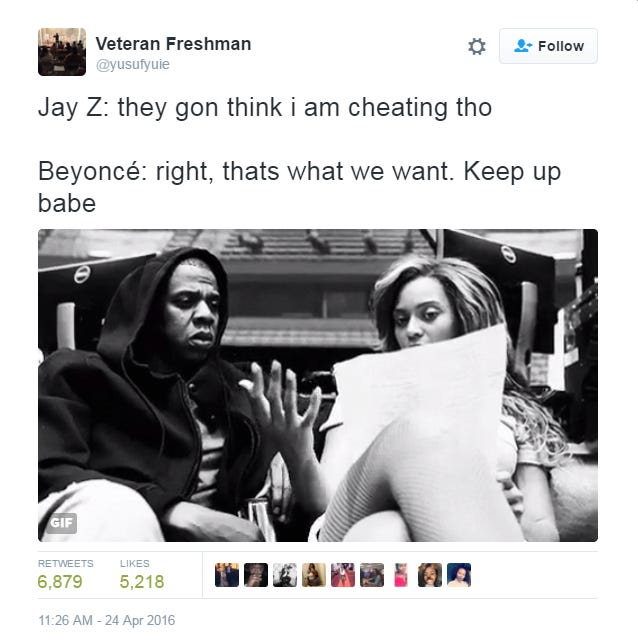 I will say this though – its a tough look for Jay Z either way. Ultimately he’s the dude married to the biggest superstar on the planet and together they will make billions and clearly he just got away with banging chicks on the side. Hard to say that Jay Z “lost” in this situation at all. But at this point Jay Z is pretty much just “Beyonce’s husband.” Hes way past his prime musically, he’s groveling at his wife’s feet, and hes being put on blast by her in her music videos as she’s talking about hopping on other dude’s dicks. Just a tough look for a rapper. Their entire careers are always based on power and confidence and arrogance and swagger and now he’s kinda just been reduced to the guy who had to go crawling back to Beyonce.

I’m just hoping this makes him realize he’s gotta bring the HEAT with his nexst album, if he’s still making any. Best way to avoid all that Magna Carta Holy Grail type of garbage is by lighting a fire under his ass like this.