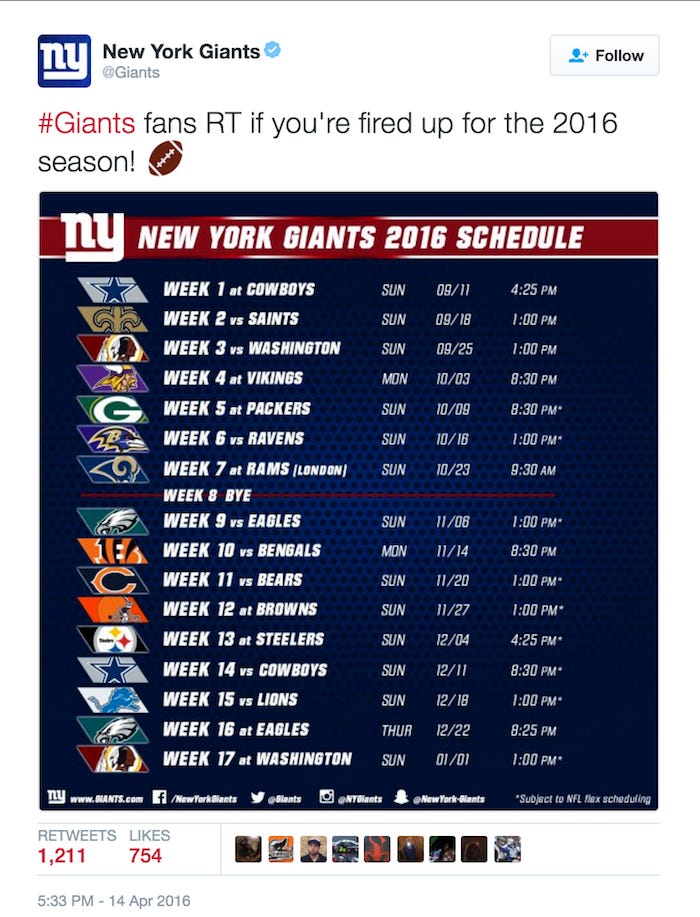 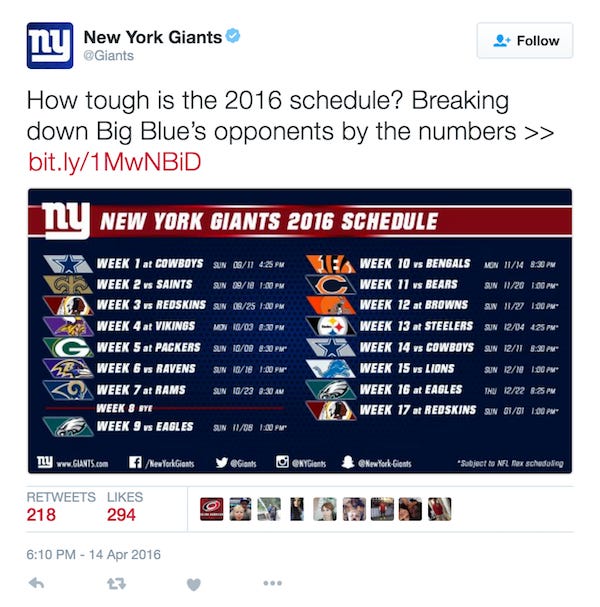 Washington Post- Thursday evening was a big one for die-hard NFL fans, as it featured the release of every team’s 2016 schedule. When the New York Giants’ official Twitter account posted that squad’s slate, however, some observers noticed something odd: Every opponent was listed by its nickname — except for “Washington.” It was especially hard to miss, given that the Giants, of course, play all of their NFC East rivals twice. Was the team making some sort of statement of opposition to Washington’s nickname?

If that is a statement, it’s one that is being made rather haphazardly. The Giants posted two other tweets Thursday featuring a graphic of its schedule, one before the tweet above and one after, and those both utilized “Redskins.” In the story on the Giants’ website to which the tweets link, there is no shying away from the word “Redskins.” That lent credence to this comment, provided to The Post via email, from a team spokesman: “In our graphics, we use ‘Washington’ and ‘Redskins’ interchangeably.” However, the spokesman also acknowledged that “no other team is referred to by both city and nickname.” When asked if the controversy surrounding the name “Redskins” had something to do with that unusual circumstance, the spokesman simply replied that “we use both names.”

What a passive-aggressive, gutless move by the Giants. That team spokesman’s comment is basically when your girlfriend won’t say a word to you, but when you ask if anything is wrong, she says “Nope” with her arms folded and leaves the room. Will someone tell the Mara and Tische families that when you are some of the most popular guys in the NFL and want to make a statement against one of the most hated guys in the NFL, you can just give him a wedgie and stuff him into a locker whenever you please? Especially if an entire race of people, as well as most of his team’s fans, hate his guts. Yeah I understand the NFL is a kajillion dollar partnership, but tweeting out Washington and the changing it to Redskins 30 minutes later is such a half measure. Replace “Redskins” with “Fuckboys” with a picture of The French Connection standing over a chalk outline of Kirk Cousins if you want to make a statement. You don’t think Native Americans would love that shit? Be a hero and take a stand, Mr. Mara. Or at least cut Andre Williams as a mea culpa for fucking all of this stupid shit up in Mets-like fashion.

As for the actual schedule, it looks absolutely perfect to me. In the past, we knew we would go 6-2, lose a few, and then scrap our way to 10-6 or completely fall apart right at the end. Well those days are long gone now. Three divisional matchups in the last four games to end the year means lots can change right before the playoffs. I am happy that the Lambeau game is early in the season when it will still be warm out and I cannot wait for the inevitable stupid, crushing loss to the Browns in Cleveland (If Cleveland isn’t still smoldering ask from the Republican National Convention). And by the time the Giants travel to Pittsburgh, Big Ben will be on one leg with every single weapon of his in a wheelchair or something. Obviously I won’t go too in depth because the NFL changes every week during the season, let alone from mid-April until midseason. Which had me wondering this last night: