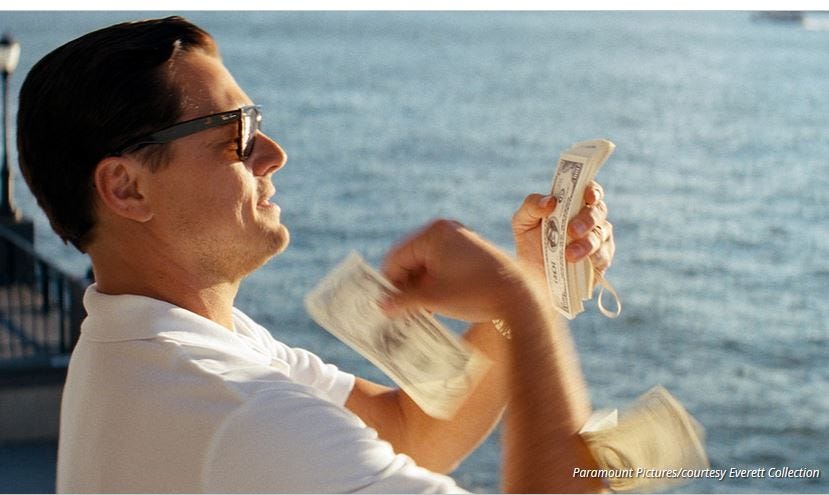 The Independent — When Martin Scorsese and Leonardo DiCaprio set out to make a film about the infamous Jordan Belfort, they were met by rejection. Major studio after major studio turned them down, fearing the controversial story and R-Rating wouldn’t sit well with audiences.

The pair had to find other ways to fund the film, turning to Red Granite Pictures. Many believed the company to be a start-up, having made just one film previously, but somehow they gave the duo $100 million to make The Wolf of Wall Street.

It has since been alleged that the company managed to raise the money by diverting state funding from the Malaysian government into the film; money that was meant to be spent spurring on local economic development rather than on Hollywood movies.

According to an investigation by The Wall Street Journal, the money was supposed to go into 1MDB, a state fund set up by the prime minister of Malaysia, Najib Razak, to boost the local economy.

First and foremost let’s get this out of the way, for I want there to be no confusion. Not looking to get booed off the internet week one:

“DiCaprio and Scorsese themselves are not implicated in any sort of fraud, as any money diverted from 1MDB to Red Granite Productions was before their involvement with the film.”

The obvious storyline here is the irony. A wildly popular movie about swindling penny stock investors and ripping off the little guy getting its entire financial backing from ‘dirty’ Malaysian money wrongfully diverted from spurring economic growth hits right in the sweet spot of shaming hypocrites. And Internet journalism loves shaming hypocrites. So here we are.

But before we go preemptively convicting in the court of public opinion, as is the tradition with modern digital media, let’s understand who and where the story is coming from.

The Wall Street Journal completed a thorough investigation into the funds backing The Wolf Of Wall Street, done mainly by journalists Bradley Hope, John R. Emshwiller and Ben Fritz. All three are deeply credentialed, with Hope making his name on the front lines with Libyan rebels, Emshwiller being the senior national correspondent for WSJ and Fritz focusing specifically on WSJ’s film coverage.

These guys don’t fuck around. When they collaborate on something, I’m buying what they’re selling.

Stealing from the public ain’t good for the public. Diverting government funds meant to spur economic development is extremely detrimental to the struggling 9-5er. And it’s just wrong. Beyond that, all of Malaysia’s commercial airliners disappear in-flight or crash/get shot down by Russia, so what is the populous supposed to do when a) their tax money goes directly to funding Leo’s story about coke and hookers, and b) they can’t leave the region without risking aviational fatality?

An obvious justification for the dirty money might be that Malaysia’s 1MDB Fund, from where the money was diverted, received kickbacks from The Wolf Of Wall Street’s $400 million total grossing.

“The film grossed about $400 million and was nominated for five Academy Awards, including best picture. There is no indication any profits from it flowed to 1MDB or Malaysia.”

Not only did none of the massive profit kick back to the good, aviationally challenged people of Malaysia, but the film didn’t even run there, as “authorities there demanded more than 90 cuts to comply with local morality laws.”

Poor Malaysia. Can’t spur their economy. Can’t fly. Can’t even sit down with some popcorn and soak in the guilty pleasures of watching Leo’s safe word being stifled by candle wax, despite it being funded by their hard-earned Malaysian Ringgits.

How’s that old saying go, the rich get awesome stuff and the poor get fucked, or something like that? Well this is no different. Red Granite Pictures has denied any connection to funding Wolf whatsoever and their success with producing the film has led to the company landing Dumb And Dumber To and Daddy’s Home, with Farrell and Marky Mark.

And they tour Cannes on yachts and hang rather expensive posters in their office. Must be nice:

“It detours through parties in Cannes and aboard a yacht, and spending on such embellishments as a rare, million-dollar movie poster and an original 1955 Academy Award statuette.”