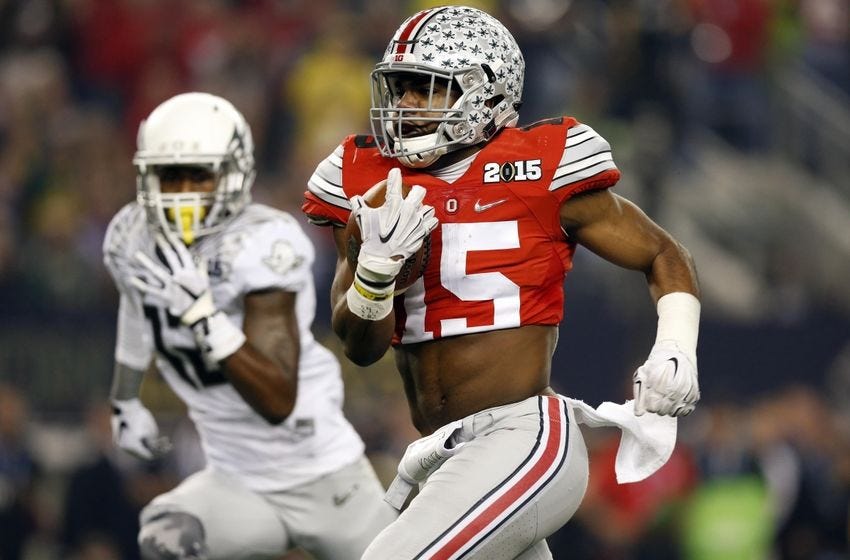 Source – Ezekiel Elliott can see himself winning a Super Bowl as a member of the New York Giants. The former Ohio State player is the top rated running back in this month’s NFL Draft and has been linked to the Giants, who have the no. 10 pick.

Appearing on Fox Sports South “The Panel” Elliott says: “That would definitely be a great spot for me. I can see it now: Eli, Odell and then me — that’s a three-headed monster right there. I think we’d give everyone a run for their money. I think we could go win a Super Bowl pretty early.”

Bold words for someone that hasn’t played a single NFL down. But, you have to admire his confidence. If you’re a top draft pick, your goal should be to contribute to a championship. The Giants are more than a few pieces away from contending seriously, but if Elliott pans out as projected, he will be a critical piece for the team’s championship aspirations.

PS – I HATE that the NCAA and NFL don’t allow the cut-off jersey look anymore. Loved that look, such a badass move, had to be worth at least an additional 23 yards per game for anyone who rocked it.

Original post via @jshector of the BlackSportsOnline.com crew which can be followed @BSO