I was dreading this blog. I saw the McDonald’s go down a few weeks ago and thought well it’s just one thing, change will come slowly. Then in the past week the 7-11 on Sheffield and Red Ivy on Clark both announce they’re closing. Wrigleyville is changing and changing fast. The thing is I know this is part of the deal. The Ricketts and real estate owners in the neighborhood aren’t going to just sit around and not maximize their investment. The renovations in the park were long overdue and now that the big changes are done (jumbotron, clubhouse etc) the changes are going to be coming to Wrigleyville itself. Find me a Cubs fan that doesn’t have a drunken memory from the McDonalds, or a time they spent an August afternoon in Red Ivy because they were too hungover to be out in the sun at Vines. That 7-11, while shitty, was part of the neighborhood. The place you get some last second dip or seeds on the way into the park. And I know this is probably lame to sit here being sad over a 7-11 and a McDonalds but it’s more than that. Change is coming, Wrigleyville will be unrecognizable in 5-10 years. Things will be more corporate and clean and that grit will be gone. Just look at this rendering for Addison and Sheffield. 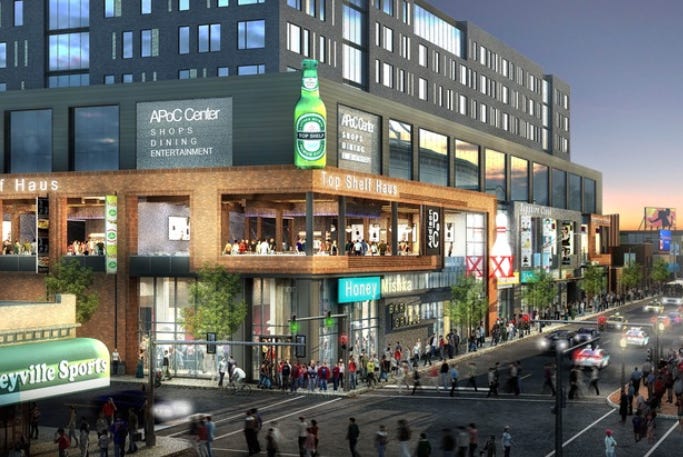 Where are the scalpers and the people selling knock off hats? Where are the homeless people outside of the Starbucks and the guy waving people in to park? And I’m not saying this change is necessarily a bad thing either. The Cubs and the neighborhood are finally catching up with the times, things will be nice and clean and beautiful. But memories will be taken from us these next few years so I’m writing this blog to remind you to soak it all in. Today it’s Red Ivy, tomorrow it will be the Salt and Pepper Diner, the next day the weird Rasta place no one ever goes into. Change will happen, brace yourselves.

Red Ivy really was the perfect “I’m already hungover” bar. That place was so dark in the back. Fantastic spot to bridge the morning’s hangover into the afternoon’s drunk. Start with a bloody mary and a Budweiser, next thing you know you’re drinking some vodka red bulls and all gassed up for the game. Walk out of there for a 1:20 first pitch with a nice buzz and a pep in your step. One of those all time feelings you can’t describe unless you’ve been there.